US, Iraq vow to crack down after blasts 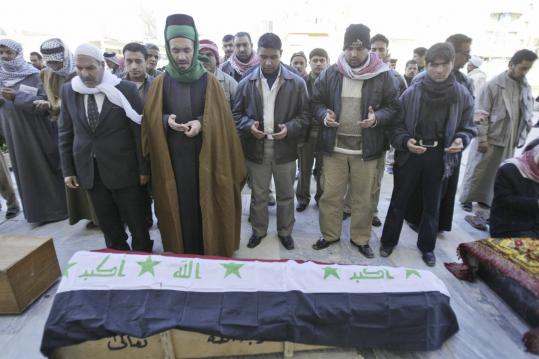 BAGHDAD - A top US commander said yesterday that two bombings carried out by women that killed nearly 100 people in Baghdad last week underscored that Al Qaeda in Iraq remains a serious threat, but he vowed the military would "not give back any terrain" to the terror network.

Iraqis in Baghdad demanded more protection for markets, saying that one of the bombers wasn't searched because she was known as a local beggar and that the male guards were reluctant to search women because of Islamic sensitivities.

US and Iraqi officials said yesterday that pictures showed the bombers had Down syndrome and probably did not know they were being used in Friday's attacks.

Ali Nassir, a 30-year-old day laborer whose hobby is raising birds, said people with disabilities often beg for food and money at the weekly al-Ghazl pet bazaar on Fridays.

"I saw the suicide bomber and she was begging," Nassir said, adding the woman was known to the vendors. "The security guards did not search her because she is a woman and because it is not unusual to have beggars, mainly women and children, moving around in the market."

Iraqi officials, who spoke on condition of anonymity because they were not authorized to release the information, raised the death toll of Friday's attacks to at least 99 - 62 people in the first blast at the central al-Ghazl bazaar and 37 others about 20 minutes later at the New Baghdad area pigeon market in southeastern Baghdad.

Major General Jeffery Hammond, the top US commander in Baghdad, said the women appeared to be unwitting attackers.

"It appears the suicide bombers were not willing martyrs, they were used by Al Qaeda for these horrific attacks," he said. "These two women were likely used because they didn't understand what was happening and they were less likely to be searched."

He reiterated military warnings that Al Qaeda remains a serious threat despite major inroads against the network since Americans began sending about 30,000 extra troops to the capital and surrounding areas in the spring.

"These two suicide vest attacks represent the worst of human nature," Hammond said during a news conference. He said American forces would continue their targeted operations that have succeeded in decreasing attacks.

"We will not give back any terrain here in Baghdad," he said.

Iraqi officials said they had pictures of the two women's heads that were found at the scene that proved they had Down syndrome, and they said the explosives had been detonated by remote control.

Lieutenant Colonel Steve Stover, a military spokesman for the Baghdad area, said, "They were both females and they both looked like they had Down syndrome." Medical specialists with his division had examined the photos and agreed the women probably had the genetic disorder, he said.

The US military, which gave a lower combined death toll of 27, blamed the attacks on Al Qaeda in Iraq and said they signaled a new desperation as concrete blast barriers and other security measures have stanched the group's ability to stage deadly car bombings and similar attacks.

"It sounds like [Al Qaeda in Iraq] has stooped to a new low where they're using people who may not even know what they're doing and strapped something to them and told them go into a market," Stover said.

He said one of the women was carrying a backpack that was stuffed with ball bearings and shrapnel, while the other one was wearing an explosives vest.