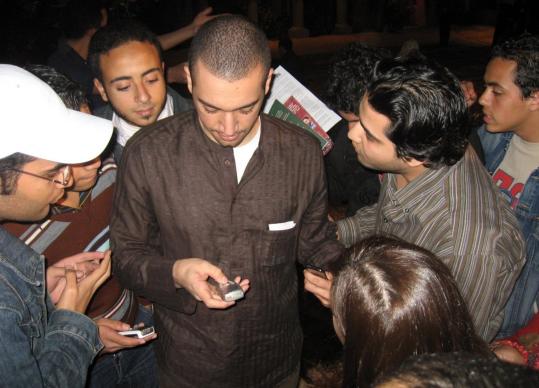 Young supporters crowded around Moez Masoud as he entered his number into their phones so they can send questions via text message. Masoud is one of a number of young Muslim preachers who are promoting an upbeat and tolerant brand of Islam. (Kevin Sullivan/Washington Post)
Email|Print| Text size – + By Kevin Sullivan Washington Post / December 6, 2007

CAIRO - Muna el-Leboudy, a 22-year-old medical student, had a terrible secret: She wanted to be a filmmaker. The way she understood her Muslim faith, it was haram - forbidden - to dabble in movies, music or any art that might pique sexual desires.

Then one day in September, she flipped on her satellite TV and saw Moez Masoud.

A Muslim televangelist not much older than herself, in a stylish goatee and Western clothes, Masoud, 29, was preaching about Islam in youthful Arabic slang.

He said imams who outlawed art and music were misinterpreting their faith. He talked about love and relationships, the need to be compassionate toward homosexuals and tolerant of non-Muslims. Leboudy had never heard a Muslim preacher speak that way.

"Moez helps us understand everything about our religion - not from 1,400 years ago, but the way we live now," said Leboudy, wearing a scarlet hijab over her hair.

She said she still plans a career in medicine, but she's also starting classes in film directing. "After I heard Moez, I decided to be the one who tries to change things," she said.

Masoud is one of a growing number of young Muslim preachers who are using satellite television to promote an upbeat and tolerant brand of Islam.

Television preaching in the Middle East was once largely limited to elderly scholars in white robes reading holy texts from behind a desk, emphasizing the afterlife over this life, and sometimes inciting violence against nonbelievers. But as television has evolved from one or two heavily controlled state channels to hundreds of diverse, private satellite offerings, Masoud and perhaps a dozen other young men - plus a few women - have emerged as increasingly popular alternatives.

Masoud and others promote "a sweet orthodoxy, which stresses the humane and compassionate" as an alternative to "unthinking rage," said Abdallah Schleifer, a specialist in Islam and electronic media at the American University in Cairo.

As a "contemporary figure," Masoud is fast becoming an influential star among youth from "a middle class full of yearning" who will eventually become decision-makers across the Middle East, Schleifer said. And as a product of American-founded schools in the region, Masoud is able to speak with authority about Western values in a way many others can't. His most recent show, a 20-part series that aired this fall on Iqra, one of the region's leading religious channels, attracted millions of viewers from Syria to Morocco. Clips of the show appeared immediately on YouTube, and fans downloaded more than 1.5 million episodes onto their computers.

"We don't need someone to tell us that if we don't pray, we will go to hell - we need someone to follow," said Adham el-Kordy, 23, an Egyptian who is studying to be a gynecologist. "He talks about things that happen to me every day."

The new Muslim televangelists are riding a satellite TV boom that began after the Gulf War in 1991, when the region's elites were shocked by the power of CNN. The Middle East now has at least 370 satellite channels, nearly triple the number three years ago, according to Arab Advisers Group, a Jordan-based research firm. Among channels that offer news, movies, and music videos are 27 dedicated to Islamic religious programming, up from five two years ago.

On the religious channels, some funded by governments and others by wealthy investors, voices such as Masoud's still compete for attention with extremists'. It is too soon to fully gauge the long-term impact of the youthful preachers, but interviews with viewers as well as religion and media analysts made it clear they are a rising force.

"Governments have realized that the good old days of controlling what people watch on TV are over," said Jawad Abbassi, general manager of Arab Advisers Group. "This has also rattled the religious conservatives. They don't like it that suddenly there is competition."

In her home in northern Egypt, Leboudy teared up when talking about Masoud. "Without satellite, I never would have heard of Moez," she said. "He is something I have been searching for my whole life."

On a recent Monday in Alexandria, the ancient Mediterranean city on Egypt's north coast, more than 1,500 people poured into a huge hall to hear Masoud speak.

The crowd divided by sex, as is customary in much of the Muslim world. Women sat on folding chairs behind men who sat close to the stage on large red carpets. A few women wore black veils covering everything but their eyes, but most wore brightly colored veils that covered only their hair. Many wore tight designer jeans and carried expensive purses. The men were mostly clean shaven and stylish, wearing jeans and Timberland or shoes.

They were mostly in their late teens or 20s, university students or young professionals who had heard about the event on Masoud's website or on his popular page on Facebook.

As the lights came up, Masoud, tall and trim, wearing corduroy pants and a maroon, open-necked shirt, descended stairs at the back of the stage to loud applause.

"Salaam aleikum," he said, urging his audience to bow their heads for an opening prayer. For the next 90 minutes, Masoud worked the stage like a seasoned performer, his voice rising and then falling to a whisper, mixing Koranic verses with jokes and parables.

"We will be responsible to God on Judgment Day," he said, arguing that violence against non-Muslims violates God's will. "He will ask: Did you represent our religion correctly? If you feel happy that non-Muslims are being killed, this is wrong. They are our brothers."

Many Muslim preachers say it is sinful for unmarried women and men to mingle without supervision. But Masoud told his young crowd that while sex before marriage was wrong, it was important for men and women to get to know one another.

"A lot of Muslims act as if we can't enjoy this life, we can only enjoy the afterlife," he said. "That is not right. We should enjoy life, enjoy music and art. This life is ours and we should enjoy it." But, he added, "If you really truly love God and feel that all your pleasure comes from God, anything else will pale in comparison."