US officials scale back political goals for unifying Iraq 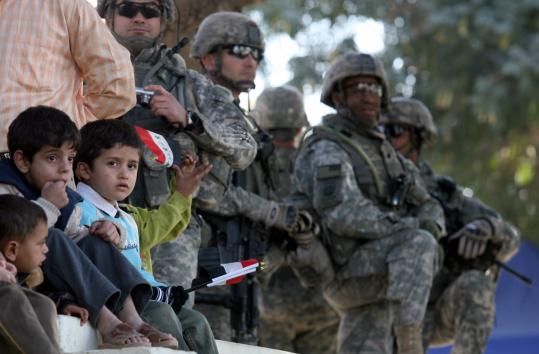 WASHINGTON - With American military successes outpacing political gains in Iraq, the Bush administration has lowered its expectation of quickly achieving major steps toward unifying the country, including passage of a long-stymied plan to share oil revenues and holding regional elections.

Instead, administration officials say they are focusing their immediate efforts on several more limited but achievable goals in the hope of convincing Iraqis, foreign governments, and Americans that some progress is being made toward the political breakthroughs that the intensified military campaign of the past 10 months was supposed to promote.

The short-term American targets include passage of a $48 billion Iraqi budget, something the Iraqis say they are on their way to doing anyway; renewing the UN mandate that authorizes an American presence in the country, which the Iraqis have done repeatedly; and passing legislation to allow thousands of Ba'ath Party members from Saddam Hussein's era to rejoin the government.

The last goal was described by a senior Bush administration official as largely symbolic, since rehirings have been quietly taking place without a law.

Bush administration officials have not abandoned their larger goals and still emphasize the vital importance of reaching them eventually. They say even modest steps, if taken soon, could set the stage for more progress, in the same manner that this year's so-called surge of American forces into Iraq opened the way, unexpectedly, for the realignment of Sunni tribesmen to the American side.

A senior official said the administration was intensifying its pressure on the Iraqi government to produce some limited but concrete signs of political progress.

"If we can show progress outside of the security sector alone, that will go a long way to demonstrate that we are in fact on a sustainable path to stability in Iraq," the senior official said, speaking on condition of anonymity to discuss the administration's planning.

Yesterday, Ryan C. Crocker, the American ambassador to Baghdad, said the military progress had created an opportunity for progress, but warned, "This is going to be a long, hard slog."

While violence has declined sharply since the US troop surge, a bombing last week provided fresh evidence that the insurgency is still strong.

Yesterday, the US military blamed Friday's deadly bombing of a pet market in Baghdad on Iranian-backed militants, raising concerns that escalating activity by Shi'ite extremists could jeopardize the relative calm.

Four members of a Shi'ite cell were captured and charged with carrying out the bombing, which killed at least 15 people, the Associated Press reported. Rear Admiral Gregory Smith, a US military spokesman, said the attack bore the hallmarks of a group of Shi'ite militia fighters who have been trained by Iran and have broken with cleric Moqtada al-Sadr, who called on his supporters to stand down in August.

Overall, the White House has been elated by the decline in violence that followed the increase in American forces, now totaling 162,000 troops. Its public response, however, has been muted, reflecting a frustration at the lack of political progress, a continuation of a pattern in which intense American efforts to promote broader reconciliation have proved largely fruitless.

"We can't pass their legislation," a senior American official in Baghdad said. "We can't make them like each other. We can't even make them talk to each other. Well, sometimes we can. But we can help them execute their budget."

Officials in Washington and in Baghdad share the view that military gains alone are not enough to overcome the deep distrust among Iraqi factions caused by nearly five decades of dictatorship and war. And in both capitals there are leaders who continue to hold out hope for broad political gains, eventually.

Crocker drew a distinction between the effectiveness of the American military buildup in quelling violence and the influence the United States could bring to bear at a political level, where the Iraqis must play the decisive role.

"The political stuff does not lend itself to sending out a couple of battalions to help the Iraqis pass legislation," he said.

One senior member of Iraq's government, speaking on condition of anonymity, said, "We need a grand bargain among all the groups."

But with that not yet in sight, Bush administration officials said they hoped that securing approval of a few initial steps might lead to more substantive agreements next year, including provincial elections, which the White House wants to see held before Bush leaves office less than 14 months from now.

The prospect of such elections has been politically delicate because of the fear that some regions, like Shi'ite-dominated southern Iraq, are most likely to vote for leaders opposed to a powerful central government that could unite Iraq's regions, ethnic groups, and religious sects.