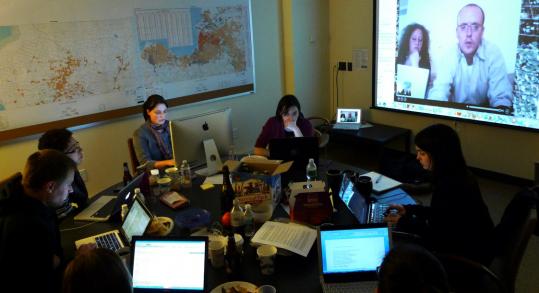 MEDFORD — Almost from the moment the Jan. 12 earthquake rocked Haiti, Tufts University graduate student Patrick Meier knew what he had to do to help: Make a map.

Not a street map, but an online map pinpointing people in need and ways to help them: Children trapped in a collapsed school screaming for help; an 80-year-old woman with a crushed leg who needed evacuation; the location of a drum of water-purifying solution.

Meier enlisted hundreds of tech-savvy colleagues at the Fletcher School of Law and Diplomacy to translate data moving via text messages and social media networks into an online resource, showing real-time updates on where help was most urgently needed or available.

Aid workers quickly saw the value of Meier’s creation. “This really helped us get the aid exactly where it was needed,’’ said Craig Clarke, a civilian intelligence analyst for the Marine Corps. “What they did was beyond valuable. It was gold.’’

Clarke, who helped the Ma rines deploy and operate in Haiti from his intelligence base at Quantico, Va., said he had no doubt that the crisis-mapping operation helped to save lives and get crucial aid to thousands of Haitians in the weeks after the quake.

And now the project may even become even more valuable as the focus lurches from rescue to recovery and rebuilding.

In building his Haiti map, Meier drew on technology developed by a multinational group called Ushahidi, in which volunteers painstakingly calculate precise longitude and latitude readings to locate incidents reported during crises on the radio, or via e-mail, Twitter, and other social media. Launched by activists in Kenya after election violence in December 2007, Ushahidi — Swahili for “testimony’’ — has already proved vital in several global crises and trouble spots, especially in Africa.

Ushahidi-Haiti has grown dramatically from its first days in Meier’s dorm room, and, later, its home in windowless basement “situation room’’ on campus. At the Fletcher campus nine days ago, Ushahidi leaders trained Boston-area Haitians for the next phase. And near Port-au-Prince over the weekend, Haitians from a nonprofit group neighborhood activist group called Block by Block were working with Ushahidi-Haiti members to turn their own detailed neighborhood surveys into online maps of need.

“It’s a very amazing idea,’’ said James Douglass Lefruy, a Haitian computer programmer who is a Block by Block leader in Croix-des-Bouquets, just outside the capital, speaking by cellphone from his hometown. “If the problem is water, or electricity, then you can map exactly which regions have the problem. And it can be used not only for crises, but for other purposes, too.’’

One reason for Ushahidi-Haiti’s success lies in the profile of the Fletcher School’s graduate students, who, with an average age of 28, already have an impressive range of global experience. Fletcher’s academic dean, Peter Uvin, said, “if you look at the crowd who took early leadership, they all have prior, relevant experience; Patrick had done early-warning work in the Horn of Africa for years. They don’t start from scratch.’’

Take Meier himself: Born in the Ivory Coast, he moved with his family to Kenya at age 7, and then to Austria at 14. Now 32, he is a fourth-year doctoral student, and a resident adviser on campus. It helped that Meier was already an expert in crisis mapping. On a family visit to Nairobi, he watched Ushahidi spring into action to track election violence.

Meier, who was then leading a crisis-mapping project for the Harvard Humanitarian Initiative, instantly saw the practical value of this “crowd-sourcing’’ approach for other disasters. He helped Ushahidi get US funding, and drew in the Harvard humanitarian program as a partner. He is on the Ushahidi board, and also is a cofounder of the International Network of Crisis Mappers, which links many organizations developing crowd-sourcing for humanitarian work.

“It is unprecedented, what we’re doing,’’ Meier said.

The night of the Haiti quake, Meier called Ushahidi’s lead tech developer, David Kobia, a Kenyan living in the United States, and they got a Haiti website established within an hour. The early crisis reports mapped there were heartbreaking.

One from that first night reads: “To anyone in the MontJoli-Turgeau area. . . . Jean-Olivier Neptune is caught under rubbles of his fallen house . . . he is alive but in very bad shape, please please please hurry and get there as soon as you can, and please put this info in your statuses. 8 rue Mont-Joli Turgeau! URGENT.’’

The first reports were mostly about damage and missing persons, and then they moved on to reports of hunger, water shortages, and health issues. The volume of information quickly proved overwhelming.

“On day two, I was just mapping, mapping, mapping,’’ Meier recalled. “I couldn’t keep up with the explosion of information. So I sent an e-mail to the Fletcher School listserv, and said I need help.’’

More than 300 Tufts student volunteers worked on the project at its peak.

An early volunteer was Carol Waters, a Fletcher master’s degree student from Seattle who calls herself a global “conflict junkie’’ and has worked in the Mideast, Asia and Africa.

“We started making a difference really early, and people started to turn to us,’’ Waters said. “Our added value, and why everybody came to us and stayed with us for the first six weeks, is we accurately geocoded incidents like nobody else.’’

Vital help came from the US government, which declassified satellite imagery from Haiti a day after the quake, and deployed unmanned drones over the island to gather more data on the damage.

A couple of days after the quake, Katie Jacobs Stanton, a US State Department special adviser in the Office of Innovation, helped persuade Haiti’s cellphone companies to assign a temporary short-code emergency number — 4636 — to give the public a quick way to relay information that could be passed on to responders.

The wave of 20,000 text messages that followed over the next several weeks triggered another critical need — translators.

Rob Munro, a doctoral student in computational linguistics at Stanford University, recruited more than 1,000 Haitian Creole speakers in the US, Canada, and Europe to read the incoming SMS, or short message service, texts and translate them, usually within 10 minutes. He said some of the helpers had lost family members in the quake, and wanted a way to contribute, even at a distance.

The next phase for Ushahidi-Haiti includes handing the system over to Haitian organizations this summer. And the key to that will be to swiftly build up Haitian expertise. At a new technology center in Mirebalais, a regional center north of Port-au-Prince, nonprofit groups are training scores of Haitians to collect, translate, and download the data, creating jobs in the process.

Meier said SMS texts generated many of the 3,500 incidents that Ushahidi-Haiti has mapped since Jan. 12. But his current frustration is getting Haitian and international authorities to agree on a permanent emergency short-code to let people press on as crowd-sourcing watchdogs.

“We’ve demonstrated the power of saving lives with short codes and SMS texts,’’ he said. “But it’s going to become a coordinating challenge in the years ahead.’’