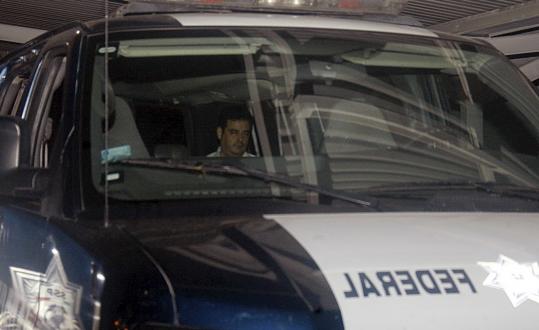 Carlos Beltran Leyva, shown here in a police vehicle at an undisclosed location, was arrested by Mexican authorities in Culiacan, the capital of the Pacific coast state of Sinaloa, where he and his brothers allegedly started their gang. (Mexico Federal Security Secretary via Associated Press)
By Alexandra Olson Associated Press / January 4, 2010

MEXICO CITY - Just two weeks after a chilling reprisal attack for a military raid that killed a reputed drug boss, police have captured one of his brothers, sending a strong message that Mexico will not back down in the drug war.

The Public Safety Department announced Saturday night that Beltran Leyva was arrested in Culiacan, the capital of the Pacific coast state of Sinaloa, where he and several of his brothers were born and allegedly started their gang.

His brother Arturo, the alleged chief of the Beltran Leyva cartel, died during a two-hour shootout with marines in the city of Cuernavaca on Dec. 16. He was the highest-ranking drug suspect taken down since President Felipe Calderon sent tens of thousands of soldiers and federal police across the country three years ago to fight brutal drug gangs.

Mexican officials in the past have described Carlos Beltran Levya, 40, as a key member of the gang, but it was unclear if he took over as chief of the cartel after his brother died.

A third brother, Alfredo, was arrested in January 2008. At least one other brother, Mario, remains at large and is listed as one of Mexico’s 24 most-wanted drug lords, with a $2 million reward offered for his capture.

Carlos Beltran Levya was not included on the list, although the Public Safety Department said there had been a warrant for his arrest since 2008.

The arrest gave Calderon back-to-back victories in the drug war and underscored the government’s determination to destroy the Beltran Leyva cartel despite the threat of reprisal attacks.

Days after Arturo Beltran Levya was killed, gunmen massacred the mother and three other relatives of the only marine who died in the Dec. 16 shootout in Cuernavaca. The brutality of the attack - staged just hours after the marine was buried in a public ceremony - shocked Mexicans who have increasingly been numbed by daily reports of drug violence.

Calderon vowed he would not be intimidated by reprisals. However, authorities were far quieter in announcing Carlos Beltran Levya’s capture, waiting three days to make the arrest public in a terse statement Saturday night.

Chance and Mexico’s intelligence system appeared to have led to Beltran Leyva’s capture.

The attorney general’s office said a citizen tipped authorities to the presence of an armed man in the Canadas neighborhood of Culiacan. Beltran Leyva gave federal police a driver’s license that identified him as Carlos Gamez Orpineda, but when the police ran the document by Mexico’s Center of Intelligence they learned it was false.

The Beltran Leyva brothers allegedly worked side by side with Joaquin “El Chapo’’ Guzman, the leader of the Sinaloa Cartel, before breaking away in recent years and seizing lucrative drug routes in northeastern Mexico.

Officials from the US Drug Enforcement Administration, whose intelligence information helped track down Arturo Beltran Leyva, have said one of the brothers would likely take his place. DEA intelligence chief Anthony Placido said last month the US was getting sporadic reports of plots to break Alfredo Beltran Leyva out of prison.

Still, it is unclear how much damage has been done to the Beltran Levya cartel, or how much the recent blows to the gang might curb the flow of cocaine and other drugs to the United States.

The Arellano Felix cartel survived the downfall of the two brothers, although it has been increasingly in disarray, fighting for turf against a breakaway gang.

While a victory for the Calderon government, the recent success against the Beltran Leyva brothers has raised fears of a similar intensified battle over areas controlled by the beleaguered cartel. Already, more than 15,000 people have been killed in drug violence since Calderon took office in 2006.

In a possible sign of that fight, the bound, beaten bodies of two men were found Wednesday hanging by their necks from a highway overpass in the Sinaloa town of Los Mochis.

Nearby, a message written on a piece of cardboard said in part that “this territory already has an owner.’’ The message appeared to be from the Beltran Leyva cartel.