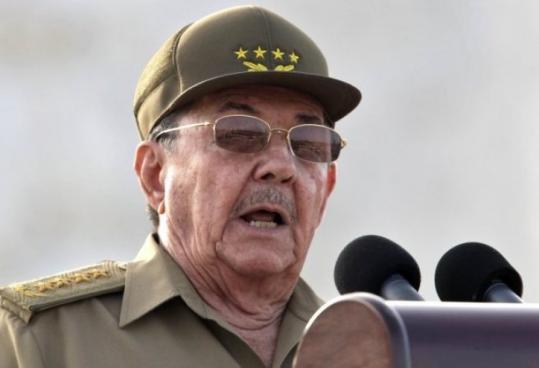 HOLGUIN, Cuba - The global economic crisis means tougher times ahead for Cuba, but the country has no one to blame but itself for poor farm production that leads to shortages of fruits, vegetables, and other basics, Raul Castro said yesterday.

In a speech marking Revolution Day, Cuba’s president said the island can’t pin all of its problems on Washington’s 47-year-old trade embargo. He implored Cubans to take better advantage of a government program begun last year to turn unused state land over to private farmers.

“The land is there, here are the Cubans,’’ he said, pounding the podium. “Let’s see if we get to work or not, if we produce or not, if we keep our word.’’

The line did not get much of a response from the crowd, but Castro called agricultural production Cuba’s top priority and a matter of national security. “It is not a question of yelling ‘Fatherland or death! Down with imperialism! The blockade hurts us,’ ’’ he said, referring to US sanctions begun in 1962. “The land is there waiting for our efforts.’’

Unlike during his past two holiday speeches, Castro did not address the crowd with a sculpture or banner of the face of his brother, Fidel, nearby.