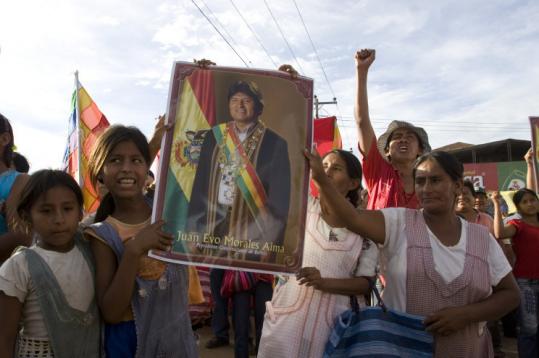 LA PAZ, Bolivia - Four Bolivian provinces forged ahead yesterday with plans for regional autonomy, in a challenge to President Evo Morales that has raised fears of political turmoil in South America's poorest country.

While rightists in the opposition-led provinces put the finishing touches on plans for greater independence from the central government, thousands of Morales supporters wearing ponchos and banging drums marched in the capital of La Paz to celebrate the writing of a new constitution.

The revised constitution would establish a multiethnic state with self-governing regions for indigenous groups. The provinces, led by the economic hub of Santa Cruz, bitterly oppose the changes, and yesterday they made separate declarations of autonomy.

In Santa Cruz, hunger strikers called off their days-old protest and joined in the celebration of the declaration of autonomy at a mass rally in a city park. Similar events were held in the provinces of Beni, Pando, and natural gas-rich Tarija.

Tensions have risen in the days before the autonomy moves. Morales, an ally of Venezuelan President Hugo Chávez, has ruled out declaring martial law, but he mobilized hundreds of security forces in Santa Cruz and other cities. Government officials have said force could be used if any attempt is made to divide the country.

Street vendors in Santa Cruz were doing a brisk trade in the green-and-white regional flag and the city was calm, though an explosion apparently caused by a Molotov cocktail shook the main court building, local television reported. No injuries were reported.

Morales's constitutional overhaul has deepened long-running divisions between the more indigenous highlands and the more affluent east. "This is a historic day . . . the people will never again be marginalized," Morales told crowds outside the presidential palace yesterday after the president of the constitutional assembly submitted a copy of the new charter.

Morales accused his foes of seeking to split the nation. "We're not going to let anyone divide Bolivia," he said. Leaders of the four lowland regions, home to Bolivia's natural gas fields and agricultural industry, have called the new constitution an illegal power grab since the changes were passed by Morales supporters during an opposition boycott.

Supporters of Morales passed the proposed constitution Dec. 9 in a constitutional assembly boycotted by much of the country's political opposition. Regional leaders in Santa Cruz, a province overwhelmingly opposed to Morales's policies, began collecting signatures yesterday to hold a referendum on the "autonomy statute" - a move followed by officials in the other three provinces.

The four provinces are considered the wealthiest in Bolivia, South America's poorest country. Their collective call for autonomy could give them much greater control over local tax revenues, land titles, and security forces. Bolivia has nine provinces.

"We want the central government to hear our message of nonviolent autonomy," Roly Aguilera, the secretary general of Santa Cruz, said yesterday.

The autonomy statute would allow the province to control about two-thirds of the tax revenues it now hands over to the federal government. It would also give local authorities control over land titles - a move aimed to counter Morales's proposals that seek to break up large parcels of land and redistribute plots to the landless farmers.

After the constitutional assembly passed an early version of its constitution in late November without opposition support, clashes in the city of Sucre left three people dead and hundreds wounded. Each side blamed the other for provoking the violence and warned of further incidents this weekend. About two hours west of Santa Cruz, 250 supporters of Morales and the proposed constitution blocked a highway yesterday to protest the provincial government's calls for autonomy. The demonstrators said the leaders of the autonomous movement are wealthy businessmen and landowners who want to preserve the country's status quo of inequality.

A representative from the Organization of American States, which has offered to help mediate the crisis, arrived in Bolivia on Friday. Morales's government also met on Friday with European diplomats who also have offered to serve as mediators to help defuse the crisis.

Material from the was included in this report.