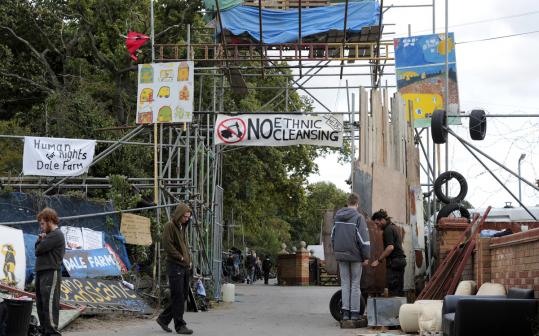 Dale Farm was founded in 2001 when Irish Travelers bought a former scrapyard. It is situated next to a legal Travelers’ site. (Carl Court/AFP/Getty Images)
By Jill Lawless Associated Press / September 18, 2011

CRAYS HILL, England - Vivien Slattery has lived her whole life - all 16 days of it - in a tidy mobile home, one of dozens more like it on a crowded site beside green English fields. Her mother grew up here, surrounded by friends and extended family.

Within days, baby Vivien and more than 200 others will be evicted from the settlement east of London, the losers in a decadelong battle between local officials and their community of Irish Travelers that has drawn attention around the world and concern from the United Nations.

The local authority says it is a simple planning issue - the 86 families lack permission to pitch homes on the land. The Travelers - a traditionally nomadic group similar to, but ethnically distinct from, Gypsy or Roma people - call it ethnic cleansing.

“There’s no need of it. There’s no need for them to treat us the way they are treating us,’’ said 23-year-old Kathleen Slattery, feeding her infant daughter a bottle of milk.

“They just want us gone. They want us to vanish in thin air,’’ she said. “They’re not even taking a 2-week-old baby into consideration.’’

The conflict over the settlement, known as Dale Farm, has raged since 2001, when Travelers bought and settled on a former scrapyard next to a legal Travelers’ site 30 miles east of London. The local authority waged a long legal battle to remove them, which it finally won at Britain’s High Court last month.

The evictions are scheduled to begin today, after an appeals judge on Friday rejected a last-minute legal bid by the Travelers.

The feud’s roots are much older, buried in centuries of mistrust between the nomads and the much larger settled community in Britain.

“There have always been conflicts between nomadic and settled communities,’’ said Jake Bowers, a Gypsy writer and editor of the publication Travelers’ Times. “I think it is made worse in this country. The British have a great deal of enthusiasm for their homes being their castles and there is a perception that Gypsies bring down property prices.’’

There are an estimated 15,000 to 30,000 Irish Travelers in Britain, where they are recognized as a distinct ethnic minority by the government. Their roots - and their broad brogue - lie in Ireland, but many have been in Britain for generations.

But during the past few decades, laws limiting unauthorized camping, economic changes, and a desire to see their children educated led many to settle down - sometimes legally, on land provided by the government, and sometimes without permission.

They are rarely popular with the neighbors, who complain about crime and noise.

The eviction campaign appears to enjoy wide public support in the area. Local newspaper letter pages and Internet forums are largely hostile, with many commentators using derogatory terms for the group.

The site has few immediate neighbors, but Len Gridley, whose house backs onto Dale Farm, has said the Travelers have made his life hell for a decade. Last month, he was arrested after trying to set fire to a fence.

Traveler evictions are relatively common across Britain - but few are as large, or as high-profile, as that at Dale Farm. Academy Award-winning actress Vanessa Redgrave has come to the community’s support, and the UN Committee on the Elimination of Racial Discrimination urged authorities “to find a peaceful and appropriate solution’’ to the crisis.

Yves Cabannes, a UN adviser on forced evictions, said last week that Britain was violating international laws by kicking out the Travelers.

Tucked into the Essex countryside east of London, Dale Farm is a straggling six acre village of shiny trailers, and some larger permanent-looking homes, set along narrow lanes.

Most of the residents have been here for years; they have electricity, running water, and garbage collection. Their children attend the local school.