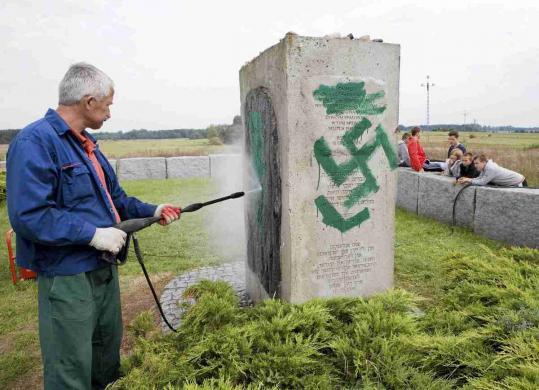 A man cleaned a defaced monument that marks the site of the mass killings of Jews in Jedwabne, Poland, during World War II. (Jendrzej Wojnar/Agencja Gazeta/Reuters)
Associated Press / September 2, 2011

WARSAW - Vandals desecrated a monument marking the spot in Poland where hundreds of Jews were burned alive during World War II, scrawling “they were flammable’’ and a swastika on the memorial.

The government, Poland’s Jewish community, and Holocaust survivors yesterday strongly condemned the attack on the site, which marks one of the most notorious cases in which local people collaborated with Nazis in killing Jews during the German wartime occupation.

Vandals used green paint to spray the symbols of a swastika and “SS’’ - the name of an elite Nazi force - on the monument, as well as the phrases “I don’t apologize for Jedwabne’’ and “they were flammable.’’

Police discovered the desecration Wednesday during a patrol and are trying to find the culprits. Radek Sikorski, the foreign minister, expressed solidarity with anyone affected by the act and said he was convinced the perpetrators would be tracked down soon and face justice.

The head of Poland’s Jewish community, Piotr Kadlcik, called on authorities to crack down harder on anti-Semitic incidents, saying the desecration at Jedwabne comes after authorities have treated such cases with leniency for years.

The massacre came to light only a decade ago with the 2000 book “Neighbors: The Destruction of the Jewish Community in Jedwabne, Poland,’’ by sociologist Jan Tomasz Gross, which sparked controversy and soul-searching in Poland.