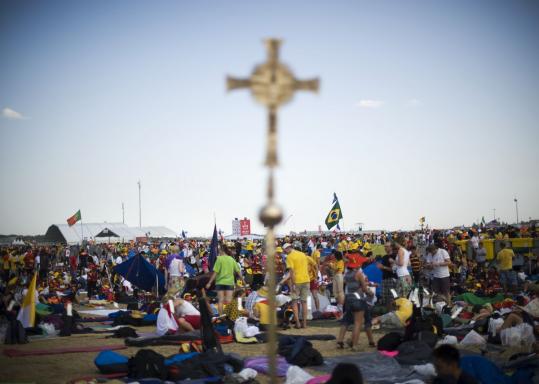 DAVID RAMON/GETTY IMAGES
Pilgrims set up their camp in Madrid yesterday during a vigil as part of the World Youth Day festival, a celebration of the Catholic faith that is held every three years. (David Ramon/Getty Images)
By Harold Heckle and Nicole Winfield Associated Press / August 21, 2011

Firefighters sprayed the crowds with water from engine hoses, and pilgrims sought shade from umbrellas, trees, tarpaulins, and tents in a bid to stave off the near 104 degree heat. Later, a flash downpour drenched the crowds and forced Benedict to suspend his remarks.

Despite the discomfort, the scene at the Cuatro Vientos airport was nevertheless festive and colorful, with pilgrims in a rainbow of sun hats dancing, singing and waving their national flags as they geared up for a massive sleepover to be in place for the main World Youth Day Mass.

“There is a truly awesome number of people here and we have come to join them to celebrate our Christianity in the most universal and Catholic sense,’’ said Joe Melendrez, a rap artist from San Antonio, Texas.

The crowd erupted in cheers when Benedict arrived at nightfall, greeted by Spain’s crown Prince Felipe and Princess Letizia. Once it became clear he couldn’t proceed with his speech because of the rains, organizers told the crowd that they had asked for more water during the day when it was so hot, and their prayers were answered.

This is Benedict’s third World Youth Day, the once-every-three-year gathering of young Catholics from around the world that was launched a quarter century ago by Pope John Paul II in a bid to reinvigorate and spread the faith among the young.

It has the feel of a weeklong rock concert and camping trip, with bands of flag-toting pilgrims roaming through Madrid’s otherwise empty streets to take part in prayer and education sessions, Masses, cultural outings, and papal events.

“I haven’t been able to catch the pope’s exact words because he has spoken only in Spanish but it is an amazing experience to share these moments with so many people from so many different countries,’’ said Joseph Maduma, a 16-year-old student from Tanzania as he awaited the vigil.

“We have come to spend the night here and really look forward to meeting lots of new friends,’’ he said.

Nearby a group of six people from southern China fanned and shaded one of their own, a young woman who was obviously overcome by the heat. News reports said some 800 people had sought medical care and that extra water had been trucked in.

With an hour to go before the vigil began, organizers told the crowd their numbers had surpassed a million.