From Ireland... to the United States (again) 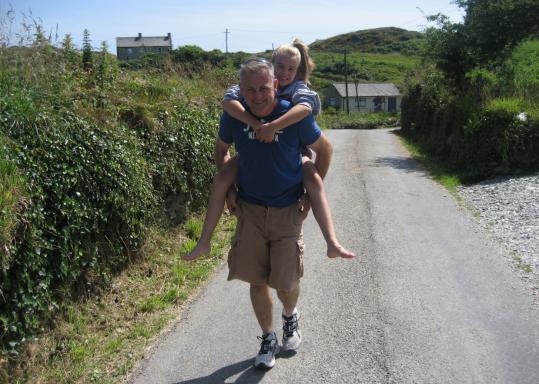 Jim McLoughney and his daughter, Sarah, on a recent visit to Ireland. In 2000, the family moved there. (Kay Mcloughney)
By James F. Smith Globe Staff / August 13, 2009

The Irish are coming, again.

Call it the third green wave. It is a much smaller migration than its predecessors - the historic westward flow that gave Boston its Irish identity, and then, in recent years, the return home of thousands of Irish emigrants seeking to ride the Celtic Tiger, the roaring Irish economy.

But now, with Ireland deep in recession, far deeper even than ours, thousands of its residents are again heading abroad; nearly twice as many people left Ireland in 2008 as four years earlier. And some of them are heading to the United States for the second time.

“People are leaving Ireland every week. They’ve nothing in Ireland to hold them there. They’re in the same boat as myself,’’ said Brendan McDonagh, a 26-year-old construction worker who was born in the United States to immigrant parents, grew up in Ireland, and came back last summer when he got an offer of steady work with a Boston construction firm.

It’s relatively easy for McDonagh, a US citizen, to come and go, as it is for those who left yet maintained their permanent resident status in the States. But for others who let their “green cards’’ lapse, and for the many young Irish people who would like to come here, there’s a formidable new obstacle. They are running headlong into far tougher American visa restrictions, prompting many emigrants to look to Europe or Australia instead.

Many looking to leave are fleeing the devastating downturn in Ireland. But there are other factors behind the returning wave. Some families who went home so their children could go to Irish schools and learn the Gaelic language found they prefer American schools after all. Some who felt that Ireland, at some level, would always be home are returning now because they didn’t quite fit in back in the old country. Ireland had changed, or they had.

“I didn’t want my kids to be the American cousins that no one knew very well. That was our reason for going back to Ireland,’’ said Mary Casey of Cohasset, an Irish-born woman who returned to Boston in April after five years back in Ireland. She said her husband had a good job there, and they loved being near their extended family, “but we found we had just gotten too used to life over here. We really missed Boston.’’

Like many traditional young Irish emigrants, Casey had first come to the United States after high school, and stayed for 16 years, becoming a US citizen. But the family felt driven to try Ireland again.

“The one thing, having gone back, is that I’ve gotten the yearning to go home out of my system,’’ she said. “I might never have settled properly here. . . . Now this is home.’’

Brian Foley, an actuary who lives in the South End, was among the many who left Ireland during the deep downturn in the 1980s. He recalled unemployment near 20 percent. He got a job offer in London in the mid-1980s, and joined the Irish exodus there. “Of my group of friends, 75 percent emigrated, and most of them later went home again,’’ he said.

Foley came to the United States on vacation, visiting cousins in Hartford, and liked it. He got his firm to transfer him to Hartford in 1989 on a work visa, and stayed at first with his grandfather, who had emigrated long before him.

Foley moved to New York in 1993, got his MBA at New York University, and got one of the 40,000 visas created specifically for Irish immigrants under a 1990 program fostered by Bruce Morrison, a congressman from Connecticut.

But in 1999, Foley was laid off and “started to get a bit homesick. I needed to go back to the mother ship for some TLC,’’ he said. He stayed in Ireland for six years, setting up his own consulting firm. Then, as the Irish boom went bust, he found a job in Boston, as an actuary with a major insurance company.

“The island I went back to then was not the country I had left in 1986. I suddenly had millionaire friends, in construction and IT,’’ Foley said. “But by 2006, I felt that it was a small place. I was not impressed by the way Ireland had gotten complacent.’’

Sheila Gleeson, director of the Brighton-based Coalition of Irish Immigration Centers, says her member organizations around the country have seen a steady flow of new and returning immigrants.

Gleeson said that while the US economy is in very bad shape, in Ireland “the doom and gloom is palpable. Things haven’t picked up at all.’’

In Ireland, the Economic and Social Research Institute projects that unemployment will average over 12 percent this year and that the gross national product will shrink a disastrous 9 percent in 2009. A recent report estimates that net Irish emigration from 2010 to 2015 will total between 126,000 and 150,000, a complete turnabout from the unprecedented net immigration to Ireland of the 1990s and 2000s.

But it’s much harder to get into the United States than it once was. The tougher immigration rules are keeping the revived flow to the Boston area relatively modest, probably in the hundreds rather than the thousands, specialists say.

Kieran Conway, a banker in Dublin, returned to Ireland in March 2007 after 15 years in America. He’s still employed, but is weighing his options for the longer term and was fortunate to have kept his green card valid, but he said he knew others who had not bothered and now were feeling trapped.

Unlike the 1980s, he said by phone from Ireland, “this time, there’s a global downturn, and post-9/11, the same tolerance is not afforded to you turning up in the States. So a major problem we’re going to have is that people who want to go have nowhere to go. The safety valve that that afforded us in the past is closed.’’

One popular option for Irish emigrants in recent years has been Australia. Young Irish have gone Down Under in droves in the last few years, on short-term work visas that are far harder to get for the United States.

In the absence of such visa options, many think the number of those here illegally is already rising.

Chris Lavery, an Irish immigration lawyer who works with the Irish Pastoral Center in Quincy, said, “We’re seeing a lot more young people coming over, and a lot more people who were here before coming back, with lawful or unlawful status.’’

Those who have traveled back and forth say, without exception, that they love both countries and feel part of both. For those who have emigrated, the doubts and the questions of loss and sacrifice loom as large as the potential benefits.

Her husband, Jim, born in Tipperary, came to Boston in 1986 to work construction. He sold three cows to raise the money to come, and arrived with $300 in his pocket. He got a Morrison visa and exactly five years later, the legal minimum, he applied for US citizenship.

They went home in 2000, to give their three children a chance to be Irish. They stayed two years. “It wasn’t the same Ireland we had left,’’ Jim said. He is now a successful construction supervisor, and he built by hand, nights and weekends, the family’s lovely home a block from the ocean in Quincy.

Still, he said, “when you emigrate, you never emigrate forever.’’ The family spent several weeks in Ireland this summer, visiting family on the farm.

James F. Smith writes about Boston’s global links. His blog is at www.boston.com/worldlyboston. He can be reached at jsmith@globe.com.