A need for music even in cave era 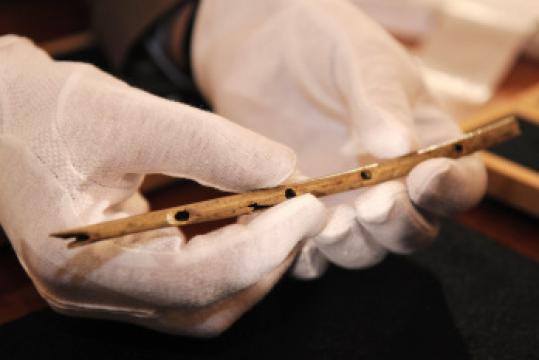 Archeologists said yesterday that they had unearthed the oldest musical instruments ever found - several flutes that inhabitants of southwestern Germany laboriously carved from bone and ivory at least 35,000 years ago.

The find suggests just how integral artistic expression may be to human existence: Music apparently flourished even in prehistoric days when mere survival was a full-time endeavor.

Fragments of the instruments were found in a cave, amid bones from bears and mammoths and flakes of flint from a prehistoric tool shop.

“There were certainly, you know, the Michelangelos back then, who were the highly talented people for carving masterpieces. But the Michelangelos also had to hunt and butcher and chip stones and do all sorts of things,’’ said Nicholas Conard, professor of early prehis tory at the University of Tübingen, who led the work described in the journal Nature yesterday.

The discovery is the latest in a string of archeological finds - including a sculpted female nude - which reveal that even tens of thousands of years ago humans had a sophisticated cultural and artistic life.

“Emotionally, you can look at this thing and recognize yourself; you can see this is a flute, you can imagine yourself playing it, you can imagine yourself making it. It’s essentially a connection between us and people who lived 35,000 years ago,’’ said Edward Hagen, an anthropologist at Washington State University in Vancouver who was not involved in the research. “To see this early in the archeological record suggests it might be a fundamental aspect of human nature. . . . It does at least hint that music lies close to our foundation of common humanity.’’

There are numerous theories about why music emerged. Charles Darwin thought that music might give individuals a better chance of attracting mates and reproducing. Others believe it is a way to demonstrate a group’s strength and unity. Some think that music may be a byproduct of the evolution of other cognitive abilities, such as language.

The discovery of the flutes does little to settle this debate, since many musical traditions - such as singing - wouldn’t have been preserved in the archeological record. But it does demonstrate how established music was, especially since the flutes were mixed in with other remnants from daily life, which indicates to scientists that they were used in many contexts.

Just a few feet away from a bone flute, researchers discovered one of the oldest examples of figurative art - the sculpture of a woman carved from mammoth ivory, a find announced earlier this year. Excavations have also unearthed an array of other art, including carvings of mammoths, cave lions, and mythic half-animal, half-human figures.

The flutes were made by Homo sapiens who evolved in Africa and spread across the world, arriving in Europe around 45,000 years ago. Radiocarbon analysis by two laboratories indicate that the flutes are at least 35,000 years old, and given their distribution in the excavation, Conard estimates that they date back to about 40,000 years ago.

The artifacts may provide clues as to why humans made it to the present day, scientists said, while Neanderthals, a close relative, ultimately went extinct. Over a decade ago, an archeologist discovered a 43,000-year-old bear bone that was thought to be a Neanderthal flute, but other scientists have cast doubt on this claim.

A culture rich in figurative art, sophisticated adornments, and music does not directly result in better hunting or more successful reproduction, but music in particular might have had an indirect effect, providing better social ties or improving communication, according to Conard.

“There is something analogous to a cultural arms race between the [Neanderthals] and the moderns,’’ said Conard. “Neanderthals had perfectly good behavioral strategies, but tended to be culturally more conservative, and modern humans were more flexible and creative.’’

That creativity is seen in the flutes. The most complete flute was excavated in a dozen pieces last September. Archeologists pieced together the flute for display.

Fashioned from the wing bone of a griffon vulture, the flute is about 9 inches long. Fine lines chipped into the bones were probably used as measurements to ensure that the five finger holes were spaced appropriately, the researchers concluded, and musicians likely played the instrument by blowing through V-shaped notches carved in the top of the flute.

Researchers also found evidence of technologically advanced flutes made from mammoth ivory. In the same excavation, they discovered two fragments of ivory flutes, which would have been constructed by splitting a piece of mammoth ivory, hollowing out both halves, carving the finger holes, and sealing them back together.

Another portion of an ivory flute was also discovered at a nearby site.

Other instruments have been unearthed in France and Austria but are no more than 30,000 years old.

To Ofer Bar-Yosef, a professor of prehistoric archeology at Harvard, the making of flutes by humans in Europe seems analogous to the innovation seen among early Americans, who “created socially and technically a new society which is different from what it used to be back home. . . . What happens to a population - they get into a new environment, something triggers them to think about a new invention.’’

“The first thing he sent me is this rendition of the Star Spangled Banner on the oldest flute in the world,’’ Conard said. “He hasn’t really learned it yet. It sounds very rough.’’