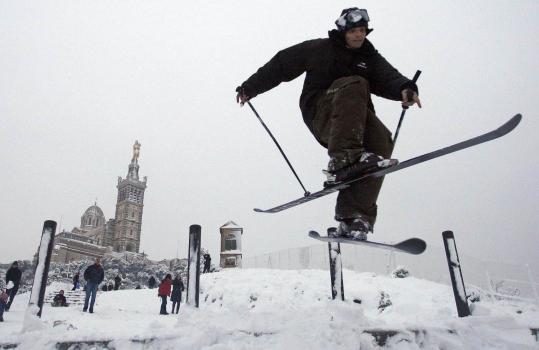 MILAN - Freezing temperatures and exceptional snowfall caused travel delays yesterday across Europe and were blamed for at least 12 deaths, including that of a man in Milan who was crushed when a canopy collapsed under the weight of snow.

In Poland, the Interior Ministry said at least 10 people have frozen to death due to temperatures reaching minus 13 degrees Fahrenheit.

Italian police said a Milan businessman standing on his balcony was killed when the snow brought down a canopy and part of a wall. A 47-year-old Serbian was found frozen to death in his home in the town of Zagarolo, east of Rome.

The winter weather temporarily closed Milan's two airports, halted trains in the normally sunny south of France and pressed into service ice breakers in the Dutch port of Rotterdam. But it also sent Dutch skaters storming onto canals, and earned chimpanzees in Rome's zoo hot tea and cookies.

Milan's Malpensa and Linate airports shut down briefly, then struggled to overcome a morning of delays and cancellations when the facilities reopened in the early afternoon. The city, Italy's financial capital, had to dig out from a foot of snow.

Snow blanketing much of northwestern Italy delayed trains up to three hours as the Italian railway had to slow track speeds. Schools closed in many cities.

A rare snowfall in France's normally sunny Cote d'Azur sent the national railway into crisis mode, halting trains in Provence as well as the Alps. Authorities stopped all buses in the port city of Marseilles and closed surrounding highways, urging drivers to stay home.

In Rome, keepers at the capital's zoo fed primates a special breakfast of warm barley porridge, croissants and cookies to make sure they had enough calories to keep up their body temperatures. At lunch, the animals sipped hot tea along with rice and yogurt.