Abu Dhabi to host naval base 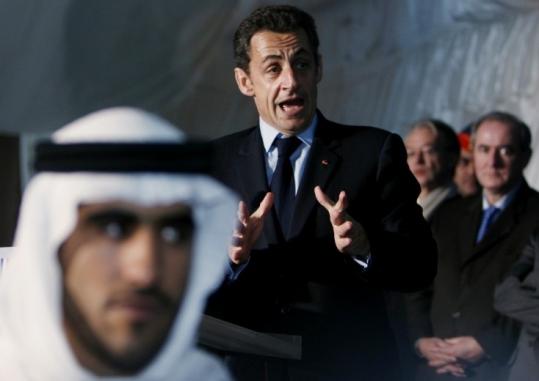 PARIS - In a major strategic shift, France is setting up its first permanent naval base in the Persian Gulf, just across from Iran, President Nicolas Sarkozy announced during a visit yesterday to the United Arab Emirates.

The 400-strong military base will be built in Abu Dhabi, the wealthiest and most influential of the Emirates, and will include a significant intelligence operation, French officials said.

It will make France one of a small number of Western countries alongside the United States to have a military presence in a region that is of increasing geopolitical importance both because of its lucrative gas and oil resources and because of its proximity to Iran.

The agreement is "a sign to all that France is participating in the stability of this region of the world," Sarkozy told reporters after signing the accord, the Associated Press reported.

"France responds to its friends," he said.

"France and the Emirates signed a reciprocal defense accord in 1995. Our friends from the Emirates asked that this accord be prolonged and asked that a base with 400 personnel be opened."

France has long had military cooperation accords with countries in the region, including the Emirates and Qatar. Those accords were signed with the threat of Iraq under Saddam Hussein in mind; today it is Iran's rising influence that is the catalyst.

But the closest French military base to the Gulf has been in Djibouti, a former French colony on the mouth of the Red Sea. That base will be scaled back as a result of the new one.

The United States remains by far the most important Western power in the Gulf.

Not counting Iraq, Washington has a number of military bases with a total of about 40,000 troops in the region. One of them, the US Navy's Fifth Fleet headquarters in Bahrain is also right opposite Iran.

Military analysts and officials said that it would take several months to build the French base and that 400 troops were not enough to deter Iran or significantly shift the balance of power in the region.

But they also said the new base was an important symbolic step that signaled that Paris wanted to play a greater role in the future.

"This is quite a revolution," said a government official familiar with the plan who spoke on condition of anonymity because she is not authorized to speak to the news media.

"We are no longer in our historic sphere of influence.

"Now we're in a country we never colonized."

"Being right opposite Iran is a clear strategic choice," said the official, adding that it would be an "American-style" modern base with high-tech surveillance and intelligence operational capacity.

Under Sarkozy, France has hardened its line on Iran's nuclear program, lobbying alongside the United States for tougher sanctions in the UN Security Council and in the European Union to persuade Tehran to abandon its uranium enrichment program, a technology that can be used to generate nuclear power or, upon further refinement, to build a bomb.

Despite a recent US intelligence report that suggested Tehran halted a weapons program in 2003 but continued to enrich uranium, Washington and Paris have recently stepped up the rhetoric again.

On his trip, which also took him to Saudi Arabia and Qatar, Sarkozy is overlapping President Bush, who stopped off in Abu Dhabi on Sunday and accused Iran of being "the main state supporting terrorism in the world."

Another impact of Iran's ambition to build nuclear facilities has been a rush among Arab countries to look at programs of their own.

France signed a deal on nuclear energy cooperation with the Emirates yesterday, a first step toward the construction of a nuclear reactor with an estimated price tag of up to 4 billion euros, or $6 billion.