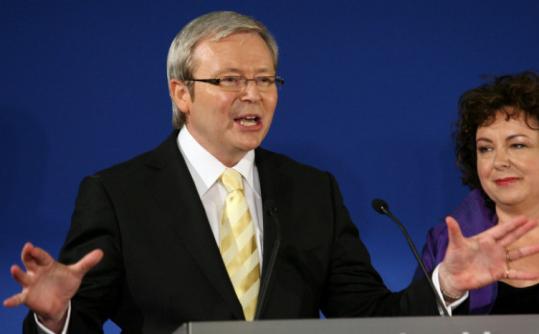 Kevin Rudd thanked supporters yesterday at a rally in his hometown of Brisbane, as his wife, Therese, looked on. (Bradley Kanaris/Getty Images)
Email|Print| Text size – + By Rob Taylor Reuters / November 25, 2007

Rudd, 50, the leader of the Labor Party and a former diplomat, presented himself as a new leader who would change some of the policies that had made Howard a solid ally of the Bush administration.

Rudd promised to pull about 500 Australian combat troops out of Iraq and sign the Kyoto Protocol on climate change, further isolating Washington from world opinion on both issues.

"To our friends and allies around the world, I look forward as the next prime minister of Australia to working with them in dealing with the great challenges which our world now faces," he told cheering supporters at a victory party late yesterday.

The surge to the Labor Party left Howard battling to win his own parliamentary seat, which he has held since 1974, putting him in danger of becoming the first prime minister since 1929 to lose his constituency.

"King Kevin the new conqueror," said the Sun-Herald in Howard's hometown of Sydney in today's editions. "It's Labor in a Ruddslide," said the Australian national newspaper.

At least four and possibly six government ministers, including Howard, looked likely to be ejected after a swing of more than 6 percent across the nation, bringing only the sixth change of government since World War II.

The Labor Party had more than 53 percent of the vote, compared with 47 percent for Howard's coalition, according to the Australian Electoral Commission.

Election analyst Antony Green predicted that Labor would win up to 86 seats in the 150-seat Parliament, giving it a majority for the first time since it lost power to Howard's conservatives in 1996.

Rudd, who speaks Chinese and served as a diplomat in Beijing, is expected to forge closer ties with China and other Asian nations. He has said he wants a more independent voice in foreign policy, with past Labor governments more supportive of an energetic United Nations and global organizations.

Rudd promised to sign the Kyoto agreement immediately and lead his country to next month's UN climate summit in Bali, expected to kick-start talks on a post-Kyoto deal to slash greenhouse gas emissions globally.

But Labor could be frustrated by a hostile Senate, where the conservatives will have sway until July, possibly frustrating Rudd's Kyoto plan and promise to dump unpopular government labor laws that propelled his victory.

Center-left Labor will have to negotiate with diverse minor Senate parties including the left-leaning Australian Greens and the conservative Family First party.

Rudd was born in Nambour, Queensland, and attended Australian National University in Canberra. He has held diplomatic posts in Stockholm and Beijing, and was elected to the parliament in 1988.

In a message of unity, Rudd promised yesterday to govern for all Australians, including migrants and the poor.

"Today the Australian people have decided that we as a nation will move forward," Rudd told about 1,000 supporters at a football stadium in the tropical northern city of Brisbane. He was joined by his wife, Therese, and relatives.

The election was fought mainly on domestic issues, with Labor cashing in on anger at labor laws and rising interest rates that put homeowners under financial pressure at a time when Australia's economy is booming.

"Like Howard, he will quickly attempt to secure his administration with the fortress of institutional and cultural change. In short, Australia will shift to the left," said the Bulletin news magazine.

"Rudd will have to open negotiations soon with the United States about the withdrawal of Australia's combat troops from Iraq. This is a delicate operation because it will be Labor's first testing of the alliance," veteran political commentator Michelle Grattan wrote in the Sun-Herald.

Howard, 68, who had won four consecutive elections and held power for 11 years under the Liberal-led coalition. He conceded the election in front of a crowd of supporters in Sydney late yesterday, saying he took full personal responsibility for the defeat.

"This is a great democracy and I want to wish Mr. Rudd well," Howard said. "We bequeath to him a nation that is stronger and prouder and more prosperous than it was 11 1/2 years ago."

"The United States and Australia have long been strong partners and allies and the president looks forward to working with this new government," a White House spokeswoman said.

The result puts Labor in power nationally and in all of Australia's six states and two territories, with the lord mayor of the northern city of Brisbane now the senior ranking elected official in Howard's party.