Afghans kill 12 in protest over Koran-burning 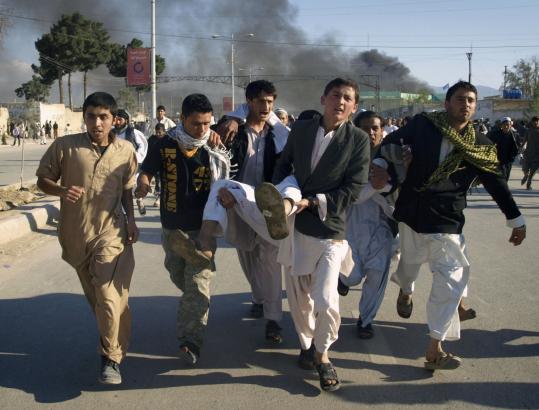 MAZAR-e-SHARIF, Afghanistan — Stirred up by three angry mullahs who urged them to avenge the burning of a Koran at a Florida church, thousands of protesters overran the compound of the United Nations in this northern Afghan city yesterday, killing at least 12 people, Afghan and UN officials said.

The dead included at least seven UN workers — four Nepalese guards and three Europeans from Romania, Sweden, and Norway — according to UN officials in New York. One was a woman. Early reports, later denied by Afghan officials, said that at least two of the dead had been beheaded. Five Afghans were also killed.

The attack was the deadliest for the United Nations in Afghanistan since 11 people were killed in 2009, when Taliban suicide bombers invaded a guest house in Kabul. It also underscored the latent hostility toward the nine-year foreign presence here, even in a city long considered to be among the safest in Afghanistan — so safe that US troops no longer patrol here in any numbers.

Unable to find Americans on whom to vent their anger, the mob turned instead on the next-best symbol of Western intrusion — the nearby UN headquarters.

“Some of our colleagues were just hunted down,’’ said a spokesman for the UN Assistance Mission in Afghanistan, Kieran Dwyer, in confirming the attack.

In Washington, President Obama issued a statement condemning the violence against UN workers.

“Their work is essential to building a stronger Afghanistan for the benefit of all its citizens,’’ he said. “We stress the importance of calm and urge all parties to reject violence.’’

The statement made no reference to the Florida church or the burning of the Koran.

Afghanistan has long been one of the most reactive flashpoints to perceived insults against Islam.

When a Danish cartoonist lampooned the Prophet Mohammed, four people were killed in riots in Afghanistan within days in 2006. The year before, a one-paragraph item in Newsweek alleging that guards at Guantanamo Bay, Cuba, had flushed a Koran down the toilet set off three days of riots that left 14 people dead in Afghanistan.

Yesterday’s episode began when three mullahs, addressing worshipers at Friday prayer inside the Blue Mosque here, one of Afghanistan’s holiest places, urged people to take to the streets to agitate for the arrest of Terry Jones, the Florida pastor who oversaw the burning of a Koran on March 20.

Otherwise, said the most prominent of them, Mullah Mohammed Shah Adeli, Afghanistan should cut off relations with the United States.

“Burning the Koran is an insult to Islam, and those who committed it should be punished,’’ he said.

Jones caused an international uproar by threatening to burn the Koran last year on the anniversary of the terror attacks of Sept. 11, 2001.

Among others, the overall commander of forces in Afghanistan, General David H. Petraeus, had warned at that time that such an action could provoke violence in Afghanistan and could endanger US troops. Jones subsequently promised not to burn a Koran, but he nonetheless presided over a mock trial and then the burning of the Koran at his small church in Gainesville, Fla., on March 20, with 30 worshipers attending.

The act drew little response worldwide but provoked condemnation in this region, where it was reported in the local media and where anti-American sentiment runs high.

Last week, President Asif Ali Zardari of Pakistan condemned the burning in an address before Parliament, and President Hamid Karzai of Afghanistan on Thursday called on the United States to bring those responsible for the Koran burning to justice.

A prominent Afghan cleric, Mullah Qyamudin Kashaf, the acting head of the influential Ulema Council of Afghanistan and a Karzai appointee, also called for US authorities to arrest and try Jones in the Koran burning.

“We expressed our deep concerns about this act, and we were expecting the violence that we are witnessing now,’’ he said. “Unless they try him and give him the highest possible punishment, we will witness violence and protests not only in Afghanistan but in the entire world.’’