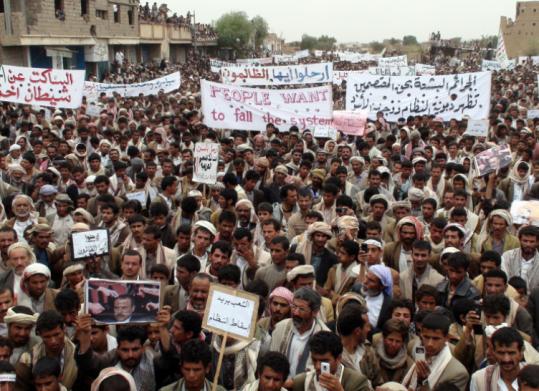 SANA, Yemen — Yemen’s president has fired a government minister for failing to persuade an expanding protest movement to end its monthlong challenge to his 32-year rule over one of the most impoverished and volatile corners of the Arab world.

With no sign that his opponents will accept anything less than his ouster, President Ali Abdullah Saleh has filled the streets with armed supporters in an increasingly violent crackdown. The opposition gained its own support yesterday from striking workers as well as university professors and a growing number of powerful tribal chiefs turning against Saleh.

Even before the protests, which were inspired by the toppling of Arab autocrats in Tunisia and Egypt, Saleh’s government barely had control beyond Yemen’s capital and faced threats from rebels in the north and a secessionist movement in the once-independent south.

In a sign of his frustration, Saleh on Sunday fired the government minister in charge of trying to engage his opponents in dialogue, Hamoud al-Hattar, and replaced him with another Cabinet minister.

The protesters, angry about corruption, poverty, and a lack of political freedom, have demanded that Saleh step down and have rejected his offers to form a national unity government. Saleh has failed to appease the protesters with a pledge not to seek another term in office in 2013.

Yesterday, police and plainclothes security officers remained locked in a standoff with protesters camped out in a square near Sana University. Hundreds more protesters were planning to reinforce them.

In a separate development, armed Yemeni security forces raided an apartment shared by four Western journalist and deported them because of their coverage of a uprising against the country’s longtime ruler.

The journalists, two Americans and two Britons in their 20s, contribute to publications that include the Wall Street Journal, Time Magazine, the Los Angeles Times and the Washington Post.

“They came into our apartment this morning and they told us all to come to the immigration office,’’ said Oliver Holmes, 24, a Briton.

Yemen has largely stopped issuing journalist visas as it tries to control coverage of the protests, but Holmes said he and his roommates had the appropriate accreditation. The other journalists who were deported are Americans Haley Sweetland Edwards and Joshua Maricich, and British citizen Portia Walker.

China
China’s prime minister on yesterday rejected any comparison between his country and the Middle East and North African nations where popular uprisings toppled long-serving autocrats.

In a news conference at the close of the annual legislative session, Wen Jiabao also said the country would tackle rising prices, but was wrestling with finding the right mix between creating jobs and fighting inflation.

Handling politically volatile price rises is crucial to maintaining stability in China, where millions spend half their salary or more on food and a yawning gap between rich and poor underscores endemic corruption.

Burkina Faso
Burkina Faso’s government said yesterday that it was closing public universities after weeks of violent protests over the death of a student.

Last week the government closed public schools to curb the demonstrations. In a statement yesterday, it said it was suspending social services allocated to students. It did not say when institutions would reopen.

Two police officers were charged Saturday with beating Justin Zongo, whose death in police custody sparked deadly protests that began last month and have left at least six dead. The government said the student had meningitis, but students say police mistreatment led to his death. They are demanding the government fire top ministers.