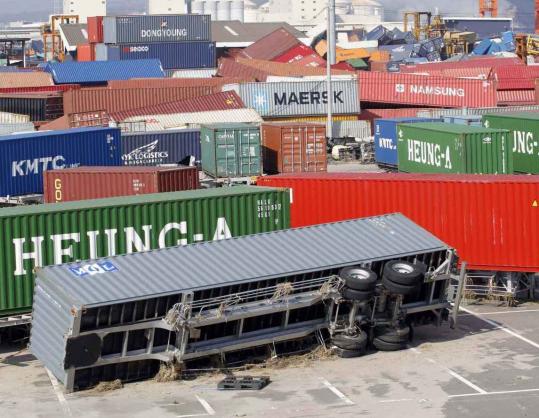 WASHINGTON — Japanese stock markets fell more than 5 percent today as the country’s manufacturers shuttered plants to assess damage and deal with power shortages, and the nation’s economy wrestled with the impact of not only a natural disaster but lingering concerns about nuclear safety.

The Nikkei index of major Tokyo Stock Exchange companies fell sharply as trading opened for the first full day since the earthquake and tsunami struck on Friday. The impact around the world will be watched closely for signs of how a new round of economic uncertainty is received by markets balancing a US economic recovery with rising oil prices and other emerging risks.

The world’s third-largest economy was hobbled by a crisis that will challenge its financial system and energy infrastructure, as well as its capacity for dealing with a humanitarian disaster.

The first working day since the quake dawned to rolling blackouts and hoarding, despite the central Bank of Japan’s vow to keep the economy on track.

The bank announced it was injecting a record $183.8 billion into money markets in an attempt to keep the country’s financial system stable and its trading system functioning.

The insured property losses from the quake could amount to between $14 billion and $35 billion, according to Air Worldwide, a risk consulting company.

Japan was already groaning under government debt equal to twice its yearly economic output, proportionally the world’s largest load, but analysts said the country should have the financial muscle to deal with the reconstruction.

“Japan has the immediate fiscal space to respond to this tragedy,’’ said Mohamed El-Erian, chief executive of the investment fund Pimco.

Although the cost of reconstruction may prove challenging, analysts said Japan retains enough room to borrow what it will need to bounce back from the devastation without, for example, using nontraditional methods such as spending down its trillion-dollar stockpile of international currency reserves.

Money is likely to also flow from Japanese investments overseas back to the country, a phenomenon that may have been behind the jump in the value of the yen Friday, following the disaster.

The Tokyo exchange was open only half an hour longer after the earthquake struck, but in those closing minutes dropped 1.7 percent.

Analysts expected further declines today, and the weekend’s events are likely to shape trading worldwide amid expectations that problems at the country’s nuclear facilities may prompt countries to rethink the use of nuclear power and boost demand — and prices — for oil and other fuels.

But the effect on industry and economic activity won’t be clear until it is known how long the plants will be off line, how the lost power can be replaced, and whether potential radiation leaks at the nuclear facilities have been contained.

Japanese companies are just beginning to assess the damage. The twin natural disasters spared some of the country’s most important economic zones, but have forced at least a temporary shutdown of plants and businesses in the more heavily industrialized Tohoku region.

But the global impact could be unpredictable in an era when markets, investors, and policy makers have become increasingly concerned about the way shocks in one country can ripple through the world in unexpected ways.

In its most recent analysis of Japan, the IMF said it was concerned any disruption to Japan’s tentative return to economic growth could send the country into a deflationary spiral, with wages, prices, and investment falling, and households and businesses reluctant to spend. Although Japan’s economy, with its aging population and stagnant incomes, is not a driving source of world demand for goods and services, it does play an important role in world trade, and a renewed recession there could deal a broader blow to confidence in the recovery.