US and South Korea reject talks with North

Military exercises continue off coast in show of force 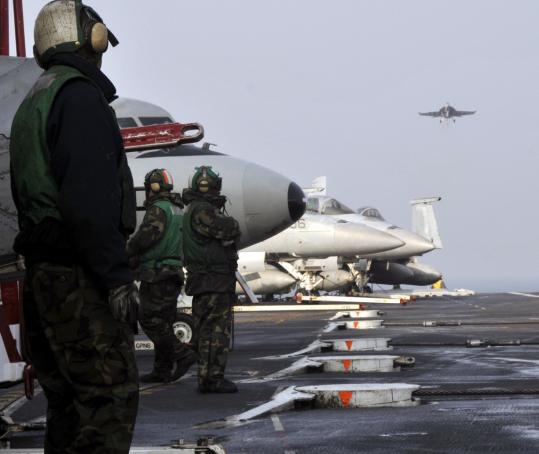 A Super Hornet jet fighter lined up for a landing on the aircraft carrier USS George Washington yesterday during a joint exercise with South Korea in the waters south of Yeonpyeong Island. (Petty Officer 3d Classs David A. Cox/ US Navy via Associated Press)
By Helene Cooper New York Times / November 30, 2010

WASHINGTON — The United States, South Korea, and Japan are all balking at China’s request for emergency talks with North Korea over the crisis on the Korean Peninsula, as high-profile military exercises between South Korea and the United States in the Yellow Sea continued in a show of force.

Obama administration officials said that a return to the table with North Korea, as China sought this weekend, would be rewarding Pyongyang for provocative behavior over the past week, including the North’s deadly artillery attack on a South Korean island and its disclosure of a uranium enrichment plant.

Separately, South Korea’s military appeared to step back from one confrontational stance, canceling live-fire artillery drills on the island in the Yellow Sea attacked by North Korea a week ago. The drills were scheduled for today but canceled within four hours of the announcement.

Beijing had called for emergency talks with North Korea, the United States, Japan, South Korea, and Russia, participants in the six-party nuclear talks, which have been suspended indefinitely.

“The United States and a host of others, I don’t think, are not interested in stabilizing the region through a series of PR activities,’’ said Robert Gibbs, the White House spokesman.

He said that the talks “without an understanding and agreement from the North Koreans to both end their behavior as they exhibited last week, but also to come to the table with a seriousness of purpose on the denuclearization issue — without that seriousness of purpose, they’re just a PR activity.’’

Rejecting the emergency talks amounts to a pointed rebuke to China. The United States wanted China to signal clearly that North Korea’s aggressive behavior would not be tolerated. Instead, Beijing remained neutral about who was responsible for the recent flare-up and offered only to provide a venue for all sides to air their differences.

Yet turning down China’s offer may also reveal the limited options available to the Obama administration and the South Korean leadership. Aside from a show of military solidarity, the two countries have based their response largely on hopes that China, as North Korea’s main economic and diplomatic supporter, might punish the reclusive government for its series of provocations.

Gibbs and other administration officials said that the United States also wanted to see North Korea take steps to denuclearize, although most Asia analysts said that might be a tall order for Pyongyang at a time when its government is undergoing a leadership crisis.

Both President Lee Myung-bak of South Korea and Prime Minister Naoto Kan of Japan strongly suggested yesterday that they, too, were not prepared to engage in consultations as suggested by the Chinese.

Both denounced in public remarks what they called North Korea’s brutality; Lee pointedly said nothing about the Chinese proposal. Analysts in Asia inferred that to be an implicit rejection.

It remains unclear just what the United States would accept from North Korea to return to talks. One Obama administration official said Washington wanted a clear sign that the North “will stop provocative behavior.’’

While the military exercises are continuing, the prospect of the South Korean live-fire drills today had been sharpening tensions on a peninsula on tenterhooks after the North’s artillery attack last week on a garrison island that is also home to about 1,350 civilians, mainly fishermen. The attack killed two South Korean marines and two civilians, and wounded 16 people.

North Korea blamed the South for provoking the attack by firing at it from the island, Yeonpyeong, which lies in waters disputed by the two sides. The South, which returned fire, insisted it had been firing only test shots and that none were in territory it recognized as the North’s.

The United States announced the date of the joint exercises as an immediate response. China — which the United States, South Korea, and other countries hoped would act to calm the North — has so far focused more publicly on warning the United States not to operate in waters Beijing claims as a sovereign zone.

At the United Nations, the Obama administration called for tighter enforcement of sanctions against North Korea. The Security Council met to discuss the crisis but did not emerge with any new plans, further reflecting the mounting frustration in the international community over how to rein in North Korea.