US may increase its drone attacks near Afghan border 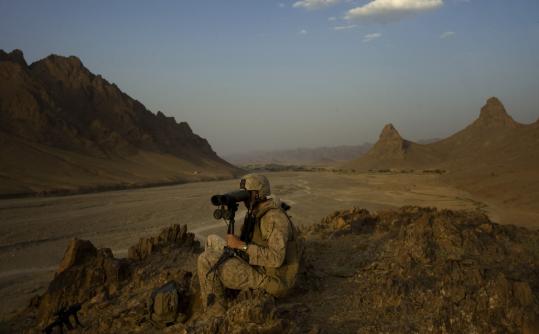 WASHINGTON - The White House is considering expanding counterterrorism operations in Pakistan to refocus on eliminating Al Qaeda instead of mounting a major military escalation in Afghanistan.

Two senior administration officials said yesterday that the renewed fight against the terrorist organization could lead to more missile attacks on Pakistan terrorist havens by unmanned US spy planes. The officials spoke on condition of anonymity because no decisions have been made.

Top aides to President Obama said he still has questions and wants more time to decide.

The officials said the administration would push ahead with the ground mission in Afghanistan for the near future, still leaving the door open for sending more US troops. But Obama’s top advisers, including Vice President Joe Biden, have indicated they are reluctant to send many more troops - if any at all - in the immediate future.

Police officials from some of Afghanistan’s most violent regions questioned the need for more US troops yesterday, saying it would increase the perception they are an occupying power and that the money was better spent on local forces.

General Stanley McChrystal, the top US and NATO commander in Afghanistan, has warned the war is getting worse and could be lost without more troops. Obama approved sending 21,000 more troops to Afghanistan this year, bringing the total number of US forces there to 68,000 by the end of 2009.

“It is very hard for local people to accept any foreigners who come to our country and say they are fighting for our freedom,’’ said General Azizudin Wardak, the police chief in Paktia Province. Mohammad Pashtun, the chief of criminal investigation unit of southern Kandahar Province, the Taliban’s heartland, said that the money would be better off going to Afghan forces.

In weekend interviews, Obama emphasized that disrupting Al Qaeda is his main goal and worried aloud about “mission creep’’ that moved away from that direction. “If it starts drifting away from that goal, then we may have a problem,’’ he said.

The proposed shift would bolster US action on Obama’s long-stated goal of dismantling terrorist havens, but it could also complicate American relations with Pakistan, long wary of the growing use of aerial drones to target militants along the porous border with Afghanistan.

The prospect of a White House alternative to a deepening involvement in the stalemated war in Afghanistan comes as administration officials debate whether to send more troops.

The two senior administration officials said yesterday that one option would be to step up the use of missile-armed unmanned spy drones over Pakistan that have killed scores of militants over the last year.

The armed drones could contain Al Qaeda in a smaller, if more remote, area, and keep its leaders from retreating back into Afghanistan, one of the officials said.

Most US military officials have preferred a classic counterinsurgency mission to keep Al Qaeda out of Afghanistan by defeating the Taliban and securing the local population.

However, one senior White House official said it’s not clear that the Taliban would welcome Al Qaeda back into Afghanistan. The official noted that it was only after the Sept. 11, 2001, attacks that the United States invaded Afghanistan and deposed the Taliban in pursuit of Al Qaeda.

Pakistan will not allow the United States to deploy a large-scale military troop buildup on its soil. However, its military and intelligence services are believed to have assisted the United States with airstrikes, even while the government has publicly condemned them.

The Pakistan Embassy in Washington did not immediately return calls seeking comment.

Wider use of missile strikes and less reliance on ground troops would mark Obama’s second shift in strategy and tactics since taking office.

Such a move would amount to an admission that using a traditional military strategy to take on the Taliban with thousands more troops is doomed to failure. But stepping up attacks on the remnants of Al Qaeda also would dovetail with Obama’s presidential campaign promise of directly going after the terrorist network that spawned the Sept. 11 attacks on New York and Washington.