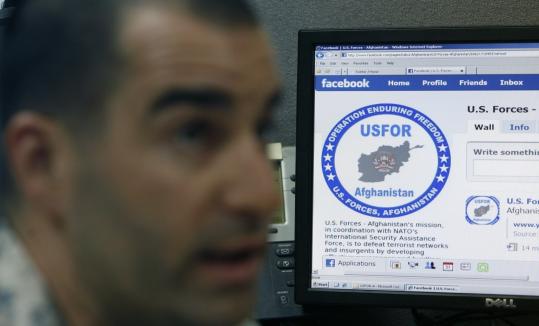 KABUL - US and Afghan forces killed four militants in Wardak Province, the US military tweeted on Monday.

That's right. The military "tweeted" the news, sending it worldwide on Twitter, the social networking site, hours before making the formal announcement to the media.

The US military is putting Twitter, along with Facebook and YouTube, into its arsenal of weapons for getting out its side of the Afghan story, reaching the online generation and countering the Taliban's own fast-growing website and text-messaging skills.

"Afghan & coalition forces killed four militants & detained two suspects in a Wardak Province operation targeting an IED-network commander," said a military tweet Monday, coming in just under the 140-character limit for such messages. IED is shorthand for a roadside bomb.

Care to participate? Sign up with http://twitter.com and then go to http://www.twitter.com/usfora.

On the military's Facebook page, http://tinyurl.com/nz3xam, launched on a test basis in April, members of the public can talk to US spokespeople, while its YouTube postings on www.youtube.com/usfora will feature original material such as video news stories.

"There's an entire audience segment that seeks its news from alternative means outside traditional news sources, and we want to make sure we're engaging them as well," said Colonel Greg Julian, the top US military spokesman in Afghanistan.

But the limitations of military tweeting were quickly laid bare when it was announced Monday that four US troops were killed in two separate roadside bombings. Those troops were under NATO command, which would have to approve an announcement on the US military's Twitter page.

Besides tweeting, the brass are also encouraging troops to post stories and photos on websites to portray daily life in Afghanistan and highlight development projects that may not have made the news. Julian described it as "an unfiltered opportunity" for public interaction with troops.

Many military commands and individual troops already use social networking sites. But the effort in Afghanistan is the first to harness the power of such sites for spreading information from an active war zone.

Not all the Facebook posts have been promilitary, and officials say no criticisms will be suppressed provided postings are free of hate speech or sexual or otherwise offensive material.

A team based in Kabul will update and maintain the sites and watch for false postings that evade the password protections. US troops already scour websites, respond to questions from individuals, and rebut what the military considers to be false information.

The military has recruited professional journalists for their effort, including Matthew Millham, 31, of New Paltz, N.Y., a former reporter for the military newspaper Stars and Stripes. Now an Army staff sergeant, he reads blogs several hours a day and responds to posts.

"When you're able to connect with the people directly, out of the mainstream, it can be powerful," Groves said. Asked if this was a way of bypassing mainstream media, he said: "I don't think we're bypassing anything. This is just another avenue to reach another audience."

US officials here have long fretted that the military is losing the information war to the Taliban, who they say routinely inflate their own successes and American failures on websites and in chat rooms frequented by Taliban sympathizers.

Much of the new plan was hatched by Navy Lieutenant Adam Clampitt, a 34-year-old reservist from Washington, D.C. He pointed out that 74 percent of Americans ages 18 to 35 use Facebook.

Though the Facebook site is still in the testing phase, it already has attracted several thousand members, including parents of troops.

"As a mom it brings me comfort to know what is going on," Jill Busch wrote in an e-mail message to The Associated Press. "Certainly all we hear in the news is negative stuff. My son has wanted to serve our country since he was 10 years old. I am very proud of him."