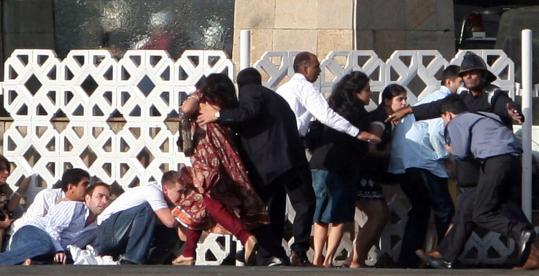 MUMBAI, India - Western visitors and Mumbai residents ducked under tables at luxury five-star hotels as staff members locked restaurant doors at the first rattle of gunfire and explosions in the lobby below.

Not far away, army commandos in battle-ready camouflage battled attackers in black shirts and jeans carrying shoulder bags filled with ammunition at Mumbai's main railway station, which was filled with commuters waiting to catch trains home.

Twelve hours after the first shots were fired at about 10 p.m. at a busy Mumbai cafe, the terror attacks continued yesterday inside two of the city's best-known and most opulent hotels, where terrorists still held hostages.

"We were at dinner when we heard shots fired. There was gunfire and explosions. We stayed on the floor, many were lying under tables, under furniture, and the hotel staff told us to be quiet," said Cheryl Robinson, a British tourist who was trapped inside Mumbai's Taj Mahal Palace and Tower hotel with two friends. "The hotel staff were stupendous. They locked the doors and warned us to sit tight."

She said restaurants and rooms were flooded with water after a pipe burst in the chaos of the gunshots and blasts. "We lay down in the water. We could hear the sound of people running outside. It was terrifying."

Seven long hours later, a barefoot Robinson shivered as she stood outside the burning but still majestic stone-columned hotel, which belched out black smoke from shattered windows. Soldiers and firefighters helped her and several others climb down ladders and escape the blazing edifice as the firing continued inside.

A clutch of weeping tourists from Spain, Italy, and Britain, also barefoot, huddled together holding bottles of water and haversacks. They waved away journalists eager for news.

At another Mumbai landmark, the Chhatrapati Shivaji railway station, Nasim Inam's hands shook as he spoke of seeing commuters mowed down while walking to catch the late trains home.

Four young men carrying big guns and wearing black T-shirts and blue jeans rushed in, Inam said. "They just fired randomly at people and then ran away. In seconds, people fell to the ground."

Sobbing and shaking his head, he said the attackers were 25 years old at the most.

Just a few miles away, witnesses said gunmen hijacked a police van and then opened fire on crowds that had collected near two hospitals close to police headquarters.

"We felt the ground shake and heard the explosions," Manish Tripathi said at a police cordon near one of the hospitals. "We heard a car speed up behind us. It was a police van, but the men inside were firing at us."

He said that in seconds people around him were shot at. "Men were screaming that they had lost their fingers. There was blood all over," said Tripathi, who escaped unhurt. "Some were shot in the leg, some on the shoulder or hand."