Party again made its choice with no input from voters 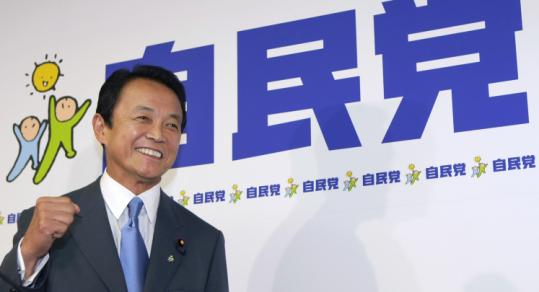 When his selection by the ruling Liberal Democratic Party is formalized tomorrow in Parliament, Aso, 68, a blue-blooded party stalwart whose grandfather was a prime minister, will be the third Japanese leader in two years chosen by party members without input from the country's voters.

"Who else but our party can achieve policies in order to address the public's concerns?" Aso said after easily winning a party vote that had been viewed as a sure thing from the moment Prime Minister Yasuo Fukuda abruptly announced on Sept. 1 that he would quit.

As prime minister, Aso will not have to call an election until the fall of next year.

But Japan's economy is on the brink of recession, parliament is deadlocked and there is widespread public dissatisfaction with the ruling party. As a result, Aso might quickly dissolve parliament and schedule a nationwide election before his personal popularity dissipates. Recent polls show his approval ratings are slightly above 40 percent.

There has been widespread speculation that an election could be called as early as next month, although Aso said last week that would be too soon, given turmoil in world financial markets.

In recent speeches, Aso has advocated the LDP's traditional cure-alls for what ails Japan - tax cuts and increased public spending, especially on projects in rural areas that are the party's historical base.

He warned about the dangers of secretive Chinese military spending, but he also reassured China that he would "not view with hostility" that country's economic development. China is Japan's major trading partner.

When an election does come, Aso will face off against Ichiro Ozawa, 66, the newly reelected leader of the Democratic Party of Japan, which now controls the upper house of parliament.

Since Ozawa's party won control of that chamber 14 months ago, it has all but paralyzed parliament, embarrassed the ruling LDP at every opportunity and plotted to take over the powerful lower house of parliament, which picks the prime minister.

Polls suggest that the Democratic Party has a legitimate shot at winning control of the lower house. The election is shaping up as one of the most competitive in decades. The LDP has dominated political life in Japan, making it a virtual one-party state.

Aso is certain to cut a more vivid, fun-loving figure in Japanese political life than his predecessor, the colorless Fukuda, whose approval ratings sometimes sagged below 20 percent.

Aso comes from a rich and prominent family. His younger sister is married to a cousin of the Japanese emperor. He favors finely tailored suits and is a former Olympian who competed in clay pigeon shooting in Montreal in 1976. The Japanese press said he used to travel to shooting practice in his .

A skilled speaker, he researches his audiences and often captivates their attention - a skill lacking in the past two prime ministers. He is also Roman Catholic, a religion whose followers make up less than half a percent of Japan's population.

Most notably for an aging politician, Aso is a devoted reader and advocate of manga, the Japanese comic books and graphic novels that have annual sales in the billions of dollars. As foreign minister, Aso helped establish a national manga award for young artists and spoke of "manga diplomacy" as a way of connecting Japan to the world.

Aso is also an outspoken nationalist, with a periodic habit of angering Asian neighbors with long memories of the Japanese military's brutal behavior before and during World War II.