Kabul gets 3 hours of electricity a day

Conditions persist despite millions in US, global aid 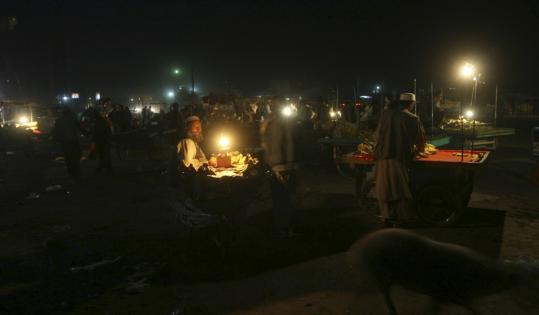 Vendors at a bazaar in Kabul in September. More than five years after the fall of the Taliban, dinner by candlelight remains common in the Afghan capital. (Rafiq Maqbool/Associated Press)
Email|Print| Text size – + By Jason Straziuso Associated Press / January 27, 2008

KABUL, Afghanistan - Gul Hussein was standing under a pale street lamp in a poor section of east Kabul when the entire neighborhood suddenly went black.

"As you can see, it is dark everywhere," the 62-year-old man said, adding that his family would light a costly kerosene lamp for dinner that evening. "Some of our neighbors are using candles, but candles are expensive, too."

More than five years after the fall of the Taliban - and despite hundreds of millions of dollars in international aid - dinner by candlelight remains common in the Afghan capital of Kabul. Nationwide, only 6 percent of Afghans have electricity, the Asian Development Bank says.

The electricity shortage underscores the slow progress in rebuilding the war-torn country. It also feeds other problems. Old factories sit idle and new ones are not built. Produce withers without refrigeration. Dark, cold homes foster resentment against the government.

In Kabul, power dwindles after the region's hydroelectric dams dry up by midsummer. This past fall, residents averaged three hours of municipal electricity a day, typically from 7 p.m. to 10 p.m., according to USAID, the American government aid agency. Some neighborhoods got none.

"That's a scary sounding figure because it's pretty tiny," said Robin Phillips, the USAID director in Afghanistan. "So we're talking about the relatively poorer people in Kabul who have no access to electricity at this time of year."

Electricity was meager under the Taliban, too, when Kabul residents had perhaps two hours of it a day in fall and winter. The supply has since increased, but not as fast as Kabul's population - from fewer than 1 million people in the late 1990s to more than 4 million today.

Meanwhile, souring US relations with Uzbekistan have delayed plans to import electricity from that country. Power is not expected to arrive in a significant way until late 2008 or mid-2009.

"Life takes power," said Jan Agha, a 60-year-old handyman from west Kabul who recalled how the city had plentiful power during the 1980s Soviet occupation. "If you have electricity life is good, but if there's no electricity you go around like a blind man."

Some in Kabul do have electricity: the rich, powerful, and well connected.

Municipal workers - under direction from the Ministry of Water and Energy - funnel what power there is to politicians, warlords, and foreign embassies. Special lines run from substations to their homes, circumventing the power grid. International businesses pay local switch operators bribes of $200 to $1,000 a month for near-constant power, an electrical worker said anonymously for fear of losing his job.

If high-ranking government officials visit the substations, workers race to cut off the illegal connections. Large diesel generators, which businesses and wealthy homeowners own as a backup, rumble to life.

Ismail Khan, the country's water and energy minister, dismisses allegations of corruption as a "small problem."

"The important thing to talk about is that in six months, all of these power problems will be solved and everyone will have electricity 24 hours a day," he said, an optimistic prediction that relies on heavy rains next spring and quick work on the Uzbekistan line.

Colorful maps on the walls of Khan's office show existing and future power lines. There is a wall-mounted air conditioner, a luxury in Afghanistan.

India, the Asian Development Bank, and the World Bank have spent hundreds of millions of dollars on new power lines, including transmission towers installed this summer at 15,000 feet over the Hindu Kush mountains, to import electricity from Uzbekistan.

Though the line from Kabul to the Uzbek border is in place, a 25-mile section in Uzbekistan has not yet been built. And the US has little leverage to speed it up, said Rakesh Sood, the Indian ambassador in Kabul.

Initially, Uzbekistan supported the US-led war in Afghanistan, opening an air base to US planes. But the Uzbek government no longer views America as a friend, ever since US leaders loudly criticized the country's human rights record when government-backed forces massacred peaceful demonstrators in 2005.

Even when the Uzbek line is completed, Afghanistan can no longer expect the 300 megawatts originally envisioned, Sood said. That would have been more than the 190 megawatts Kabul has today and a significant boost to the 770 megawatts Afghanistan has nationwide.

President Hamid Karzai, during a radio address to the nation last fall, said he discussed with President Bush the country's need to produce its own electricity.

But some efforts have run afoul of the continuing Taliban insurgency.