THIS STORY HAS BEEN FORMATTED FOR EASY PRINTING
VISITING OFFICIALS

US lawmakers were to meet with Bhutto; cut trip short 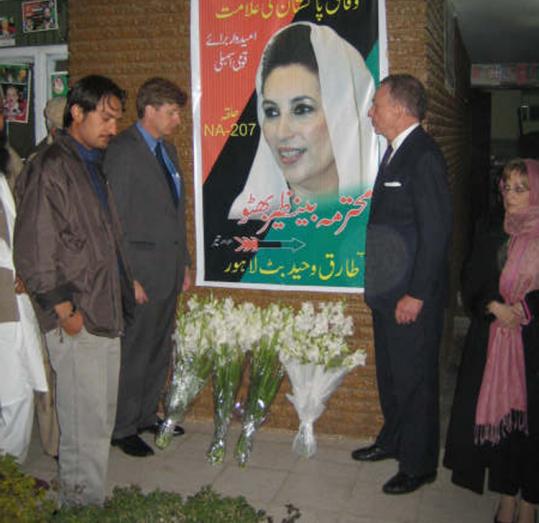 Representative Patrick Kennedy, Democrat of Rhode Island, and Senator Arlen Specter, Republican of Pennsylvania, were staying at an Islamabad hotel and were scheduled to dine with Musharraf and meet later in the night with Bhutto.

Kennedy said he was just leaving his hotel room for the dinner when someone advised him to check the news on television.

"I couldn't believe it," Kennedy said in a telephone interview from Pakistan. "You could really feel the tragedy of this loss because Bhutto really represented hope here for so many people."

"Her death really dashed the hope of many here in Pakistan and that's why there's so much disillusionment and anger being vented through these protests that are lighting up the sky tonight as people set fires all over the countryside," Kennedy said.

Specter said he heard about the attack on Bhutto as he was dressing for the dinner with Musharraf.

"Our foreign policy had relied on her presence as a stabilizing force," Specter said, emotionally describing her death as "a real, real, real shock."

"I knew her personally. . . . She was, as you know, glamorous, beautiful, smart," he said. "Her loss is a setback. But you have to face what is. And now, without her, we have to regroup."

After learning she was dead, Specter, Kennedy, and Anne Patterson, the US ambassador to Pakistan, laid flowers under Bhutto's photograph at her campaign headquarters in what they described as an unsettling atmosphere.

"They were crying and they were sobbing," Specter said, describing the people there. "It's a night reminiscent of . . . Robert Kennedy's assassination."

Patrick Kennedy, son of Senator Edward Kennedy, Democrat of Massachusetts, and Robert Kennedy's nephew, said they laid the flowers at Bhutto's headquarters because it was unsafe to do so at her residence. Specter said he felt apprehensive about being out at night as an American.

The lawmakers said they were cutting their trip by a day on the advice of the State Department.

Both lawmakers said turmoil was engulfing the country.

"I've known Benazir Bhutto for the better part of two decades, having been visiting her in Karachi back in 1988, and when she was prime minister in 1995," he added. "And we were looking forward to talking to her to get to her evaluation on whether the elections would be honest and open, and to get her sense of the situation."