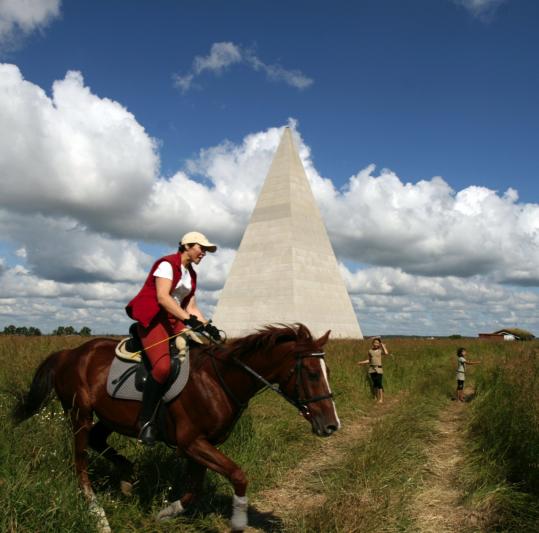 Rumors of the 12-story pyramid's mysterious, miraculous powers have spread through the suburbs and into the capital. The pyramid is made of 55 tons of fiberglass. (Photos by Sergei L. Loiko for the Los Angeles Times)
Email|Print|Single Page| Text size – + By Megan K. Stack Los Angeles Times / August 10, 2008

KOZENKI, Russia - You can see it from miles away, looming over the birch forests and wildflower fields and construction sites crammed with future dachas for Russia's rich and ruthless.

Stabbing toward heaven from its hilltop perch, the pyramid gleams white under the blast of northern sun. Twelve stories high and made of 55 tons of fiberglass, the pyramid swarms with Russians desperate to rearrange their energy fields and cure their karma.

Everybody, it seems, has heard some miracle tale about the pyramid: The sterile woman miraculously impregnated after a visit. The prisoners pacified with drafts of saltwater charged by the energies of the pyramid. The pillar of mysterious force allegedly emanating from the peak, healing the ozone layer over Russia.

"You can't expect to build a pyramid and see everything change overnight. It happens gradually," says Alexander Golod, a Ukrainian defense contractor who has spent millions of dollars building pyramids around the former Soviet Union and beyond.

"The possibility of any emergency decreases, including hurricanes and typhoons. It seriously changes physical and psychological conditions."

Golod sits in a yard of bright grass and vibrant poppy beds in a Moscow suburb. His wife chases their grandson through the fruit trees. Between the rooftops, the pyramid blocks the horizon - he and his family live well within reach of the pyramid's energy, he says.

Asked what drives his obsession with pyramids, Golod takes a long time to answer. He blinks his blue eyes. Finally, he says: "The pyramid changes the structure of space."

Olympic athletes visit the pyramid to boost their strength, he says, and Russian cosmonauts are so fond of the pyramid that they have taken keepsakes from within the structure into space. (An official at Russia's Gagarin Cosmonaut Training Center could not confirm this claim, but said he doubted its truth.)

Rumors of the pyramid's mysterious powers have spread through the suburbs and into the city. People come looking for peace of mind, strength, health, insight. Life is hard these days in Moscow. The city is a place of blank expressions and cold shoulders. Prices climb high and then higher still.

But the pyramid is quiet and cool, a sort of New Age monastery. There's no sign, no gate, and no admission tickets. Visitors park, wander inside, and stay as long as they like. Swallows wheel in circles up in the roof. Summer sun filters thinly though the fiberglass, casting an amber glow. Three massive globes, one each for geography, topography, and astronomy, swell in the center of the floor, surrounded by benches. On one sits a stooped woman, stretching her arms to the ceiling, scooping them through the air and pulling them down to her heart.

"Try it for yourself," she says. "Feel how you are drawing the energy to yourself."

Another woman, Lidiya Okhapkina, 70, brought visiting family members to the pyramid. She's heard it can cure sickness and pain. She only wants to be healthy.

Kseniya Simonova, arm laced around her boyfriend, has heard the stories, too. A crew team visited the pyramid, then rowed to first place, boosted by supernatural powers. "We've heard you get crazy energy from it," she says.

But that's not why Simonova and her boyfriend, recent college graduates, have driven all the way out to the pyramid. The truth is, they're looking for a good hangover cure.

"They say no pills can help you like the pyramid," she says.

Behind glass counters stacked with stuffed pandas, jewelry, and stone eggs, Olga Vorobyova keeps watch. Three years ago, when she took a job peddling crystals and water in the pyramid, she was sick and weighed down with troubles. But now, because of the "positive energy" of her work space, she has been cured.

"Bad things used to happen. My husband drank a lot and we had no money," she says. "Now I live alone and life is better. I feel healthier."