Palestinian state in 2008 is goal; US assumes monitoring role 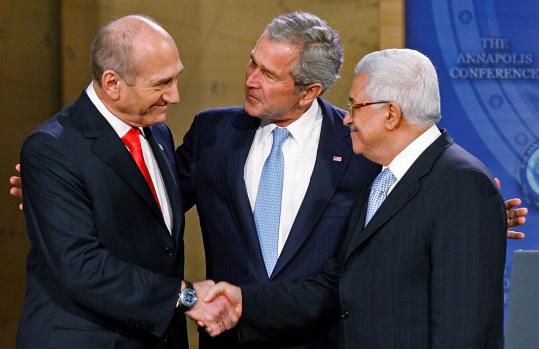 They made the announcement at the start of a Mideast peace conference at the US Naval Academy, hosted by President Bush and Secretary of State Condoleezza Rice and attended by delegates from more than 50 countries and global institutions.

US officials expressed hope the negotiations would lead to a historic breakthrough, though they were reluctant to make any predictions, warning that talks would be extremely difficult and that major concessions would be required of both parties.

Olmert, speaking in Hebrew during the announcement ceremony, said Israelis are "not indifferent" to the suffering of the Palestinian people and suggested that it was inevitable that Israel would give back much of the Palestinian land captured in 1967.

Abbas followed by addressing the Israeli people in Arabic, saying: "We stretch our hands to you as equal partners in peace . . . We should not lose this opportunity, which might not be available once again."

But beyond the strong emotional statements - and a warm, lingering handshake on stage - there were few hints of agreement on substance, even after months of informal, face-to-face talks between the two men.

The most significant new element appeared to be an agreement that the United States will take on the role of monitoring progress of the talks and ensuring that any agreements were honored, something the Bush administration has shied away from for fear of wasting energy on a conflict the parties were not ready to solve.

Olmert and Abbas were to meet again today at the White House to officially begin the talks. Each side also agreed to establish negotiating committees that will meet for the first time on Dec. 12, the same day international donor countries will meet in Paris to pledge funds to assist Abbas's government.

The Annapolis gathering, which included representatives from 16 members of the Arab League along with European and Asian countries, was a turning point, analysts and delegates said, because it represents the first time that the powerbrokers of the Muslim world have sat in the same room as Israelis officials to support a peace process between Israelis and Palestinians.

"One consequence of getting all of these international actors around the table is accountability," said Tamara Wittes, a Middle East scholar at the Brookings Institution, a Washington-based think tank. "They are saying, 'We're supporting you, but we are expecting something to come of this.' "

Analysts say the success of the negotiations will depend on the willingness of the United States to make the issue a priority in the coming months, and to come up with creative diplomatic solutions if the two sides hit an impasse. Key points of disagreement include the final borders of the Palestinian state, the status of Jerusalem, whether Palestinian refugees will have the right to homes that are now a part of Israel, and measures to guarantee Israel's security.

Bush opened yesterday's meeting by reading a joint statement by Abbas and Olmert and personally committing himself to supporting the peace talks during his final year in office. His own speech couched the need to solve the conflict in stark terms that reflected his worldview of a global, epic struggle between terrorists and moderates.

"The time is right, because the battle is underway for the future of the Middle East and we must not cede victory to the extremists," he said. "The extremists are seeking to impose a dark vision on the Palestinian people . . . If this vision prevails, the future of the region will be endless terror, endless war, and endless suffering."

But despite Bush's pledge to spend political capital on the issue, he caused some consternation among delegates when he mispronounced Abbas's first name and Olmert's last name and left the gathering minutes after the two leaders spoke, without attending the working lunch with the heads of state and foreign ministers who traveled to Annapolis.

"Bush appears to be stuck in a "Star Wars"-like narrative of good versus evil that is excessively divisive and goes down like a lead balloon in the region," said Daniel Levy, a former Israeli negotiator who is now with the New America Foundation, a liberal-leaning Washington think tank. Levy said Bush's worldview could become the "biggest obstacle" to brokering a solution to the conflict.

But US, Palestinian, and Israeli officials praised the president for investing a significant amount of time to ensure the success of new peace talks, including face-to-face meetings earlier in the week with some international delegates to the meeting.

In addition, US officials, including Rice and David Welch, assistant secretary of state for Near Eastern Affairs, spent months trying to help Olmert and Abbas reach agreement on a joint statement to begin the conference.

For example, Israelis had wanted a statement recognizing Israel as a Jewish state, a wording that Palestinians feared would look like a concession on the issue of Palestinian refugees returning to homes in Israel. In the end, they settled on a bare-bones statement that referred only to Israel and Palestine.

"The fact that a simple document took that long to be reached shows us the indispensable role for third parties," said Afif Safieh, the Palestine Liberation Organization's ambassador to Washington.

Despite the Bush administration's reluctance to play such a hands-on role, senior administration officials appeared ready to embrace new responsibilities yesterday, saying they were working on devising the best mechanism for monitoring progress during the peace talks.

"This is a pretty serious responsibility for the United States," a senior administration official told reporters. "We are confident that we can take this on. The United States is probably the only party that could do this."

US officials also said they were carefully studying measures to ensure Israel's security, and suggested that retired Marine Corps General James Jones may be asked to play a role in this task. If Jones took up such a post, he would follow in the footsteps of Anthony Zinni, a retired general who was appointed envoy to the Middle East in Bush's first term. Zinni expressed skepticism about the Annapolis meeting yesterday.

"I think this is a wild grab at a much-needed positive legacy" for Bush, Zinni wrote in an e-mail. "There is a chance, however, for something good to happen because all sides are desperate."

Still, simply getting the two sides to agree to formal negotiations is a significant step forward, analysts say. For years, both Israeli and US officials have shown little interest in such talks, saying that Palestinians had to prove that they could root out terrorism before Israel would negotiate on the terms of a Palestinian state.

The morning speeches by Bush, Olmert, and Abbas were followed by a rare session chaired by Rice and attended by Israel's foreign minister, in which Arab governments - including Syria and Lebanon - gave speeches about the possibility of beginning separate peace talks with Israel.

Syria's deputy foreign minister said his country was willing to "build normal relations" with Israel if the Israelis made peace with the Palestinians and returned all land captured in the 1967 war.

Saudi Arabia's foreign minister said the Israel-Palestinian talks must be followed by similar negotiations for Syria and Lebanon.

Analysts said the unprecedented involvement of Arab states was crucial to giving Israelis the hope that making peace with the Palestinians would lead to broader recognition from the Arab world.

But they also said the real test of Annapolis will be whether the talks improve the lives of Palestinians and Israelis or political unrest and rejection from hard-liners.

"Today at Annapolis we got nice words," Levy said. "The real test moves to the region. Will the negotiations make progress or be paralyzed?"