Upward revision tied to trends in Africa and West 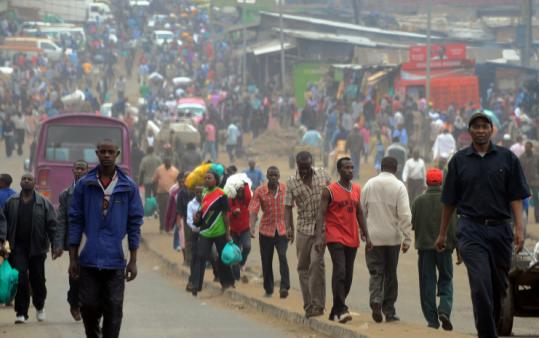 A scene in Nairobi last year. Growth in Africa remained so high that the population could more than triple in this century, according to the United Nations report. (Simon Maina/AFP/Getty Images/File 2010)
By Justin Gillis and Celia W. Dugger New York Times / May 4, 2011

NEW YORK — The world’s population, long expected to stabilize at just above 9 billion in the middle of the century, will instead keep growing and may hit 10.1 billion by the year 2100, the United Nations projected in a report released yesterday.

Growth in Africa remains so high that the population there could more than triple in this century, rising from today’s 1 billion to 3.6 billion, the report said — a sobering forecast for a continent already struggling to provide adequate food and water.

The new report comes just ahead of a demographic milestone, with the world population expected to pass 7 billion in late October, only a dozen years after it surpassed 6 billion. Demographers called the new projections a reminder that a problem that helped define global politics in the 20th century, the population explosion, is far from solved in the 21st.

“Every billion more people makes life more difficult for everybody — it’s as simple as that,’’ said John Bongaarts, a demographer at the Population Council, a research group in New York. “Is it the end of the world? No. Can we feed 10 billion people? Probably. But we obviously would be better off with a smaller population.’’

The projections were made by the UN population division, which has a track record of fairly accurate forecasts. In the new report, the division raised its forecast for the year 2050, estimating the world would probably have 9.3 billion people then, an increase of 156 million over the previous estimate for that year, published in 2008.

Among the factors behind the upward revisions is that the birth rate is not declining as rapidly as expected in some poor countries and has shown a slight uptick in some wealthier countries, including the United States, Denmark, and Britain. The United States is growing faster than many rich countries, largely because of high immigration and higher birth rates among Hispanic immigrants. The new report projects that the US population will rise from today’s 311 million to 478 million by 2100.

The director of the UN population division, Hania Zlotnik, said the world’s fastest-growing countries, and the wealthy Western nations that help to finance their development, face a choice about whether to renew their emphasis on programs that encourage family planning. Although they were a major focus of development policy in the 1970s and 1980s, such programs have stagnated in many countries.

Despite the lack of focus on population policy, it is clear that well-designed programs can bring down growth rates even in the poorest countries. Provided with information and voluntary access to birth-control methods, women have chosen to have fewer children in societies as diverse as Iran, Sri Lanka, Bangladesh, Mexico, and Thailand.

One message from the new report is that the AIDS epidemic, devastating as it has been, has not been the demographic disaster that was once predicted. Prevalence estimates and projections for the human immunodeficiency virus made for Africa in the 1990s turned out to be too high, and in many populations, treatment with new drug regimens has cut the death rate from the disease.

But the survival of millions of people with AIDS who would have died without treatment, and falling rates of infant and child mortality on the continent — both heartening trends — also mean that fertility rates for women need to fall faster to curb population growth, demographers said.

Other factors have slowed change in Africa, specialists said, including women’s lack of power in their relationships with men, traditions such as early marriage and polygamy, and a dearth of political leadership. While about three-quarters of married US women use a modern contraceptive during their child-bearing years, the comparable proportions are one-quarter of women in East Africa, 1 in 10 in West Africa, and a mere 7 percent in Central Africa, according to UN statistics.

“West and Central Africa are the two big regions of the world where the fertility transition is happening, but at a snail’s pace,’’ said John F. May, a World Bank demographer.