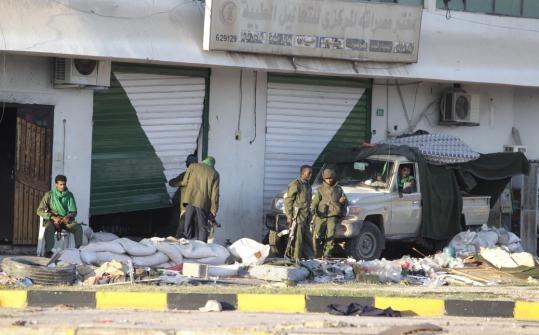 Libyan soldiers held a position during fighting in the coastal city of Misurata during a press trip yesterday organized by Libyan authorities. At one point, journalists took cover amid gunfire. (Pier Paolo Cito/Associated Press)
By Hadeel Al-Shalchi Associated Press / April 9, 2011

MISURATA, Libya — Moammar Khadafy’s government brought foreign journalists to Misurata yesterday to show that its forces hold significant control over the only major city in western Libya still in rebel hands, but the trip suggested that their situation had if anything grown more dire after weeks of laying siege to the enemy’s stronghold.

Reporters were bused to the same intersection, more than a mile from downtown, where government officials took them about 10 days ago. Back then, it was to show the effects of a NATO airstrike. This time, it was simply as far as the tour could go before gunfire and shelling forced officials to turn around.

At one point, the journalists took cover amid gunfire. A Libyan soldier received a head wound in the shooting and was taken to a hospital.

Buildings were heavily pockmarked from battle, as they were previously. But while Khadafy’s forces at the intersection were seen on open ground on the earlier visit, this time the few soldiers there were hiding out in buildings or on rooftops.

The scene along the road from Tripoli — dotted with burned-out tanks, antiaircraft guns hidden by vegetation, and checkpoints made of tires and sand banks — underscored the devastating struggle over Misurata. It is the most sustained conflict in the Libyan uprising and the focus of a growing international effort to bring aid by sea to besieged residents caught in the crossfire.

Just 100 miles southeast of the capital Tripoli, Misurata is symbolic and strategic for both sides, each of which holds key parts of Libya’s third-largest city.

Rebels, who hold central neighborhoods and the critical port area, want to hang on to an important foothold deep in Khadafy’s territory.

Government forces surround the city and patrol the main roadways. Their aim is to consolidate control over the west in preparation for a possible push against largely rebel-held eastern Libya.

As a group of international journalists approached Misurata yesterday on the government-controlled visit, smoke could be seen coming out of the city from the distance. In the area where the tour turned back, streets and homes were utterly deserted.

Even as the showdown deepens, NATO has struggled with how to work Misurata into its airstrike missions. The alliance has been cautious about waging bombing runs in the city because of the risk of civilian casualties.

Even the limited look inside Misurata was unusual. Libyan officials have tried to block journalists from entering the city, although a few reporters have entered previously by sea.

It was unclear which side had the upper hand in the latest fighting. But a witness said rebel forces were trying to keep Khadafy’s troops from taking full control of a route linking central Misurata to its port, a crucial lifeline for ships carrying humanitarian supplies to the battle zone.

The witness’s account could not be independently verified. There were also no credible reports on casualties.

But Misurata has become a rallying cry for aid efforts. In Geneva, UNICEF spokeswoman Marixie Mercado told reporters that the agency has received “reliable and consistent reports of children being among the people targeted by snipers in Misurata.’’

A ship from the UN’s World Food Program reached Misurata on Thursday, delivering 600 tons of food and medical supplies. The food, including flour, vegetable oil, and high-energy biscuits, are enough to feed 40,000 people for a month, the Rome-based UN agency said in a statement.

A vessel chartered by the International Committee of the Red Cross is expected today, and a Turkish charity planned to dispatch an aid ship next week.

In Brussels, the European Union’s foreign policy chief told UN Secretary General Ban Ki-moon that the EU is ready to launch a humanitarian mission to Misurata if approved by the world body, officials said. The special task force for Misurata could be in action within several days, said the officials, who spoke on condition of anonymity because of the sensitivity of the issue.

At the same time, Washington is looking for other ways to further squeeze Khadafy after turning over the air campaign to NATO last week.

The Treasury Department expanded economic sanctions to five additional Libyan officials, including the prime minister and the ministers of oil and finance. The United States has already frozen more than $34 billion in assets.