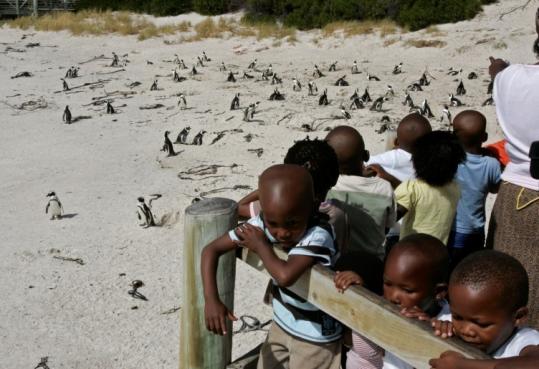 BOULDERS BEACH, South Africa - Nesting in the sparkling sand, preening on the rocks and darting through the waters, the penguins on the southern tip of Africa are the ultimate crowd-pleaser. But crisis looms.

Short of food, exposed to predators and the sun, their numbers are plummeting. But salvation may rest in a simple man-made solution - housing for penguins.

Dotting the shore of this penguin colony near the Cape of Good Hope are 200 nesting boxes, each big enough to house a happy family of parents, eggs, and chicks. The experiment has worked well on a more distant penguin island in South African waters, and wildlife rangers are eager to see whether the boxes recently installed on Boulders Beach, where tourists can watch the birds up close, will prove equally attractive.

"You look at the penguins and think they have a lovely time in sunny South Africa, but it's a struggle," said Monique Ruthenberg, a ranger with the Table Mountain National Park in Cape Town, where summer temperatures recently hit 104 degress.

Park authorities installed the boxes - made of a fiberglass mix, shaped like a burrow, and dug into the sand to mimic the real nests - at Boulders Beach as part of desperate efforts to protect the dwindling populations of African penguins.

It has been a losing struggle. Numbers of the curious creatures have plummeted from about 3 million in the 1930s to 120,000 because of overfishing and pollution. Some specialists fear the species will die out in as little as a decade, and are particularly alarmed at the prospect of global warming increasing the number of scorching days, raising water temperatures and altering fish migration patterns.

The Boulders Beach colony has fallen 30 percent from a peak of 3,900 birds in 2005 to 2,600 and some of the island colonies have suffered calamitous declines of 50 percent.

The African penguin, also called the jackass because of its bray, is the only one to inhabit the continent. It has shorter feathers than the Antarctic birds because it doesn't face such cold and is just 20 inches tall.

The Boulders Colony began in 1985 when a couple of penguins moved from a nearby island onto the beach in the naval base of Simon's Town, decided they liked it, and stayed.

So many followed that authorities had to build fences to prevent them from invading people's gardens. But the tourists poured in.

About 600,000 a year now visit Boulders Beach, which boasts that it is the only place in the world where people can swim with penguins.

The real life "Happy Feet" are unfazed by all the attention and, apart from a few who were killed while snoozing under visitors' cars, don't seem to have suffered from their contact with humans.

There is a constant risk from pollution. The last big oil spill was in 2000, when 20,000 penguins were trucked about 470 miles from Cape Town to Port Elizabeth to allow workers time to clean up oil from a wrecked tanker while the birds swam home.

But even in years with no big accidents, the South African Foundation for the Conservation of Coastal Birds has to rescue and rehabilitate hundreds of birds whose feathers are covered in oil illegally dumped at sea and washed ashore.

The population fall continues, especially on the more remote Dyer Island where numbers have plummeted from 23,000 breeding pairs in the early 1970s to 1,500 pairs.

"It's horrible," said Wilfred Chivell, chairman of the Dyer Island Conservation Trust, who blames bad fishing management for a dwindling supply of sardines and pilchards, the penguins' main food.

Such is the competition for fish that Ruthenberg says young seals attack penguins to rip the fish from their bellies.

Gulls prey on the eggs and young chicks, often working as a team; the nesting penguins leave their eggs to chase away the invaders, while another gull sneaks in behind, she said.

Eggs lie abandoned in the sand because the parents have taken to the water to escape the heat.

Once a nesting pair abandons its eggs, other penguins often follow suit.