Even children have had enough 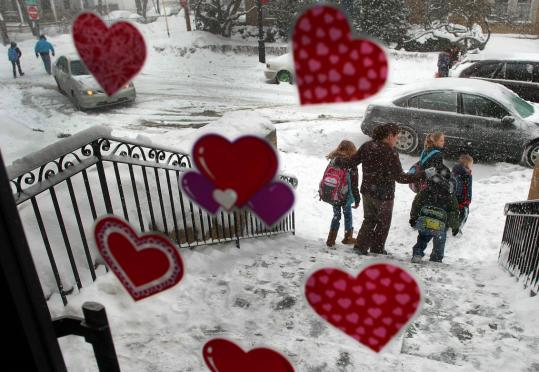 Parents came to pick up their schoolchildren during early dismissal yesterday at the Quincy Catholic Academy, where hearts were put on the front door in anticipation of Valentine’s Day. (John Tlumacki/Globe Staff)
By Akilah Johnson Globe Staff / February 2, 2011

You might expect the region’s youngest residents to be overjoyed by the endless snow — after all, it offers sledding, fort-building, and snowballs instead of spelling words and science lessons.

But it turns out that, in a winter that seems headed for history, many local elementary school students are also exhausted, annoyed, and overwhelmed — emotions principals say might be adopted from their parents — by all of this snow.

“I love to play in it,’’ said Jillian Toomey, 8, a third-grader at John D. Philbrick Elementary School in Roslindale.

But she’s also “kind of getting sick of it’’ — the “it’’ being the 60- plus inches of snow that has clogged Boston streets this winter.

“It’s just kind of annoying,’’ Jillian said yesterday as a fresh coat of snow covered the school’s playground. “We’re going to have to go into vacation time and Saturdays and Sundays because of so many snow days. And one time, we were on the bus getting home and the bus got stuck on top of a hill and I didn’t get home until, like, one and a half hours after we were supposed to.’’

Jillian’s fears about vacation are well-founded. Today makes the fifth day that Boston Public Schools have closed due to snow this winter. Any more snow days, and the school year will be extended, said district spokesman Matt Wilder. If there are more than three additional snow days, spring break or other holidays could be at risk, he said.

Catherine Cameron, principal at Quincy Catholic Academy, said she has been fielding lots of questions about the last day of school from her students, too. More surprising, she said, is the grumbling she’s heard about the snow.

“For something like the snow, kids and parents tend to have different ideas,’’ Cameron said. But not this winter.

“It’s funny. I think they listen to their parents,’’ she said. “I think the parents have gotten to the point where it’s overwhelming to them, and they say a lot more.’’

Take Nemyasha Shoko, 9, for example. She said she likes the snow, but has a problem with it, too. It’s ruining her morning commute. The fourth-grader at Quincy Catholic said she now must wake up extra early to avoid being tardy.

“It was fun at first, because it was a little bit, but now it’s kind of a lot, and causing traffic,’’ said Nemyasha, her pink coat zipped up tight as school let out early yesterday. “In the morning, it makes you late for school.’’

Some of her peers at Philbrick Elementary say they love the fun to be had in the snow, but can do without the all the extra attire. Lea Carrigg, 8, said her twin sister’s gloves weren’t entirely waterproof and ended up “stinking up her hands.’’ Classmate Johnny François, 8, said he dons four pairs of pants during some of his outdoor adventures.

“It’s a bit overwhelming to get dressed in because you have to put on your snow pants and gloves and stuff, and then when you go inside again you have to take it all off,’’ explained Lila Moon, 7, who had just shed her bulky brown winter outerwear.

Though these boys and girls harrumph like adults about the snow, they are still children, able to do what most grown-ups cannot: Look at the blanket of white covering the playground and imagine a campfire. Just talking about their game of make-believe makes these second-graders speak at a rapid-fire pace.

“I found this shovel-thing, like from a garden, and [my teacher] gave me the idea to rake the snow,’’ Johnny said.

Lila broke in. “And then me and Lea pretended, like, it was wood, and we made a pretend fire and made s’mores,’’ she said.