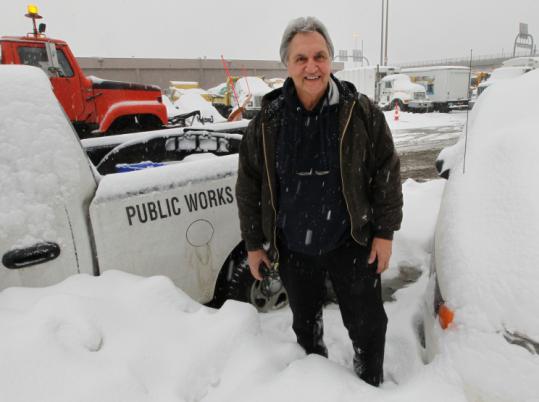 At the center of the swirl of another storm, with the snow and the slush and the salt, Elmo Baldassari wedged a phone to his ear.

Pulling glasses off his forehead, he stared at his computer screen yesterday, watching a live feed from a traffic camera on Blue Hill Avenue. His BlackBerry phone chirped. His walkie-talkie crackled.

“Right now we’ve got 366 pieces of equipment on the street,’’ Baldassari said into the phone in a steady but understated tone, speaking on a conference call with scores of other city officials. “Chopping down some of those four-foot walls they built around their vehicles, that’s my goal for this afternoon.’’

Meet Boston’s field general for snow removal, the tactician fighting the city’s war against the weather. Baldassari, 59, is the deputy commissioner of public works, a job that has rarely faced the challenges of the past month as the city has been buffeted this winter by 16 snow events, from freezes that required street salting to major storms.

“I don’t mind one or two, but this has been the winter from hell,’’ Baldassari said after the conference call. “It’s nonstop. These guys are giving it their all but it’s a tough racket. I hope the public understands that.’’

Baldassari prayed that forecasters are wrong about the freezing rain and ice. He prayed for a thaw so the permafrost melts before side streets become as narrow as bobsled tracks. And he prayed the city could take advantage of the parking ban on major streets to bulldoze through month-old ice berms around parking spots, hauling snow away in dump trucks.

“He’s got the know-how to do it, and he knows how to get the most out of his men,’’ Mayor Thomas M. Menino said yesterday of Baldassari. “I think he does a good job. While a lot of cities have suffered during this difficult time, I think we’ve handled it well. A lot of that is management.’’

Growing up in Hyde Park, Baldassari went into the private sanitation business, moved to West Roxbury, and raised six children. Menino said the city recruited Baldassari to join public works a decade ago. In April 2008, Menino made him deputy commissioner to oversee reforms after a city investigation found that some public works employees routinely left work early and failed to complete basic tasks.

Baldassari has settled into his cinder block office in the public works building on Frontage Road like a man who does not spend much time in an office. Some of the wall hangings — like the nautical map of Block Island Sound — dated to his predecessor. A rock served as a doorstop. He has a window with a view of a flat roof, a cinder block wall, and the incessant cascade of snow.

Baldassari came to work yesterday at 3 a.m. “I’ll be here through tomorrow night,’’ he said. “I tried to go to bed [Monday] at 10, but the phone kept ringing.’’

He dressed yesterday for work like a man with a background in sanitation. He wore sturdy leather boots, durable black slacks, a hooded sweatshirt, and a thick jacket. His uniform was practical and rugged but not fancy, lacking Gore-Tex or any high-tech snow equipment.

During the storm, Baldassari bounced between his office and the halls of the public works building, greeting plow drivers by name. He prefers to be out on the road with black coffee, driving a four-wheel-drive hybrid sport utility vehicle to each of Boston’s 10 public works yards.

During one storm last month, the heavens opened with snow gushing down at a rate of 4 inches an hour. The challenge this winter is finding a place to put it.

In East Boston, Baldassari eyed an expanse of rock-hard snow at a T-intersection that he targeted for removal. On East Eagle Street, he stopped at the District 9 public works yard, a trailer that smelled like cheesy pasta and hamburgers.

The district supervisor, James Grossmann, outlined an aggressive attack for the afternoon, taking advantage of the parking ban to clear Bennington Street, Maverick Square, and more.

“It’s going to look like Palm Beach down here,’’ Baldassari said with a smile.

They all know forecasters expect more snow today. Another storm may come as soon as Saturday.