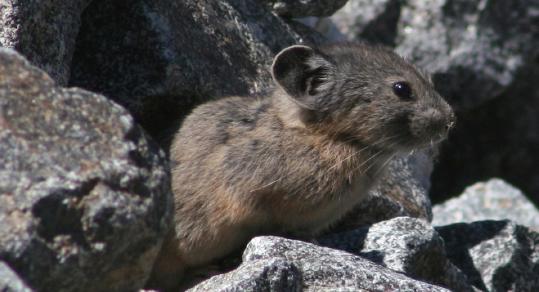 The North American pika has moved upslope at a rate of 475 feet per decade since the 1990s, 10 times its earlier rates. (Scott Loarie/Associated Press)
By Brian Vastag Washington Post / August 19, 2011

WASHINGTON - Across the globe, plants and animals are creeping, crawling, slithering, and winging to higher altitudes and higher latitudes as global temperatures climb.

Moreover, the greater the warming in any given region, the farther its plants and animals have migrated, according to the largest analysis to date of the rapidly shifting ranges of species in Europe, North America, Chile, and Malaysia.

“This more or less puts to bed the issue of whether these shifts are related to climate change,’’ said Chris D. Thomas, a conservation biologist at the University of York in England, who led the work published yesterday in the journal Science. “There isn’t any obvious alternative explanation for why species should be moving poleward in studies around the world.’’

The new analysis reexamined more than 100 previous studies to give a global picture of altitude shifts in 23 groups of plants and animals and latitude shifts in 31 groups.

While Thomas and colleagues found great variation in how far individual species had shifted over decades, a trend was clear. On average, species migrated uphill 36 feet per decade and moved away from the equator - to cooler, higher latitudes - at 10 miles per decade. These rates are two to three times faster than those estimated by the last major migration analysis, published in 2003.

“The bottom line is the same point we’ve been making for more than a decade,’’ said Camille Parmesan, an ecologist at the University of Texas at Austin who has documented the northward shift of butterflies in Europe but was not involved in the new study. “There is a very consistent response globally across groups of species. And the rate of this movement is probably accelerating.’’

For some species, warming opened up new zones to colonize. For others, warming drove them to seek cooler climes.

Plants and animals tend to thrive in a narrow temperature range, said Thomas, so they seek cooler ground when temperatures rise.

The mountain-dwelling pika of North America is a prime example. For most of the 20th century, these rodents moved upslope at an average of 43 feet per decade, historical surveys show. But since the late 1990s, the critters scurried upward far faster, climbing 475 feet per decade, researchers at the University of Nevada and elsewhere reported this year.

Likewise, on Mount Kinabalu in Borneo, moths are flapping higher and higher to escape the heat, said I-Ching Chen, an ecologist at Academia Sinica in Taiwan. In 1965, students documented the ranges of more than 100 species of moths on the mountain, a task Chen repeated in 2007. She found that moths had moved upslope an average of 220 feet in altitude in the intervening four decades.

Mountain species, in particular, “are struggling to keep pace’’ with global warming, said Shaye Wolf, climate science director at the Center for Biological Diversity. “We’re concerned many species won’t be able to move quickly enough’’ - or that they will run out of mountaintop to flee to.

As species shift ranges, they are coming into contact with other species in new patterns, Chen said, a phenomenon called reshuffling. But ecologists are just beginning to study how species reshuffling may impact the health of ecosystems.

As for human health, research shows that mosquitoes that can carry malaria, dengue fever, and other tropical diseases have expanded their ranges in recent decades, said Emily Shuman, an infectious diseases physician at Weill Cornell Medical College in New York. The World Health Organization, the Centers for Disease Control and Prevention, and the US Global Change Program - established in 1990 to coordinate US government climate change work - have all warned that insect-borne diseases will spread more widely as the planet continues to heat up.