Targeting an audience of monkeys 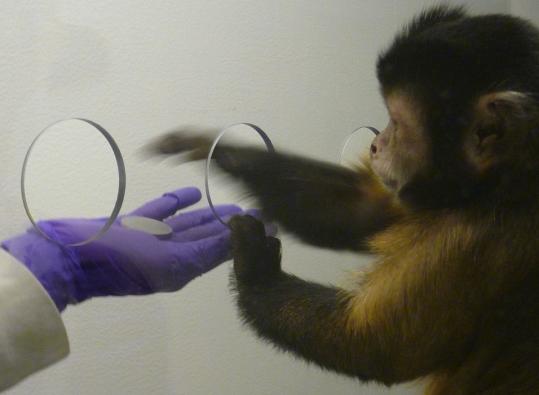 A capuchin monkey used a metal disc as currency in an experiment that predated the tests of the animals’ receptiveness to marketing. (Laurie Santos)
By Carolyn Y. Johnson Globe Staff / August 1, 2011

It will be an ad like no other. Hoping to learn how advertising works, a Yale University psychologist has teamed up with a New York ad agency to design and test a novel marketing campaign - aimed at monkeys.

The idea is to explore whether susceptibility to messages, such as those used in marketing, is deeply ingrained in humans because it is embedded in our DNA - inherited from long-ago ancestors common to us and monkeys - or whether it is a strictly human weakness. The research is part of a broader effort to understand the evolutionary origins of our thought processes and behaviors, especially when it comes to making economic decisions.

Specifics of the ad, thought to be the first aimed at nonhumans, are under wraps, but the concept is familiar: Sex sells. Or, in this case, racy images of Capuchin monkeys sell.

If the monkeys are swayed by the campaign - a big if - it could help explain why people’s preferences are influenced so easily. We may simply be hardwired to succumb to the allure of attractive people hawking luxury cars and fancy perfumes.

“I think one of the worries is that if we’re really built to process information in this way, it’s going to be harder to override those processes than we think,’’ said Laurie Santos, an associate professor of psychology at Yale who is leading the project.

For years, researchers have been testing whether elements of complex human cognitive abilities, from language to altruism, are shared by other animals, and in many instances they have found we are less distinct than once thought. Santos and others are interested in the evolutionary origins of a less admirable set of traits - the biases in our thinking that can lead us to make bad decisions about money, such as overestimating the value of objects, or poorly assessing risk.

The biases could be biologically ancient, predating the human use of money, said Michael Platt, director of the Center for Cognitive Neuroscience at Duke University, “or there’s something deep and strange about this monetary currency that leads to a whole host of irrational biases, because our brains are not equipped to deal with money.’’ Like Santos, Platt hopes to plumb aspects of human behavior by showing ads to monkeys.

Santos began the work years ago, by setting up a Capuchin monkey marketplace in her lab at Yale. In collaboration with economist Keith Chen, she taught monkeys to use metal discs as currency to purchase apple slices, grapes, or gelatin cubes. The monkeys acted much like human shoppers, the researchers reported, taking advantage of sales and trying to avoid losses.

Then, the researchers conducted experiments to see whether the monkeys made the same kinds of irrational economic decisions that people often do.

Like humans, monkeys were reluctant to trade away something in their possession unless they were offered an alternative of far greater value - in the monkeys’ case, they parted with a fruit disc when offered a highly valued alternative, such as a fruit roll-up stuffed with marshmallow filling. And the monkeys were also more likely to take risks when there was a possibility of avoiding a loss, not the opportunity for a gain.

Then last summer, Santos met Keith Olwell and Elizabeth Kiehner of Proton Studio, the New York ad agency, at a conference where she was presenting her research. The ad executives were fascinated that the monkeys used money like people often do. Researchers wondered whether they would they act like consumers in other ways.

Santos pointed them to a 2005 study led by Platt that found thirsty rhesus monkeys would give up juice to stare at photos of high-status monkeys or female monkeys they found attractive. With that in mind, Olwell and Kiehner began work, all self-funded, on their marketing campaign.

“We’re creating actual monkey brands; we made a logo that has 100 percent never been used by a human,’’ Kiehner said. The plan is to create a kind of billboard, to see whether advertising can change a monkey’s preferences for two things he might like equally well. Olwell and Kiehner compare it with the way human marketing is done: Can you take two equivalent products and, through an ad, make people want one more?

These types of experiments have critics. Alan Silberberg, a psychology professor at American University who published a critique of one of Santos’s studies, thinks researchers who test for human behaviors in animals are often too quick to draw broad conclusions from results.

“The problem is that there are inevitably differences in how the experiments have been conducted in humans and in nonhumans,’’ Silberberg wrote in an e-mail. Therefore, scientists may perform an experiment meant to be equivalent to an experiment in humans, but ignore the ways in which the scenarios are not the same, which could influence the interpretation of the findings.

Ultimately, Santos believes that our understanding of human decision-making will be richer if its evolutionary roots can be untangled.

“You can use the example of fear of snakes: When natural selection builds in a strategy, it’s often difficult to override,’’ Santos said. “So that means that economic situations that play on our biases are going to be hard for us to overcome.’’