In battle to save hemlocks, hope rests on a beetle 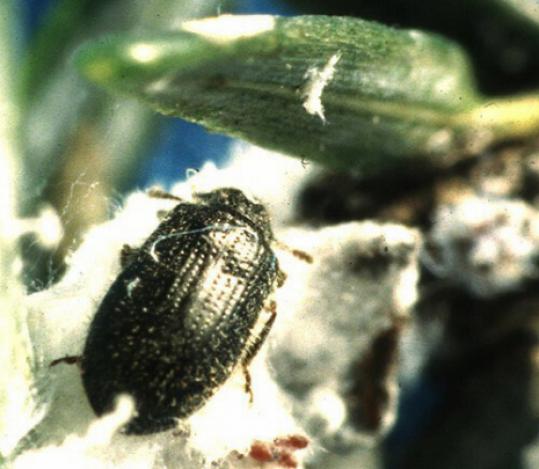 Armed with a Wiffle Ball bat and a canvas sheet, entomologist David Mausel is scouring forests across New England for an ally.

That ally - a small jet-black beetle - feasts on the even tinier but voracious hemlock woolly adelgid, which is ravaging the region’s hemlocks. The adelgids latch onto twigs, feeding on the trees until their needles yellow and fall and the trees die.

Mausel has been in cahoots with these beetles since 2007, when he began collecting a small army of them in Idaho and brought them back East to release at specific study sites.

Now, he is beginning to revisit those plots to determine whether the beetles have begun to establish themselves - and to begin to answer the bigger question of whether they are reducing the adelgid population and saving hemlocks.

Mausel, a postdoctoral research fellow at the University of Massachusetts at Amherst, calls it “finding a beetle in a haystack.’’

But on a recent visit to a site in Wendell State Forest in Western Massachusetts, he thwacked a hemlock branch and saw a beetle fall onto the canvas sheet held underneath: the first, preliminary positive evidence the beetles are beginning to make a home in the forest.

“It’s going to take time for the beetle numbers to build up,’’ Mausel said, adding that for some trees the beetle counterattack may come too late. “We have to get to these infested stands early to prevent adelgid outbreak.’’

The adelgids are insects about the size of the period at the end of a sentence, Mausel said.

They are an invasive species from Japan, accidentally introduced to Virginia in the early 1950s.

They have rudimentary legs, barely necessary since they settle down near the base of a hemlock needle and use their piercing, sucking mouths to feed on the energy supply of the tree.

In New England, the adelgid invasion has been slowed by cold winters that kill them, but farther south, they have wreaked havoc on woodlands.

“In a lot of locations, they’re done - they’re pretty much gone,’’ said Scott Salom, a professor of entomology at Virginia Tech. “Where you get pure stands of hemlock, you can lose them all.’’

As a graduate student at Virginia Tech, Mausel began working with a strain of the beetle, called Laricobius nigrinus, captured in the Pacific Northwest.

The beetles are specifically adapted to feed on adelgids. The adult beetle lays a single egg in the woolly sac of the adelgid, and the larvae munch on adelgid eggs. Adult beetles also feast on developing adelgids.

Experimentation showed the beetle was specialized to feed on hemlock woolly adelgids and not on other beneficial insects, so federal and state governments approved its use in nature.

Salom said that in some areas, those beetles have been released since 2003 - and while the scientists do not yet know whether the beetle can save trees, they are seeing positive signs it is establishing itself.

“We have anecdotal evidence it’s keeping understory trees alive, and that [beetle] populations are building up in these areas,’’ Salom said.

One problem remained: The Laricobius nigrinus harvested from the Pacific Northwest that was successfully introduced into areas farther south did not seem to thrive in colder climates. So Mausel found the same species adapted to colder climates in Idaho and Montana, and began to capture and introduce them at 13 sites in the Northeast.

Ultimately, by comparing canopy cover and adelgid and beetle density in treated areas against measurements taken in control plots, the researchers hope to measure how effective the beetles are at controlling the adelgid.

That process could take years, but it is coming at a critical juncture because of climate change, said Joe Elkinton, a professor of entomology at UMass who works with Mausel.

“We’re depending on cold winter temperatures to keep the adelgid down,’’ Elkinton said.

“If we start to have warmer and warmer winters, that’s going to favor the adelgid, and we will start to lose trees unless the beetle kicks in and saves the day for us.’’