Diplomacy opens a portal to profit 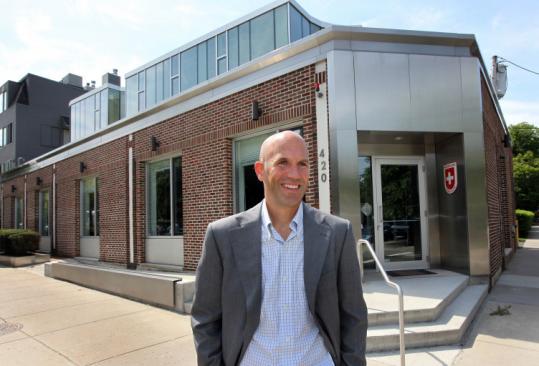 CAMBRIDGE - It’s no accident that the Swiss consulate for New England, with its huge windows, exposed brick, and chic Cambridge address, feels more like a high-tech start-up than a European diplomatic outpost.

For one thing, there is an actual start-up company inside - a Swiss software firm trying to break into the US market.

The fledgling company has been invited to work out of the consulate building for up to six months, and take advantage of the technical support it offers as part of an “incubator’’ plan for Swiss small businesses.

“A consulate is usually a pretty closed institution,’’ said Jost Allmeling, founder of the firm. “They are doing a great job here in making this an open house.’’

Indeed, the consulate has an inviting ambience, with cushions on the floor in the meeting “pit’’ and wired flat screens for Web and video conferences. It is very consciously located between Harvard and the Massachusetts Institute of Technology, and it taps into both.

They don’t even call it a consulate anymore; they call it Swissnex.

Boston has long been one of a handful of American cities with a significant foreign consular corps, hosting full-time and honorary consuls general from 55 countries. Now, thanks to its combination of globally renowned technology companies and universities, Boston has also become a magnet for new approaches to cross-border linkages, with the Swiss and British consulates leading the quiet transformation of diplomacy.

“It’s one of the oldest forms of intergovernment relations. . . . It’s also the new frontier,’’ said Alan Henrikson, a professor and the director of diplomatic studies at the Fletcher School of Law and Diplomacy at Tufts University. “The hierarchies of diplomacy really have been flattened out considerably, so the distinction between the embassy and the consulates is being considerably reduced.’’

Don’t even think about coming to most of these leading-edge outposts for visas or passports. Much of that work - long the backbone of traditional duties for consulates, which are essentially diplomatic branch offices - has been centralized in embassies in Washington. Only one of the British consulate’s 25 staffers works on issues related to services for British citizens, and only three do conventional political and cultural work. Two-thirds of the professional staff focuses on science, technology, trade, and investment.

The British consulate general moved from downtown Boston across the river to the Kendall Square biotech hub in 2000, prodded by Gordon Brown, then-chancellor of the exchequer and now prime minister, after a Massachusetts vacation awakened him to the value of strengthening ties with the region’s leading technology institution. Brown soon fostered two projects, said Boston Consul General Phil Budden: the Cambridge-MIT Initiative, linking the University of Cambridge with MIT, and Britain’s Global Science and Innovation Network, which added science and technology offices to many consulates - starting with Boston.

The British offices will soon move again, from the building to a new home around the corner in the Cambridge Innovation Center - owned by MIT. When the British ambassador to the United States, Sir Nigel Sheinwald, visited Boston for a day in July, he didn’t rush to Beacon Hill to see the state’s politicians. Rather, he spent an hour with MIT’s president, Susan Hockfield, to discuss the many British-MIT programs, including several focusing on climate change and green technology.

Other governments are also turning their Boston consulates into innovation centers. The French have created an Office for Science and Technology in the Boston consulate, and have built a partnership with MIT that brings 70 student interns a year to France. The France-MIT “seed fund’’ provides grants to students from both countries to travel abroad for cutting-edge research. The German government, too, is increasing science and technology links.

The Chinese government is said to be checking out possible locations in Boston to establish an office to boost technological and academic ties. Norway has opened an “innovation office’’ in Boston, focusing on biotechnology.

But no one has done it as energetically as the Swiss, better known for precision watches and secretive banking than open-door innovation.

Much of the impetus comes from the dynamic consul general, Pascal Marmier, himself an example of how Switzerland has been willing to apply new thinking to diplomacy. Marmier is not a career diplomat. A lawyer with degrees from the University of Lausanne and Boston University, he worked as a management consultant in Switzerland and joined the newly launched Swissnex in Cambridge in 2001 - with the undiplomatic title of project manager for innovation and entrepreneurship.

In 2008, he was named consul general and was given diplomat status. But he might be called networker in chief. He spends most of his time relentlessly connecting Swiss and American tech-oriented academics and entrepreneurs.

One breakthrough in conceiving Swissnex was the government’s decision to allow private funding for new Boston offices, financing everything from building costs to network and conferencing systems. Governments traditionally shy away from such intermingling of private and public sector spending, but that seems chaste in an age when the business of the consulate is business.

Switzerland’s ambassador to the United States, Urs Ziswiler, said that many of the programs in Boston, and in a similar office in San Francisco, emphasize Switzerland’s success in green technology, from cleaner rivers to bike-friendly cities.

In Boston, Marmier and his team turned out for “Bike To Work Week’’ in suits, to show the European tradition of biking to work in business clothes. The team also has forged river-swimming demonstrations on the banks of the Charles River to show how it could be reclaimed.

Jerry Schaufeld, a management professor at Worcester Polytechnic Institute who has lectured to visiting Swiss venture leader groups and met with visiting Swiss academics, said, “there’s no other mechanism like this. I don’t know where else that kind of transfer can happen.

The British government just took a dozen Boston-area green-tech entrepreneurs to the UK to partner them with colleagues.

“Trade promotion is no longer just reactive,’’ said Budden, the consul general. “Our teams actively go to companies in Britain, especially smaller and medium sized companies that might not find partners here easily.’’

MIT professor Edward B. Roberts, a specialist in entrepreneurship, said in a Web seminar last month that foreign governments in the Boston area are sharply raising their visibility and involvement with students and small businesses.

“If you are any kind of a technical organization or entrepreneurial organization [and] you are looking for someone to host you, in a beautiful space overlooking the Charles River, all you have to do is tell the British Embassy . . . and they will jump on the opportunity. The same thing is true of the French Embassy. The same thing is true of the Swiss Embassy. . . . This is now a very different class of engagement and I welcome it.’’

James F. Smith can be reached at jsmith@globe.com. His blog is boston.com/worldlyboston.