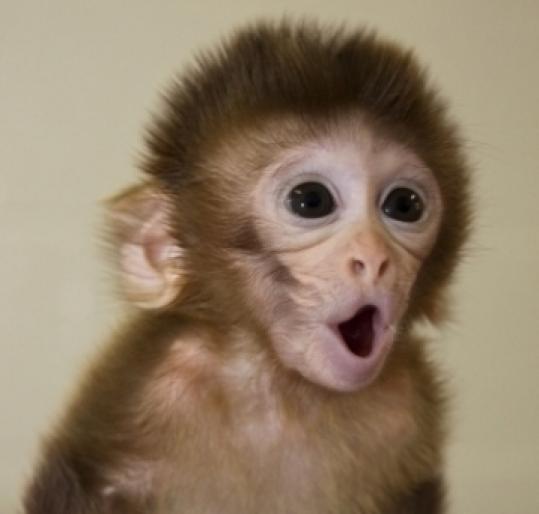 Four baby monkeys, including Spindler (above), were born through the DNA research. All appear healthy. (Associated Press)
By Rob Stein Washington Post / August 27, 2009

WASHINGTON - Scientists have produced monkeys with genetic material from two mothers, an advance that could help women with some inherited diseases have healthy children but that raises safety, legal, ethical, and social questions.

Using cloning-related techniques, the researchers developed a way to replace most of the genes in the eggs of one rhesus macaque monkey with those from another, fertilized the eggs with sperm, transferred the resulting embryos into animals’ wombs and produced four apparently healthy offspring.

The technique was developed for women who carry disorders caused by defects in a form of DNA passed only from females to their children, and the researchers said they hoped the work will eventually translate into therapies for people.

“We believe this technique can be applied pretty quickly to humans and believe it will work,’’ said Shoukhrat Mitalipov of Oregon Health & Sciences University in Portland, who led the work published online yesterday by the journal Nature.

Many scientists hailed the research as a technically impressive feat that could help many families rid themselves of a variety of disorders caused by defects in genetic material known as mitochondrial DNA.

But the work also raises a variety of potentially thorny ethical and legal issues, including creating offspring with DNA from two mothers and a father.

“With this you have potentially three genetic parents,’’ said David Magnus, director of Stanford University’s Center for Biomedical Ethics.

If applied to people, the work would also alter a family’s genes in a way that would be passed down for generations, which would violate a longstanding taboo in altering the so-called germline because of the potential of unforeseen consequences. Some ethicists worry, too, that germline genetic manipulation would give rise to a market in elective genetic enhancements.

The researchers acknowledged the work might raise ethical questions, but said those needed to be balanced against the potential benefits.

Mitochondrial DNA is found inside structures in cells called mitochondria, which are often referred to as the power plants for cells because they provide energy for cell growth and other functions. Defects in this DNA may cause rare disorders and can sometimes be involved in more common disorders including Alzheimer’s, Parkinson’s, and Huntington’s diseases.