Again, to the moon - and beyond 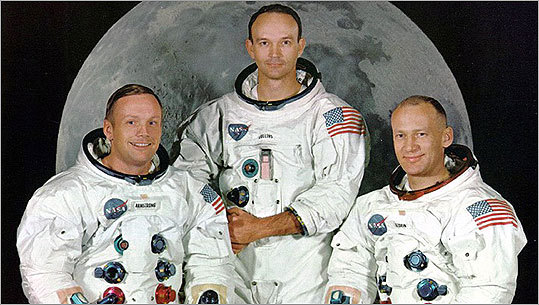 Thursday marks the 40th anniversary of Apollo 11’s liftoff toward the moon – and the first-ever mission for two US astronauts to walk on the moon’s surface. Stephen Hawking, often considered to be the greatest mind on science since Einstein, co-wrote this introduction for a just-published book on the Apollo mission with his daughter, Lucy, a journalist and author. It is reprinted with permission.

We thought space was worth a big effort in the 1960s. In 1961, President John F. Kennedy committed the United States to landing a man on the moon by the end of the decade. This was achieved just in time by the Apollo 11 mission, in 1969. The historic images captured by the Apollo astronauts, some of which are featured in this book, helped fuel our fascination with science and technology.

Why did we go into space? What was the justification for spending all that effort and money on getting a few lumps of moon rock? Weren’t there better causes here on Earth?

In a way, the situation was like that in Europe before 1492. People might well have argued that it was a waste of money to send Christopher Columbus on a wild goose chase. Yet, the discovery of the New World made a profound difference to the old. Sending humans to the moon may yet prove to have had an even greater effect. It changed the future of the human race in ways that we don’t yet understand and may have determined whether we have any future at all. It hasn’t solved any of our immediate problems on planet Earth, but it has given us new perspectives on them and caused us to look both outward and inward.

After the last moon landing in 1972, with no future plans for further manned space flight, public interest in space and willingness to fund further exploration declined. This went along with a general loss of confidence in science in the West because, although it had brought great benefits, it had not solved the social problems that increasingly occupied public attention.

We need to renew our commitment to human spaceflight. Robotic missions are much cheaper and gather important scientific data, but they don’t spread the human race into space, which should be our long-term strategy. If one is considering the future of humanity, we have to visit other worlds ourselves. Exploring other worlds won’t be cheap, but it will take only a tiny proportion of this world’s resources. NASA’s budget has remained roughly constant in real terms since the time of the Apollo landings, but it has decreased from about 4 percent of the U.S. federal budget in 1970 to 0.6 percent now. Even if we were to increase the international budget twenty times to make a serious effort to go into space, it would only be a small fraction of world resources. There are those who argue that it would be better to spend our money solving the problems of this planet, like climate change and pollution, rather than wasting it on a possibly fruitless search for new planetary homes We do not deny the importance of fighting for a better Earth, but we can do that and still spare a few percent for space. Isn’t our future worth it?

A new space program would also increase the public standing of science. The low esteem in which science and scientists are held is having serious consequences. We live in a society that is increasingly governed by science and technology, yet fewer and fewer young people want to go into science. The children of today are the adults of tomorrow, and they need to have a basic understanding of science and technology if they are going to be prepared to make the hard decisions on issues like fuel sources and food production that affect us all. We’ve talked to kids around the world and discovered an enormous appetite and enthusiasm for knowledge about space exploration and science. A significant percentage of students studying sciences at a higher level report that their early interest was sparked by exactly these kinds of topics. Space has the power to ignite children’s imaginations and engage their curiosity. There seems absolutely no doubt that we have never needed to do this more urgently.

Many of today’s space explorers watched the Apollo moon landings in their pajamas, gazed with childhood fascination at the photographs taken, and decided they were going to grow up to extend humanity’s reach to other worlds. Others looked at NASA’s photographs of Earth from space and saw what a beautiful planet we live on, but also how vulnerable it is, and made a stronger commitment to look after it. These images influenced their life choices. What’s next? Can we exist for a long time away from Earth? The International Space Station proves that it is possible for human beings to survive for many months away from planet Earth. Any long-term base for human beings, however, will probably need to be on a planet or moon, where subsurface enclosures can provide explorers with thermal insulation and protection from meteors and cosmic rays, and the raw materials that are necessary to create self-sustaining extraterrestrial communities can be found.

What are the possible sites of a human colony in the solar system? The most obvious is the moon. It is close by and relatively easy to reach. As illustrated in this publication, we have already landed on it and driven across it in a buggy. On the other hand, the moon is small and without an atmosphere or a magnetic field to deflect solar radiation. There is no liquid water, but there may be ice in the craters at the north and south poles. A colony on the moon could use this as a source of oxygen, with power provided by nuclear energy or solar panels. The moon could become a base for travel to the rest of the solar system.

Mars is the obvious next target. It is half as far from Earth as Earth is from the sun and so receives half the warmth. Its magnetic field decayed four billion years ago, stripping the Red Planet of most of its atmosphere, making it impossible for liquid surface water to exist. However, the atmospheric pressure must have been higher in the past because we see what appear to be runoff channels and dry lakebeds. This suggests that Mars had a warm, wet period during which life might have appeared. There is no sign of life on Mars now, but if we found evidence that life had once existed there, we would know that the probability of life developing on a suitable planet was fairly high throughout the universe.

What about beyond the solar system? Our observations indicate that a significant fraction of stars have planets around them. So far, we can detect only giant planets like Jupiter and Saturn, but it is reasonable to assume that they are accompanied by smaller Earthlike planets. Some of these will orbit in a “Goldilocks Zone” where conditions permit liquid water to exist on their surface.

There are approximately a thousand stars within thirty light years of Earth. If 1 percent of each had Earth-size planets in a Goldilocks Zone, we would have ten candidate new worlds. We cannot reach them with current technology but we should make interstellar exploration a long-term aim. By long term, we mean over the next two hundred to five hundred years, and by exploration, we mean with humans.

The human race has existed as a separate species for about two million years. Civilization began about ten thousand years ago, and the rate of scientific and technological development has been steadily increasing. If the human race is to continue for another million years, we will have to boldly go where no one has gone before. The images featured in the following pages are merely a preview of what’s to come.

Stephen and Lucy Hawking wrote this as the introduction to the just-released "Apollo Through the Eyes of the Astronauts," (Abrams) a book with photographs of and by the only people who've been to our Moon.