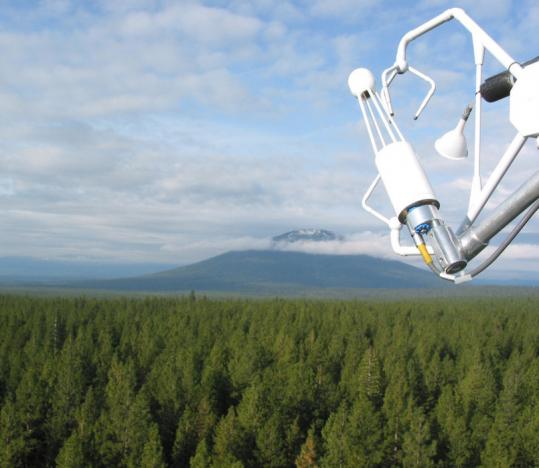 OLD WORKHORSES - Aging forests, such as this one in Metolius, Ore., are getting recognition for the role they play in accumulating carbon. Research published in the journal Nature demonstrates that old-growth forests continue to accumulate vast quantities of carbon. Disturbing them can cause much of this carbon to move back into the atmosphere, the authors suggest.
September 15, 2008
Text size – +

COGNITIVE SCIENCE
Our ability to do math is related to an inherent, intuitive "number sense," a new study finds. Even without formal training in math, humans (even babies) have an intuitive skill to see changes in the abundance of objects around them - a primitive ability we share with pigeons and rats. Researchers call this the "approximate number sense," and distinguish it from learned math skills like counting exactly, subtracting, and adding, unique to our species. Recently, a group of researchers, led by Dr. Justin Halberda at the John Hopkins University, conducted a study to see whether the natural approximate number sense varied from person to person, and if there was any relation between this ability and math skills. Sixty-four 14-year-olds were shown yellow and blue dots that flashed for less than a half-second on a screen. After the flash, participants had to decide whether there had been more blue or more yellow dots. Some trials were easy - for example, participants were shown 20 yellow dots and 10 blue dots. In others, for example, participants were shown 16 yellow dots and 14 blue dots. Participants played this simple "who has more" game for 10 minutes and researchers found that the ability to see which color had more dots varied. Participants best at seeing small differences were also those with higher math scores.

BOTTOM LINE: "We know now that the formal math we learn in school relates with a primitive sense of numbers we have," said Halberda.

CAUTIONS: This is the first study to show a relation between an inherent number sense and math performance. More work is needed to prove the findings of this study.

WHAT'S NEXT: Researchers want to test the acuity of intuitive number sense in 3-year-olds and observe whether it relates to their later performance in math. They also want to see if interventions aimed at improving the natural number sense would help improve math scores.

WHERE TO FIND IT: Nature, Sept. 7, online


Delivery method may affect mother, child bonding
The Cesarean section has become more common in the past 50 years. Currently, doctors help nearly 1 in 3 women in the United States give birth to their baby using this method, involving a small incision made in the uterus. In many cases, the C-section helps protect infants and mothers from ill health, however, the procedure is not without risks. Recently, researchers have become interested in whether the C-section can affect the bonding that occurs between the mother and the baby, especially since some researchers have shown a higher incidence of postpartum depression in this group. To test whether the method of delivery might affect the relationship, Dr. James Swain and colleagues from the Child Study Center at Yale University examined 12 mothers who gave birth either by C-section or natural delivery. After two to four weeks, researchers performed brain MRIs of mothers who were listening to the sound of a baby crying. They found that women who gave birth naturally had increased brain activation in areas corresponding to emotional centers. Why a cesarean delivery should affect the mother's response to a baby's cry is unclear, but researchers say the answer might be oxytocin, a hormone released in the brain during normal labor. "Oxytocin and the normal vaginal delivery might prime the mother's brain for maternal behaviors," Swain said. "Since this is missing in Cesarean deliveries, this might put the mother at increased risk for postpartum depression."

BOTTOM LINE: Natural deliveries may affect the mother's brain differently than the cesarean delivery, potentially having implications for the psychological health of the mother and child.

CAUTIONS: The study was small; only a total of 12 women were surveyed. Larger follow-up studies are required.

WHAT'S NEXT: Researchers plan on looking at the effect of mode of delivery on the brain over a longer period.

WHERE TO FIND IT: The Journal of Child Psychology and Psychiatry, September 2008.