Should I eat that tomato? 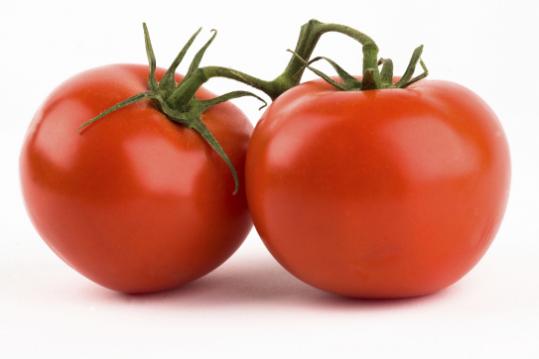 At least 17 Massachusetts residents have been sickened by salmonella from raw tomatoes - part of a nationwide outbreak that has struck more than 750 people since April. Salmonella, which comes from animal waste and causes flu-like symptoms, is particularly dangerous for people whose immune systems have already been weakened by age or illness. The Globe's Neil Munshi spoke with Ken Lee, director of the Ohio State University Food Safety Center, about the possible causes of the outbreak, and what consumers should know to eat safely.

Q: What kinds of tomatoes are safe to eat?

A: Red roma, red plum, and round red tomatoes are on the contaminated list, but cherry, grape, and vine-on tomatoes are safe.

To be extra cautious, cook all tomatoes. But most grocers have been very responsible in only selling tomatoes that aren't implicated in the outbreak, Lee said. Canned goods and salsa - which is pasteurized - are also safe. The government has narrowed its search for the source of the outbreak to farms in Mexico and Florida, so you're safe if you avoid tomatoes from those areas. The problem is that a single box of tomatoes may contain fruit from many farms in different parts of the country or the world. The US Food and Drug administration, which regulates farms, may consider more clearly marking tomatoes with point-of-origin labels in light of this outbreak, Lee said.

Q: Is washing a tomato enough to kill the bacteria?

A: Always wash all fresh produce. But because the salmonella bacteria are on the inside of the tomato, simple washing won't do the trick on contaminated produce.

Q: How did the tomatoes become tainted?

A: Tomatoes are warm when they come off the vine, having been heated by the sun, and are cooled once they are picked, causing them to contract. This contraction, Lee said, may effectively suck all the bacteria and dirt on the surface of the tomato inside, through the stem and button areas. Scarred or bruised tomatoes should be avoided, as those are extra access points for the bacteria. Lee said studies have dismissed the idea that the bacteria could have traveled up into the plant through the roots.

It's not clear why the outbreak occurred now.

Q: Most of the people who have been sickened fell ill in late May and early June. Does that mean the threat has passed?

A: The only way to be completely certain the threat has passed would be if the government had found the exact sources of the contamination - which farms - and how the tomatoes were contaminated. That hasn't happened yet, so consider the warning in effect.

Q: What are the symptoms of salmonella and how can they be distinguished from other illnesses?

A: The symptoms are similar to the flu, and can last four to seven days, just like the flu. Abdominal cramping, fever, and diarrhea will develop between 12 and 72 hours after eating contaminated tomatoes.

Lee said the outbreak is probably underreported, because people often can't remember what they ate yesterday, let alone three days ago, and so may simply think they have the flu.

Q: Should the elderly, infirm, or those with young children be extra cautious?

A: Yes. It shouldn't affect diet too much to eat cooked tomatoes or nix tomatoes completely for the time being.

Q: Can consumers trust restaurants to have safe tomatoes or should they only eat tomatoes they've purchased themselves?

A: Some of the big fast food chains took tomatoes out of their meals because of the outbreak, but most local restaurants are in the same boat as consumers. Restaurateurs buy their produce from the grocer, whom they put their trust in, so consumers should be as cautious as they would with their own purchases at home.

Q: What are the best measures consumers can adopt to reduce their risk of getting sick from any tainted produce?

A: Grow produce at home. If that's impractical - and it often is - consumers should buy locally and be selective in their purchases. The final fallback, Lee said, is to cook all produce.

Q: What's being done to reduce the risk of such contamination in the future?

A: The FDA actually appointed a produce safety taskforce before the current outbreak, Lee said, so their recommendations will have even more weight in light of it. "Human intervention will eventually bring this risk down," he said.