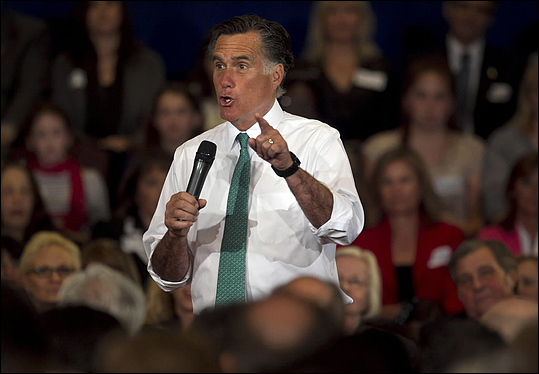 In Iowa, Tea Party activist Ryan Rhodes said he has a ‘‘really good clothespin.’’ That would be for his nose, he said, when he votes for Mitt Romney in November.

Grass-roots conservatives said Wednesday they would reluctantly get behind the former Massachusetts governor now that he has all but sewn up the Republican nomination for president. But their enthusiasm level is low, if not flat-lined, as Romney begins the general election task of rallying the party and energizing a skeptical conservative base — even as he seeks to broaden his appeal to more moderate, independent voters.

‘‘His base was suspicious of his conservatism to begin with, so he needs to be more cautious about moving to the center,’’ said Stephen Hess, a strategist who has advised Republican and Democratic presidents. ‘‘The party politician who moves to the middle does it with a wink: ‘You know where my heart is.’ In this case, people don’t know where his heart is.’’

Romney’s pivot to a general election footing, including any new shifts on issues and his vicepresidential pick, will be closely monitored by Tea Party followers and fundamentalist Christians. These conservative groups could play a decisive role in such Southern swing states as North Carolina and Virginia.

In a television interview Wednesday morning, Romney said he hopes Rick Santorum — the conservative former senator from Pennsylvania who dropped out of the race Tuesday — will campaign alongside him soon and suggested that the former rivals’ shared goal of defeating President Obama will encourage Republicans to coalesce.

‘‘You will see our party more united than it’s been in a long, long time, in part because President Obama has taken America in such a different course than we have ever gone as a nation before,’’ Romney said.

But a sense of ambivalence, resignation, and grudging acceptance hung over conservative reaction to Romney’s sudden victory — which came not with a specific state primary election but with a brief press conference by Santorum in Pennsylvania.

‘‘Santorum’s announcement that he’s ending his campaign is a disappointment to millions of movement conservatives,’’ tweeted a prominent Virginia conservative activist, Richard Viguerie.

In Nevada, retired firefighter Roger Stockton, treasurer of Western Representation PAC, a political fund-raising group, said he intends to continue to maintain his Facebook site, Stop Mitt Romney, because it is still frequented by a few dozen supporters. But he said he nonetheless intends to vote for Romney in November.

‘‘I don’t think it’s a difficult choice to make, if it’s a choice between Obama and Romney,’’ said Stockton. ‘‘It’s more of an acceptance, rather than a feeling of defeat.’’

Yet beyond securing the votes of such conservative activists, it’s unclear whether Romney will also get their donations or organizational skills. Stockton and other activists said they are focusing their fervor and dollars on congressional elections, supporting conservatives in primary campaigns against establishment Republicans.

‘‘I think it is more important that we put our resources into congressional and Senate races,’’ said Stockton.

FreedomWorks, a well-organized Tea Party group with headquarters in Washington and about $3.5 million in its own super PAC, is spending far more money on congressional elections around the country than on anti-Obama advertising, according to disclosure reports. Its supporters protested a Romney visit to New Hampshire last year and the group is unlikely to make any endorsement for president.

That is not to say its members will not cast a ballot for Romney. FreedomWorks spokesman Adam Brandon said Romney could benefit from a ‘‘reverse coattails’’ effect in Ohio, for example, where Tea Party activists are excited about turning out in support of the GOP candidate for US Senate, state Treasurer Josh Mandel.

The president of the South Shore chapter of the Tampa 912 Project, retired Army colonel Michael Zahorsky Jr. of Apollo Beach, Fla., was more enthusiastic about backing Romney, even though he supported Herman Cain and then Santorum during the primary campaign.

As Massachusetts governor, Romney earned a reputation as a moderate, taking up causes that were traditionally the province of Democrats. The signature achievement of his tenure was passing a health care reform law that requires almost every Bay State resident to obtain health insurance. Tea Party supporters blamed Romney for inspiring the Obama White House on the 2010 national health care law, which also contains an ‘‘individual mandate’’ to obtain insurance.

Romney has made sporadic efforts to appeal to the grassroots right wing of his party. Ultimately, his success depended on establishment GOP and business community support, superior organization, a vastly larger warchest, and wave after wave of negative ads that ground down his more conservative opponents.

Even those who know Romney well acknowledge his awkwardness with voters on the conservative end of the spectrum.

‘‘Watching Mitt Romney try to connect with the Tea Party is like watching the Queen of England try to eat a chili cheese hot dog,’’ Mike Murphy, a former Romney consultant, said Tuesday.

‘‘He clearly has a lot of work to do to shore up support among a very important segment of the Republican voting base,’’ said Tony Perkins, president of the Family Research Council, a Christian-oriented advocacy group in Washington, speaking on MSNBC. ‘‘They’re going to vote for Mitt Romney. There’s no question there. The question is the level of enthusiasm and intensity. Will people be voting in great numbers for Mitt Romney, will they be working for him?’’

Polls in North Carolina should give Romney a bit of comfort, however, according to Francis De Luca, president of the Civitas Institute, a conservative religious advocacy group that conducts monthly voter surveys.

Conservative voters supported each of the major GOP primary candidates equally in hypothetical head-to-head contests against Obama. On the negative side for Romney, however: The outcome would be as close as it was in 2008, when Obama won the state by just 14,000 votes.