Tea Party members get behind Gingrich 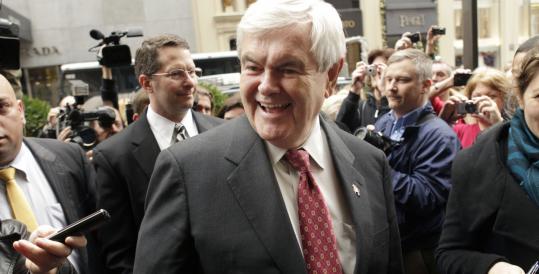 WASHINGTON - He has surged to the top of the polls, having been crowned the latest Tea Party favorite by the movement’s rank and file. Newt Gingrich’sappeal is not universal among Tea Party conservatives, but for now he is their anointed warrior, boosted by his string of fiery debate performances filled with irreverent quips.

As Gingrich courts the group that will be so crucial to his success in Iowa and beyond, Gallup’s latest poll of registered Republicans and Republican-leaning independents has him winning 47 percent of voters nationally who say they support the Tea Party movement. (More than half of Republicans consider themselves Tea Party supporters.) A month ago, Gingrich garnered 18 percent of Tea Party support, behind Herman Cain and Mitt Romney.

“Obviously, he’s really kind of taken over among that group,’’ said Jeff Jones, the Gallup Poll’s managing editor. “They’ve been casting about, looking for someone who is a better fit for them than Romney is. It looks like everyone’s had their chance and basically squandered it, so that leaves Gingrich.’’

Voters supporting the Tea Party movement, which favors smaller government and a balanced federal budget, have shifted from one candidate to another, with each candidate enjoying just a short run at the top. Representative Michele Bachmann of Minnesota, who formed the House Tea Party Caucus, was once the movement’s “it girl,’’ but that was back in the summer, when she won the Iowa straw poll, before she was overshadowed by the entry of Governor Rick Perry of Texas. Perry’s series of debate gaffes opened the door for pizza mogul Herman Cain, who quit the race last weekend following accusations of sexual impropriety. Cue the music for Gingrich.

Tom Jensen, director of Public Policy Polling, which conducts polls by automated phone calls and was founded by a former Democratic pollster, said Gingrich has a significant lead among Tea Party voters in at least eight states, including Iowa, Florida, and Arizona.

“The story with the Tea Party more than any other segment of the Republican Party is what is driving the instability in the race and causing the front-runner to shift so much,’’ Jensen said. “Right now, they’re in the infatuation stage with Newt Gingrich.’’

But not everyone in the Tea Party movement shares the infatuation. Many of the movement’s leaders remain wary of the former House speaker and cast a skeptical eye at his conservative credentials. In Gingrich, some see nothing more than baggage and a history of Romney-esque flip flops. Particularly troubling, they say, are his shifting views on global warming and health care overhaul.

“He’s got a long record that in some instances is difficult for Tea Partiers to follow,’’ said Mark Meckler of Georgia, a cofounder of Tea Party Patriots. “They see Newt as a political animal, but he is not alone in that problem. People are going to have to look at his record and decide what they believe: the previous Newt or today’s Newt?’’

National Tea Party movement leaders shy away from endorsing a particular candidate, saying that would run against the movement’s ethos. And despite Gingrich’s strong showing in the polls, their members continue to support a range of candidates. That includes not only Representative Ron Paul of Texas, who many Tea Partiers say best espouses the movement’s core principles of fiscal responsibility and small government, but who they fear will not be able to go head to head with President Obama, but also Romney, perhaps the least conservative of the bunch.

“Support right now among the Tea Party is pretty scattered and not exceptionally enthusiastically for anyone,’’ Meckler said.

The Tea Party movement helped propel dozens of Republicans to Congress in 2010 but is seen as having lost steam when it comes to making its imprint on the GOP primaries.

But Meckler takes issue with the characterization of the Tea Party movement as having lost influence because of its failure to back a particular candidate.

“You see all the leading candidates on the Republican side jockeying to be the strongest proponent of Tea Party ideas,’’ Meckler said. “We don’t trust that they all necessarily believe those things. We’re just happy they’re being forced to address them.’’

Public approval of the Tea Party movement has dropped since the 2010 midterm elections, even in congressional districts represented by members of the House Tea Party Caucus.

The latest poll conducted by the Pew Research Center shows that 20 percent agree with the Tea Party movement, down from 27 percent a year ago, following the sweeping GOP gains in the midterm elections. Criticism of the movement has mounted since the wrenching debt-ceiling confrontation of last summer.

Jeff Luecke, who helped found Iowa’s Dubuque Tea Party in 2009, said he believes the Tea Party has been unable to wield a wider influence on the presidential primaries because of a fissure within the movement.

“I’m afraid the Tea Party has split in two,’’ Luecke said. “There is the Republican branch and the original liberty branch. Thus you have a group of people who call themselves Tea Partiers who are dyed-in-the-wool establishment RINO [Republican in name only] Republicans. They’re supporting whatever flavor it is today.’’

Luecke, a Paul supporter, calls Gingrich “a Washington insider,’’ and says, “I don’t believe he is truly conservative.’’

Gingrich has caught flak from Tea Partiers for changing his mind on several key issues. For years he had supported an individual mandate for health insurance; now he no longer does. Earlier this year, he had to retract his description of House Budget Committee chairman Paul Ryan’s budget plan to privatize Medicare as “right-wing social engineering.’’

Some Tea Party movement members also dismiss Gingrich for what he now calls perhaps his “dumbest’’ mistake: sitting on a couch with former House speaker Nancy Pelosi for a 2008 ad urging action on climate change.

Others feel he is soft on illegal immigration because of his statement at a debate last month that to keep families together, he would not deport those who have been in the United States illegally for more than a generation. They also find his criticism of Freddie Mac in conflict with his work for the agency as a consultant.

But Gingrich’s combative ways, libertarian impulses, and intellectual rhetoric seem to cater to the Tea Party movement’s demand for a strong, independent leader.

Dan Lucore, a retired bricklayer and member of the Cedar Rapids Tea Party, said he could easily vote for Gingrich, his second choice after Paul. He noted that during Gingrich’s tenure as House speaker, the size of entitlement programs shrank and the budget was balanced.

“I always kind of liked Gingrich, but I never felt he was going to get the nomination,’’ Lucore said. “Now he’s raced to the top, and I think that’s based on his debating ability plus the issues he stands on and his experience.’’