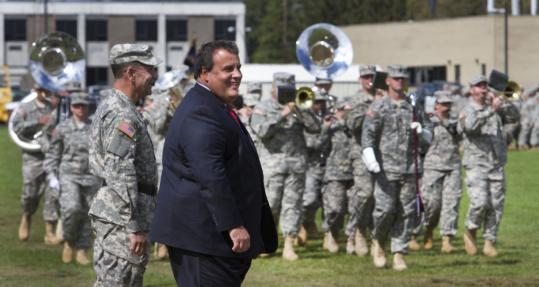 Governor Chris Christie of New Jersey should decide soon whether to seek his party’s nomination for the presidency in 2012, Republicans said on the Sunday television talk shows.

Christie, who has gained national attention for cutting government spending and challenging the benefits of public workers in his state, may make a decision within days, a Republican donor who asked not to be identified said last week.

Governor Robert McDonnell of Virginia, the chairman of the Republican Governors Association, praised Christie for his record as governor. He said he would be surprised if Christie decides to run.

“He’s an extraordinary communicator; he’s a great governor,’’ McDonnell said on NBC’s “Meet the Press.’’ “I just think whoever’s going to get in needs to do it immediately. We have got 90 days until the caucuses start in Iowa.’’

Christie’s decision could upend the race to challenge President Obama next year by taking on the leading contenders, Governor Rick Perry of Texas and Mitt Romney, a former Massachusetts governor.

Governor Haley Barbour of Mississippi, a Republican, said the speculation about Christie should not be seen as a sign of discontent about the other candidates for the nomination, and he predicted that the GOP can win the 2012 election if the contest is seen as a referendum on Obama’s economic policies.

“I think it’s a token of the regard that people have for Chris Christie,’’ Barbour said on CNN’s “State of the Union.’’

Perry addresses scrutiny over Texas camp name Governor Rick Perry’s campaign spent yesterday deflecting scrutiny of a report in The Washington Post detailing a Texas hunting camp he once leased with his father that includes a racial epithet in its name.

Yesterday’s story detailed Perry’s association with a property known as “Niggerhead,’’ a name that was painted across a large rock flanking the entrance. Perry has called the name “offensive’’ and said his father painted over the word shortly after leasing the land. That account conflicts with the those of seven people cited in the story, and it remains unclear when or whether Perry dealt with the name while using the camp.

One of Perry’s rivals for the GOP nomination, Herman Cain, criticized Perry on “Fox News Sunday’’ and ABC’s “This Week.’’

“There isn’t a more vile, negative word than the n-word,’’ Cain said on Fox. “And for him to leave it there as long as he did before he painted over it, it’s just plain insensitive to a lot of black people in this country.’’

The Perry campaign sought to control the damage and push back against Cain’s remarks.

“Mr. Cain is wrong about the Perry family’s quick action to eliminate the word on the rock, but is right the word written by others long ago is insensitive and offensive,’’ said Ray Sullivan, communications director for Perry’s campaign. “That is why the Perrys took quick action to cover and obscure it.’’

Huckabee grills Romney on conservative issues Onetime Republican rivals Mike Huckabee and Mitt Romney shared a stage again in an interview broadcast Saturday, as Romney sought the support of the socially conservative former Arkansas governor and the voters who backed him three years ago.

On his Fox News show, Huckabee pressed him on issues dear to conservative voters, such as abortion and same-sex marriage.

Romney said he would appoint conservative Supreme Court justices. And he defended his Massachusetts health care plan, saying he would have backed an amendment to the state’s constitution to prevent subsidizing abortion.