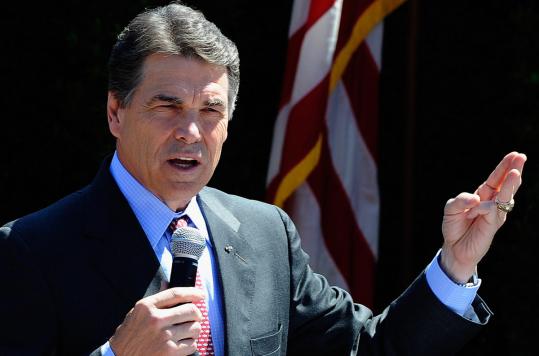 Governor Rick Perry’s record on immigration is offering fodder for critics on the right who see immigration as one way to drive a wedge between the Texan and conservative primary voters. (Kevork Djansezian/Getty Images)
By Michael Levenson Globe Staff / September 11, 2011

When it comes to policies aimed at illegal immigrants, Governor Rick Perry of Texas is on one side of the fence, his GOP rivals on the other.

“Those young minds are a part of a new generation of leaders; the doors of higher education must be open to them,’’ Perry said, hailing the law at an August 2001 border summit with dignitaries from Mexico and Texas in Edinburg, 16 miles from the Mexican border. “The message is simple: educación es el futuro, y sí se puede.’’

This year, Perry rejected Arizona’s harsh immigration law, saying it “would not be the right direction for Texas,’’ because it would turn police officers into immigration agents, distracting them from their existing law enforcement duties. He opposed plans to build a wall on the US-Mexico border, calling it “idiocy’’ that will “not work.’’ And he has said E-Verify, a federal program that allows employers to check the immigration status of workers, “would not make a hill-of-beans difference’’ in stopping illegal immigration.

It is the tough talk of the chief executive of a border state, a state with a long history of cultural and commercial exchange with Mexico, where the Latino vote is vital.

But now that Perry is running for the Republican presidential nomination, his long record on the issue, amassed over 11 years as governor, is offering fodder for critics on the right as well as political rivals, who see immigration as one way to drive a wedge between the Texas governor and the conservative voters who hold considerable sway in the primary. His record may also broaden the view of voters just now coming to know Perry and who may have thought of him as an unalloyed conservative on this as on other issues.

But the contrast between his record, and those of his rivals, remains stark.

Although jobs, the economy, and Social Security are center stage in the race, Mitt Romney has begun highlighting his own record on immigration, including his opposition to in-state tuition, which he calls a “magnet’’ for illegal immigrants. Some of Perry’s allies in the Tea Party movement have also criticized him as dangerously soft on illegal immigration.

At the same time, Perry’s decision to occasionally break with conservative orthodoxy on immigration could help him follow in the footsteps of his Texas predecessor, George W. Bush, whose moderate stances on the issue helped him capture an estimated 40 percent of the Latino vote in the 2004 presidential election.

Responding to conservative critics, Perry has, of late, been toughening his rhetoric on illegal immigration, even urging the federal government to send predator drones to patrol the US-Mexico border.

“Perry has to be careful about how to approach the issue,’’ said Jeronimo Cortina, a political scientist at the University of Houston. “He needs Latinos, so if he goes either too far to the right or too far to the left, he will potentially lose votes.’’

“There is a blending of cultures, so we don’t typically take the harsher positions you would see from a more northern state, and Governor Perry reflects that in his policies,’’ said Aaron Peña, a Republican state representative from the border town of McAllen. “The uniqueness of Texas, and our blended relationship with our Mexican neighbors, and the history of previously being a Mexican state, have all combined to create a culture that’s more tolerant, and sees things with more of a rugged Texas realism than some of the more extreme outbursts that you hear out there.’’

Perry’s positions also reflect the interests of influential Texas businesses - including construction and service-sector companies - which have funded his campaigns and rely on illegal immigrant labor. Business groups, for example, backed the in-state tuition bill, helping it overcome opposition in the Republican-led state Senate.

“It’s a workforce development issue from our perspective,’’ said Jeff Moseley, president and chief executive of the Greater Houston Partnership, a business group whose board includes executives of ExxonMobil, , and AT&T. “In a state that is as vibrant as Texas, where there’s such a demand for knowledge workers, it makes perfect sense that we would allow those who have academic credentials to go forward.’’

Some conservative Republicans disagree. David Rogers, a lawyer and activist in Austin, said Perry’s in-state tuition law not only lowered rates for illegal immigrants, it made them eligible for thousands of dollars in tuition grants.

“Of all the active presidential candidates, he is by far the worst on immigration,’’ said Rogers, who serves on the board of the hard-line Immigration Reform Coalition of Texas. “On immigration, Rick Perry is further to the left than John McCain and George W. Bush and further to the left than Barack Obama. Has Barack Obama proposed anything that gives a $20,000 subsidy to illegal aliens?’’

Romney, the former Masachusetts governor, has sought to exploit that anger. In a Sept. 2 speech to a Hispanic Republican group in Florida, he underscored his support for a border fence, his 2004 veto of an in-state tuition bill, and his order, issued a month before he left office to run for president, that directed state troopers to enforce immigration laws.

But Romney has also shifted on the issue. For example, he opposes bills that would offer a pathway to citizenship for the nation’s 11 million illegal immigrants, calling them “amnesty,’’ even though he said in 2005 that they were “reasonable proposals.’’

Perry shares Romney’s view on this issue. And he has been gradually hardening his stance on illegal immigration, drawing the ire of his allies in the corporate world.

This summer, as he prepared to enter the presidential race, he pushed legislation that would have prohibited Texas from allowing “sanctuary cities’’ where police are barred from asking about the immigration status of people they detain. The bill only died after several prominent business executives and Perry donors began lobbying against it. With federal tools available to combat illegal immigration, “we just didn’t think it was really necessary,’’ Moseley said.

Perry also opposes the federal Dream Act, which would open a path to citizenship for certain illegal immigrants who complete two years of college or military service. Despite the bill’s similarities to Texas’s in-state tuition law, Catherine Frazier, a Perry spokeswoman, said: “The federal Dream Act is a completely different piece of legislation covering many more issues than just in-state tuition.’’

Perry also argues that Congress should not consider naturalizing illegal immigrants until the borders are secure.

Democrats say those stances show Perry, despite his support for in-state tuition and criticism of the Arizona law, is no moderate on illegal immigration.

“The governor over the years, basically, has been two-faced about immigration issues and the Latino community,’’ said state Senator José Rodríguez, an El Paso Democrat. “He wants to, on the one hand, appear friendly to Hispanics because he needs their votes but, on the other hand, he calls for these very harsh measures that are detrimental to the Latino community.’’