As one faction welcomes Romney, another recoils 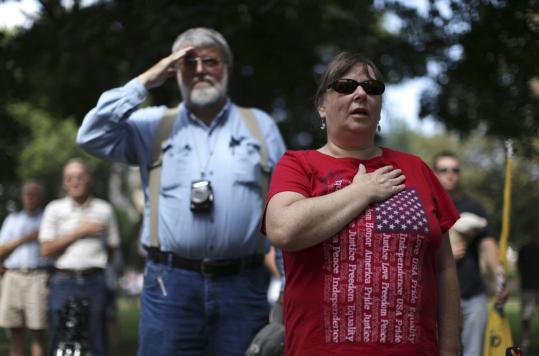 DES MOINES - Its tandem of colorful buses was greeted by minuscule crowds this week in Iowa. But no matter. A triumphant mood prevailed among the merry band aboard the Tea Party Express, from Sharron Angle, a former Senate candidate from Nevada, down to the Tea Party rapper in baggy jeans.

The organizers of the rally are excited about their cosponsorship of a GOP primary debate this month, which will be hosted by “lamestream media’’ powerhouse CNN. They have drawn considerable media to the cross-country trip, which will tour through New England before heading to the debate site in Tampa. And Mitt Romney is scheduled to rendezvous with the Tea Party Express tomorrow in New Hampshire. It will mark the first appearance at a Tea Party rally of the candidate who has fashioned himself more as an establishment Republican, a former businessman who knows what ails the economy.

Yet even while racking up political successes, the Tea Party’s fractured leadership and increasingly negative public image are stunting its maturation as a cohesive political force within the GOP. News coverage this week focused less on the Tea Party’s goals of shrinking government and cutting taxes and more on internal squabbling.

In another move that roiled Tea Party blogs, a group calling itself Tea Party of America - which public records show incorporated just a month ago - fumbled its first big moment. It said Sarah Palin would attend a rally near Des Moines planned for today, then scrambled to manage the story as it appeared she would back out. Now the former Alaska governor is on board and expected to headline the rally, but Christine O’Donnell, a failed Senate candidate from Delaware, is off the roster.

The quest for attention and money by competing groups is angering some Tea Party grassroots organizers.

“I think these national groups are the ones giving the Tea Party a bad name,’’ said Jeff Leucke, a leader of the Dubuque Tea Party. “They are taking the corporate money. They are shills for the Republican Party.’’

The jumbled, hydra-headed nature of the movement is making it easier for opponents to paint it as extreme, even dangerous, and incapable of national leadership, political specialists said.

“They are a nonviolent version of the opposition in Libya,’’ said Steffen Schmidt, a political science professor at Iowa State University. “Tea Party candidates come in too many different flavors. They are unruly, uncontrolled. This is very confusing to people.’’

What information does trickle through to voters, he said, tends to be threats by Tea Party activists and like-minded public figures against federal programs that many Americans view as important, such as Medicare and environmental protection.

A half-dozen groups, including Tea Party Express and FreedomWorks, claim to represent Tea Partiers at the national level. Locally, the numbers of offshoots have exploded. In Iowa alone, more than 50 groups have set up local Tea Party websites, with virtually no unifying structure. The most serious state-level organizing work remains dependent on millions of dollars contributed by wealthy business interests that remain in the shadows, protected by federal election laws that allow unlimited, undisclosed donations.

For 2012, the question remains whether divided Tea Partiers will split their support among the conservative GOP candidates - including Governor Rick Perry of Texas, Representative Michele Bachmann of Minnesota, and Representative Ron Paul of Texas - which could help Romney win the nomination.

In the general election, if the influence of Tea Party groups pulls the nominee too far to the right, that could produce the presidential version of Angle or O’Donnell. Angle, the 2010 Republican nominee for Senate in Nevada, and O’Donnell, her counterpart in Delaware, shocked the GOP establishment with upset victories in their primaries but failed in the general election against Democrats, who painted them as extreme.

“The Republican wise men, they are not in control,’’ said Harvard sociology professor Theda Skocpol, whose book on the Tea Party’s motivations and organization is scheduled for publication this fall.

The Tea Party Express political road show is put on by a team of longtime Republican activists and consultants from California with a knack for political stagecraft, marketing, and fund-raising but with no grass-roots organization to speak of. In 2010, Tea Party Express sponsored a rally on Boston Common featuring former Alaska governor and vice presidential candidate Palin.

About 70 percent of the $1.4 million raised in the first six months of this year by Tea Party Express’s affiliated political action committee, Our Country Deserves Better, has been spent on administrative expenses, including an array of direct-mail companies, consultants, and fund-raisers, some of whom are Tea Party Express organizers, according to the Center for Responsive Politics, a nonpartisan group that tracks money in politics. Only 4 percent was spent on direct contributions to federal and state candidates .

Our Country Deserves Better is led by Howard Kaloogian, a former California state lawmaker and conservative activist who led the effort to effort to recall former California Governor Gray Davis in 2003. Kaloogian said the Tea Party Express spends large sums advertising on behalf of local and statewide candidates rather than channeling contributions directly into their campaigns, as many other PACs do around the country. Kaloogian added that the lack of an overarching Tea Party organization or strategy is not a concern.

“Diversity is our strength,’’ he said. “We’re individualists. We’re not going to agree all of the time.’’

Also vying for a national leadership role in conservative advocacy are, among others, FreedomWorks, led by former House majority leader Dick Armey; Americans for Prosperity, which is backed by billionaire David Koch; and Tea Party , which has a website listing hundreds of loosely affiliated organizations around the country.

Way down on the food chain are individual organizers like Ryan Rhodes, a 29-year-old with little more in the way of political infrastructure than a beat-up Oldsmobile and an iPad.

Rhodes, a former car salesman who lost his job when Chrysler closed the dealership where he worked, launched the Iowa Tea Party when the movement was still in its brushfire phase, with an Independence Day rally in Des Moines in July 2009.

In an interview at a Des Moines this week, Rhodes said he is considering what direction to take in a crowded field of national and local Tea Party-aligned groups.

“I don’t believe that any of the national groups speaks for us at all,’’ said Rhodes.

The work of groups like Americans for Prosperity in individual communities may create the most enduring Tea Party presence. Americans for Prosperity says it has chapters in more than 30 states, including New Hampshire, where state director Corey R. Lewandowski estimates he has held 100 training sessions for local activists over the last two years. Lewandowski schools them on how to get public records from their town halls and launch crusades against excessive government spending in their communities.

The steady work of showing up at events with banners and handing out copies of the US Constitution is reaping tangible rewards in Iowa, said Lonnie Bauerly, of Spencer, Iowa, who has set up a booth within sight of motorists arriving at the Clay County Fair.

Correction: Because of a reporting error, an earlier version of this story gave an incorrect year for the recall election of former California governor Gray Davis. Davis was recalled by California voters in 2003.