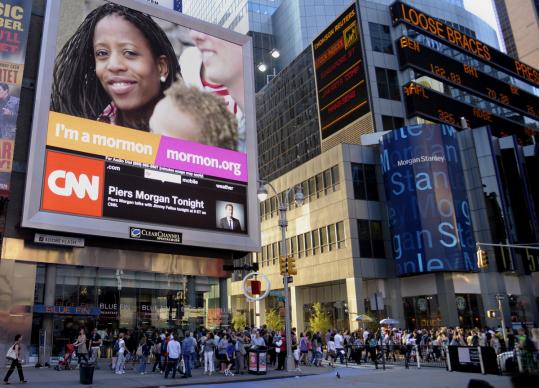 A Times Square billboard in New York is part of a Mormon ad campaign to counter negative attitudes toward the faith. (Peter Foley for The Boston Globe)
By Lisa Wangsness Globe Staff / June 20, 2011

SALT LAKE CITY — In the fall of 2008, the Church of Jesus Christ of Latter-day Saints convened focus groups across the country as part of a major market-research study to learn more about anti-Mormon sentiment in America.

The researchers found that the most common negative associations with Mormonism included being “pushy,’’ “cultish,’’ “secretive,’’ “controlling,’’ “sexist,’’ “antigay,’’ and “polygamist.’’ There was scant interest among those surveyed in learning more about Mormon doctrine, but they did display curiosity about Mormons as people.

“I’ll never forget this one woman,’’ said Stephen B. Allen, managing director of the church’s missionary program. When participants were asked how they would feel about doing community service with Mormons, “She said’’ — Allen adopted a stage whisper — “if you are serving alongside them, you can ask them the questions you always wanted to ask.’’

The result of the research was the “I’m a Mormon’’ ad campaign, a major rebranding effort.

The effort overlaps with a political campaign that, for the first time, includes two Mormons who are presidential contenders — former governors Mitt Romney of Massachusetts, who is in the race, and Jon Huntsman of Utah, who plans to announce his candidacy tomorrow.

Both men will have to over come the same unease about Mormons the ads seek to diminish. At the same time, pop-culture forces like “The Book of Mormon,’’ an irreverent Broadway musical hit about of two naive Mormon missionaries who are sent from Utah to Uganda to proselytize, have driven public interest in Mormonism to new heights.

The ad campaign features self-narrated video portraits of young, energetic Mormons with diverse backgrounds and eye-catching interests like surfing and violin-making. Tested in nine markets last summer, the campaign popped up on an electronic billboard in Times Square last week, days after “The Book of Mormon’’ cleaned up at the Tony Awards. The ad campaign is scheduled to run in 24 to 29 markets nationwide this fall.

In Salt Lake City, home to the church’s vast worldwide headquarters, the notion that the country is in the grip of a “Mormon moment,’’ as a recent Newsweek cover proclaimed, provokes some eye-rolling. Still, Mormons here are intensely interested in what it all could mean.

Governor Gary R. Herbert, a Mormon and Huntsman’s former lieutenant governor, thinks all the attention is a good thing, a sign that his church is slowly but surely becoming less mysterious to outsiders.

“With heightened awareness comes understanding,’’ he said in an interview in his State House office, just a few blocks away from Temple Square.

The extent to which Romney’s religion affected his 2008 candidacy is a matter of debate. But Romney himself has acknowledged that his campaign may have been too optimistic about its ability to win over some in the evangelical community, which turned out in droves in Iowa and South Carolina to vote for Mike Huckabee, a Baptist preacher.

Some political analysts believe that religion is likely to be less of a factor in 2012.

“This is an election about economic fundamentals,’’ said Michael Dimock, associate director for research for the Pew Center for the People and the Press. “At a time like this, more than ever, somebody’s faith I think is going to be low on the public’s priority list.’’

Mormon leaders emphasize that their ad campaign is not an attempt to help Romney or Huntsman. To underscore that point, they say the church will not buy air time in media markets in early primary states. Its principal purpose, Allen said, is to “dispel the myths and misperceptions’’ about Mormons, a critical task for a religion that considers proselytizing an ecclesiastical mandate.

“Our motivator was, how do we help these young missionaries who are donating two years of their time and paying their own way and working their guts out overcome some of the obstacles, so they can share their message more openly?’’ said Allen in an interview in his Temple Square office last week.

Polls have consistently shown that anywhere from one-quarter to one-third of US voters have reservations about voting for a Mormon, a figure that has not budged much since Romney’s father, George Romney, ran for president in 1968, said David Campbell, a political scientist at the University of Notre Dame.

“In general, I think attitudes about religion have moved very slowly,’’ Dimock said.

The Mormon skeptics fall into two distinct groups, polls suggest: evangelical Christians who consider Mormons to be members of a cultish faith that espouses heretical views of Christianity, and moderates and liberals who disagree with Mormons’ views on social issues such as gay marriage. (The Mormon church considers the practice of homosexuality a serious sin; it requires gay people to remain celibate and has campaigned for years against gay marriage.)

The “I’m a Mormon’’ ads, along with extended video profiles at the church’s website, mormon.org, may appeal to both groups, but in different ways.

The profiles showcase people demonstrating values that strongly religious people of any faith would recognize: a high school senior who bakes cookies with her nieces, a mom juggling her children’s sports and music lessons, an idealistic urban schoolteacher who works with poor children.

But the subjects are also young people from a wide range of ethnic and racial backgrounds, reflecting the diversity of a global church that now has a majority of members outside the United States. The high school senior loves yoga and volunteers on a charitable mission in the Middle East; the doting mother is French but lives in Germany; the schoolteacher is Haitian-American and loves to host dinner parties for her young professional friends.

“I call them the ‘Mormons are surfers, too’ ads,’’ said Patrick Griffin, a New Hampshire GOP media consultant who has not signed on with any candidate this cycle. “The theme is, ‘It’s normal to be Mormon.’ ’’

Survey data collected by the church found that negative associations with the word “Mormon’’ — from “cultish’’ to “sexist’’ — dropped noticeably in the test markets that ran the ads last summer. Even “antigay’’ associations dropped, a mystery to even the Mormons, since none of the ads features someone who is gay or who advocates for gay rights.

Among the public relations problems that Mormons face, many pollsters and social scientists say, is Americans’ lack of familiarity with Mormonism.

In their book “American Grace,’’ Campbell and Harvard political scientist Robert Putnam write that among adherents of all the major US religions, Mormons are the least likely to forge close family ties or friendships with members of other faiths.

This lack of what Campbell and Putnam call “bridging’’ may be why a 2007 Pew study found that just 53 percent of Americans held a favorable opinion of Mormons — Muslim-Americans had the same favorability rating — compared with 76 percent for Catholics and Jews.

Those results show the issue is not simply about being a minority faith — Judaism and Mormonism have about the same share of the US adult population — about 1.7 percent.

For a century between the mid-1800s and mid-1900s, Mormons were geographically isolated, heavily concentrated in the West, where they fled to avoid religious persecution.

In the past half-century, that has changed, as new converts have entered the faith and migration to other areas of the country for educational and professional opportunities has helped establish vibrant Mormon communities around the country.

But the time requirements make it challenging to socialize outside the church: Sundays are three-hour blocks of worship and study, and because churches are entirely run by laypeople, most adults have “callings’’ — or jobs within the congregation — ranging from bishop to janitor.

Also, most Mormon adults are assigned to visit with — and be visited by — other adults on a regular basis. Mormon men, working in pairs, are “home teachers’’ assigned to visit one or more families per month, offering a short religious message as well as whatever practical help or emotional support a family might need. Women are “visiting teachers’’ and do the same for each individual woman.

And for Mormons, marrying within the faith is not merely encouraged; only members in good standing can have a temple marriage, which Mormons believe is required to create an eternal bond as well as an earthly one.

The ad campaign introduces the audience to Mormons by guiding them to mormon.org, where viewers can see expanded video portraits, plus photos and written profiles of thousands of other Mormons and learn more about what they believe. Visitors to the website can search a database for profiles of Mormons with demographics similar to their own.

“It’s an interesting way of getting around this geographical isolation and this bridging problem,’’ Monson said, “or at least attempting to get around it.’’