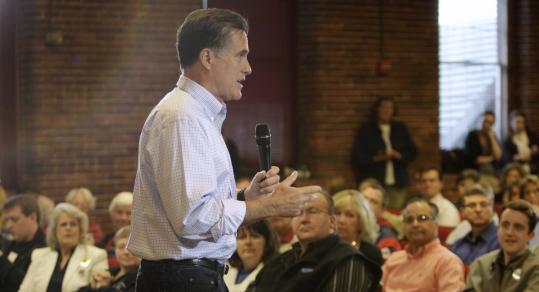 MANCHESTER, N.H. — In the first town hall of his freshly announced presidential campaign, Mitt Romney yesterday reaffirmed his view that global warming is occurring and that humans are contributing to it, a position that has been rejected in recent years by many Republicans as the issue has taken on a greater partisan tinge.

After opening remarks in which Romney blamed President Obama’s policies for the new anemic hiring figures, the first questioner from the floor — a software developer from Hanover, N.H. — wanted to know the candidate’s position on climate change, an issue his opponents have generally avoided so far.

“I don’t speak for the scientific community, of course,’’ Romney said. “But I believe the world’s getting warmer. I can’t prove that, but I believe based on what I read that the world is getting warmer. And number two, I believe that humans contribute to that . . . so I think it’s important for us to reduce our emissions of pollutants and greenhouse gases that may well be significant contributors to the climate change and the global warming that you’re seeing.’’

Romney has made clear that he opposes cap-and-trade, a system that would combat climate change by limiting total emissions and forcing polluters to pay for the greenhouse gases they produce. Instead, he said yesterday, he wants to wean the country from its dependence on foreign oil by seeking alternative sources of energy, and he said Americans should do more to conserve.

“I’m told that we use almost twice as much energy per person as does a European, and more like three times as much energy as does a Japanese citizen,’’ Romney said. “We can do a lot better.’’

If elected, he said he would pursue more oil drilling, as well as natural gas and nuclear energy.

Romney’s comments were in line with his observations about global warming in his 2010 book, “No Apology.’’ In it, he wrote: “I believe that climate change is occurring — the reduction in the size of global ice caps is hard to ignore. I also believe that human activity is a contributing factor.’’

But his views on climate change are not shared by many in his party, particularly conservatives who often have outsized influence in the presidential nominating contest. According to a Pew Research Center for the People and the Press poll in October, just 38 percent of Republicans say the earth is warming and just 16 percent say it is caused by humans.

Several of Romney’s Republican rivals are also taking divergent stances on the science behind global warming.

Jon M. Huntsman Jr., the former Utah governor who is toying with a presidential bid, indicated in a Time magazine interview last month that he believes climate change is occurring. Former Minnesota governor Tim Pawlenty recorded a radio spot in 2007 calling on Congress to take action on climate change. But last month at a debate in South Carolina, he disavowed his past position. “I don’t duck it, bob it, weave it, try to explain it away,’’ he said. “I made a mistake.’’

Former House speaker Newt Gingrich has also shifted positions on the issue. In 2007, he told PBS that the weight of evidence over time convinced him of the need to do something about global warming. The next year, he appeared with then-House Speaker Nancy Pelosi in an ad saying Congress needed to take action on climate change.

But last month he said such concerns were overblown, telling The Telegraph of Georgia: “When I see 6,000 scientists sign something, that’s called political science. That’s not science.’’

“The planet used to be dramatically warmer when we had dinosaurs and no people,’’ he said. “To the best of my knowledge the dinosaurs weren’t driving cars.’’

Romney’s town hall came on a day where activity in the first-in the-nation primary state continued to buzz. Sarah Palin had breakfast yesterday in Portsmouth with Senator Kelly Ayotte and later said she planned to take her bus tour to Iowa and South Carolina, two early-voting states.

As an indication of the harried nature of the campaign, Huntsman and his wife — on their way to New Hampshire for weekend campaign events — arrived at Logan International Airport on the same airplane that Romney and his wife got on to fly to Washington (the two potential rivals did not appear to see each other in the terminal). Romney, who sat in coach, arrived in Washington, bought a pretzel at Auntie Anne’s, and then spotted Secretary of State Hillary Rodham Clinton.

“Madam Secretary!’’ he cried out, as he extended his hand. “Mitt Romney. Nice to see you.’’

Romney’s town hall in Manchester marked the first time this year he has faced voters in the unscripted forums that New Hampshire prides itself on. On his campaign’s favorite theme, the weak economy, Romney used the newly released unemployment data to continue his sharp critique of Obama.

“Look he’s a nice guy, he’s well spoken, he could talk a dog off a meat wagon, and yet he hasn’t delivered,’’ the former Massachusetts governor said in a lecture hall at the University of New Hampshire’s campus here.

Even last night, as he addressed Christian conservatives at a forum in Washington, he devoted much of his 13-minute speech to economic issues. Only at the beginning of the address did he mention social concerns, reiterating his opposition to abortion and gay marriage.

At the town hall, Romney continued talking about cutting spending, but he did not identify areas to target. He said he supported the general goals of a politically dicey proposal from House Republicans that would partially privatize Medicare.

“No one in my party has proposed any change for those programs for anybody who’s retired or who’s near retirement,’’ he said. “The question is: What are we going to promise people in their 20s, 30s, and 40s? And the answer is, let’s tell them the truth.’’

Romney, who has been loathe to bring up social issues after struggling to reconcile some of his shifting positions on them four years ago, also took a question on abortion. A man asked whether there should be criminal sanctions against doctors who perform abortions in states that make them illegal.

“I think the right thing for matters related to abortion is very similar to one I’ve described in other measures, which is return this to the states,’’ Romney said. “I’m pro-life, and I think this is a decision best handled, like many other things, at the state level.’’

Theo Emery of the Globe staff contributed to this report. Matt Viser can be reached at maviser@globe.com.