Bachmann: Two if by land, one if by sea 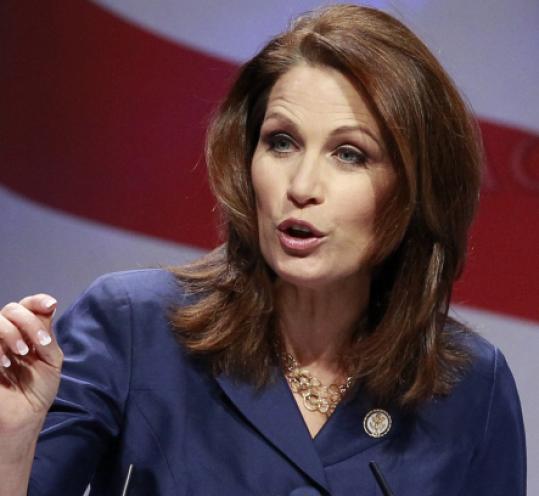 “You’re the state where the shot was heard ’round the world at Lexington and Concord.’’ — Representative Michele Bachmann in Manchester, N.H.

It’s less than a year until the New Hampshire primary, and many GOP hopefuls are testing the waters, including Michele Bachmann of the great state of Minnesota, proud home of Mount Rushmore . 1 Bachmann, of course, is one of the leading voices of the Tea Party movement, which scored a landmark victory in last year’s Senate race in Kentucky, the country music capital of the world, 2 and came very close in the Grand Canyon state of Nevada.3 As a result, the congressional Tea Party caucus is gaining clout in Washington, D.C., where and usually hold sway.4

The Tea Party asks that the US government return to its revolutionary roots, back when George Washington crossed the 5 and wintered his troops at snowy Saratoga,6 setting the stage for victory. Bachmann contends that President Obama’s expansion of the federal government is a form of tyranny similar to that which the colonies experienced under Louis XIV. 7 No analogy is perfect, however, and the past isn’t always prologue, as Shakespeare opined in “Romeo and Juliet.’’8 Bachmann’s critics decry her looseness with the facts, while her supporters believe her values are solid, even when she errs. Nothing she said on Saturday in Manchester is likely to change that dynamic.