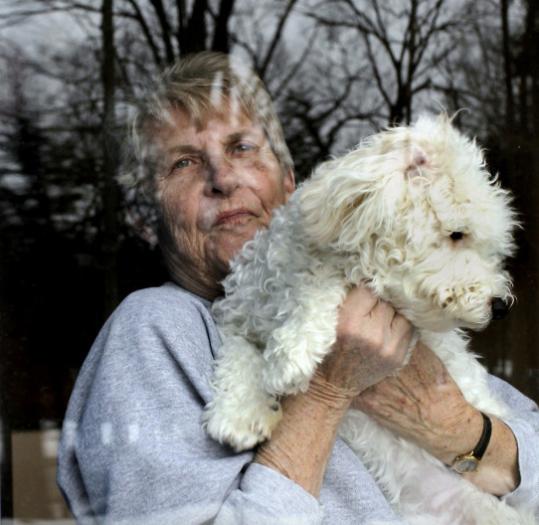 HAMPTON, N.H. — Breaking their silence, US Senator Scott Brown’s mother and sister yesterday defended the truthfulness of his best-selling memoir and described a childhood home racked with violence.

They gave their first interviews since the book was published last month after learning that one of Brown’s stepfathers, Frank “Larry’’ McShane, accused the senator of fabricating assertions that he beat him as a teenager.

“It was a horror show, that’s what it was,’’ said Brown’s 72-year-old mother, Judith, about her marriage to McShane in the late 1970s.

“Everything that’s in the book is the truth,’’ she said in an interview with the Globe on the doorstep of her home here. “My son has done very well under adverse circumstances.’’

Brown, 51, devoted an entire chapter to McShane in his book, “Against All Odds,’’ a surprisingly revealing memoir in which he also described being sexually abused by a camp counselor when he was 10 years old.

In the chapter about McShane, Brown said his stepfather beat him frequently when he was a Wakefield high school senior and threatened to break his hands. Brown was a talented basketball player who won an athletic scholarship to Tufts University.

During a telephone interview Tuesday night from his home in Palm Har bor, Fla., McShane said the chapter is “90 percent lies or mistruths.’’

McShane, who grew up in Wakefield and was a high school baseball coach before retiring to Florida about eight years ago, first spoke about Brown’s book to the Wakefield Daily Item.

McShane, during his interview with the Globe, accused Brown of exaggerating the obstacles he had overcome in his life and fabricating the abuse.

“He’s looking for the sympathy vote,’’ he said.

The disclosures in Brown’s book are not the first time McShane has been accused of being abusive.

When McShane’s first wife divorced him in 1970, she accused him of “cruel and abusive treatment’’ and said she was afraid of him, according to the probate court record.

By McShane’s own admission, Judith Brown accused him of throwing her against a brick wall when she filed for divorce after they were married over a year, prompting police to evict him from the house until the divorce was settled.

In a telephone interview yesterday, Scott Brown’s sister, Leeann Riley, a 45-year-old mother of two, described McShane, who was with her mother for several years, as a violent alcoholic. She said he traumatized her, her mother, and teenage brother after they moved into his newly built Wakefield home on June Circle, an upscale neighborhood.

“As a child it was scary to live there because you never knew when the violence would erupt,’’ said Riley, who was in elementary school when her mother married McShane. “I never really wanted to have friends over to the house. It wasn’t a warm welcome place.’’

Riley recounted being thrown against a wall by McShane when she was in fifth or sixth grade and tried to stop him from beating her mother.

“He had her up against the wall and was choking her neck,’’ Riley said during a telephone interview. “She was blue. She couldn’t breathe. I kicked [McShane] from behind and he threw me across the room, against the wall.’’

Riley said McShane’s elderly mother, who lived in an in-law apartment in the house, rushed into the room to restrain her son.

Riley and Judith Brown have stayed away from the spotlight, keeping a low profile during Scott Brown’s remarkable rise to prominence, a contrast to Brown’s two daughters, who appeared in his campaign ads and occasionally bantered with the media. But his mother and sister spoke out yesterday after McShane began attacking the credibility of the book.

“I guess what surprises me is he’s not asking for forgiveness,’’ Riley said of McShane.

In a statement, he said: “My mother, sister and I are not surprised that Larry is denying the violence and physical abuse. But we have worked hard to move past those difficult times of our lives. We aren’t out to settle any scores. Like most families, we are a work in progress and we are very proud of the family we are today.’’

Judith Brown, a slender, plain-spoken woman, said she supported her son’s decision to describe his life in such intimate detail. “It’s about his life,’’ she said. “It wasn’t easy.’’

But the retired secretary said it has been difficult to relive the past and deal with McShane’s accusations.

“It was painful to read,’’ she said of the book. “All this brings up a lot of bad memories.’’

Judith Brown, who answered the door in a sweatshirt and jeans, was friendly, laughing often as she described her quiet life with her puppy, Charlie, and her two aging cats.

When she talked about her marriage to McShane, her fourth husband, she was matter-of-fact, expressing regret, not self-pity.

McShane said he has never been charged with assault and his girlfriend of 20 years said he has never been violent with her. His only criminal record in Massachusetts is a 1989 drunken driving conviction which resulted in probation. In 1974, a jury awarded him $830,000 after he was seriously burned and lost his fingers in a gas explosion in Charlestown.

McShane said that Judith Brown made up the abuse in an effort to get some of his assets.

She denied his version of events. “That’s a joke,’’ she said. “There is a lot more that could be in [the book], believe me.’’

Judith Brown said she has tried to put her past behind her and is proud of how far her children have come.

Shelley Murphy can be reached at shmurphy@globe.com and Maria Cramer at mcramer@ globe.com. John R. Ellement of the Globe staff contributed to this report.