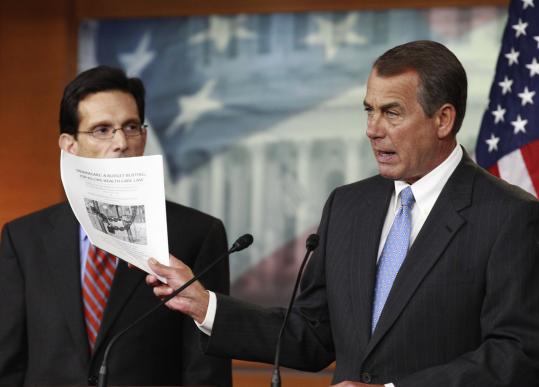 House Speaker John Boehner held a copy of a proposal to repeal the health care law during a press conference yesterday. His office gave no indication whether he would back a repeal of the financial overhaul law or support a less drastic approach. (Alex Brandon/Associated Press)
By Donovan Slack Globe Staff / January 7, 2011

WASHINGTON — A group of Republican lawmakers demanded the repeal of the financial regulatory law coauthored by Representative Barney Frank of Newton yesterday, saying the measure is hurting the economy and should be jettisoned along with the health care law.

The law is a costly burden to business and a power grab by the government, said Representative Michele Bachmann, a Minnesota Republican and Tea Party leader who introduced the repeal measure with four cosponsors. “[It] grossly expanded the federal government beyond its jurisdictional boundaries,’’ said Bachmann, calling provisions that allow the Treasury to seize and liquidate failing institutions “a frightening abuse of power.’’

The proposed repeal is a piece of a broader GOP effort to rein in regulation of businesses. The legislation overhauling financial rules, which passed with crucial support from Senator Scott Brown, the Massachusetts Republican, is the cornerstone of the Obama administration’s effort to ensure there is never a repeat of the 2008 market meltdown, the worst financial crisis since the Great Depression. It imposes new regulations on banks and creates a host of measures to protect consumers.

Frank lambasted the backers of the repeal effort.

“They yearn to return to the thrilling days of yesteryear, so the loan arrangers can ride again — untrammeled by any rules restraining irresponsibility, excess, deception, and most of all, infinite leverage,’’ said Frank, who coauthored the legislation in his role last year as chairman of the House Financial Services Committee and worked with Senator Christopher J. Dodd, Democrat of Connecticut, to pass it.

Republicans — who took control of the House Wednesday — cast the financial regulations law as a job-killing drag on a stuttering economy, like the health care law.

In contrast to the proposed repeal of the health care law, which GOP House leaders made a priority and expect to win an expedited vote next week, the prospects in the House for tossing aside the financial rules are unclear. The office of Speaker John A. Boehner of Ohio, who had called the Dodd-Frank law “ill-conceived’’ and said last summer it should be repealed, gave no indication yesterday whether he would back a repeal or support a less drastic approach.

Even if Bachmann and her colleagues succeed in the House, the bill would have little chance of advancing in the Senate, which Democrats still control.

Republicans may instead rely on other tools to weaken the law. Frank’s replacement as head of the House Financial Services Committee, Republican Spencer Bachus of Alabama, has said he wants to change certain provisions. Democrats are also girding for potential attempts to withhold funding to implement the overhaul.

Efforts to derail the regulations run a risk for Republicans because Americans appear to generally support the law. A Gallup poll taken last fall showed it was among the most popular bills passed since President Obama took office, with 61 percent of those surveyed approving of it, compared with only 39 percent who approved of the health care overhaul. Also, an anti-Wall Street sentiment still simmers among many Americans.

“They’re reluctant to make a head-on assault because they know it’s too popular, so the real strategy is going to be death by 1,000 cuts,’’ Frank said of Republicans in an interview yesterday.

The financial regulations law was one of the president’s major legislative accomplishments of his first two years. The law broadens oversight on ratings companies and financial services firms, bolsters the role of the Federal Reserve in detecting systemic risks to the entire financial system, and regulates derivatives, the risky trading products that were blamed for accelerating the financial crisis in fall 2008. It also established the Bureau of Consumer Financial Protection, which is being set up by Harvard professor Elizabeth Warren.

The bill was passed only after last-minute negotiations between Democrats and Brown over provisions limiting proprietary lending by some companies and over how the regulations would be funded. Brown won concessions for such companies as MassMutual in the final bill.

His office declined yesterday to comment on Bachmann’s effort to repeal the law.

Many details of the law were left for regulators to hammer out in the coming months, and agencies such as the Securities and Exchange Commission and the Commodity Futures Trading Commission need more money to hire workers to write and enforce the rules.

Democrats tried to fully fund implementation through an omnibus spending bill in the lame-duck session of Congress last month, but Senate Republicans rejected that effort. Republicans are now in a position to withhold funds for implementation when a continuing budget resolution expires in March.

Advocacy groups that fought for passage of the financial regulatory overhaul said yesterday that repealing or weakening the law could lead to a repeat of the financial crisis from which the country is still trying to recover.

“The thought that we would go back to the status quo on Wall Street is outrageous,’’ said Lisa Donner, executive director of Americans for Financial Reform, noting that “unchecked recklessness on Wall Street’’ led to the loss of millions of jobs, foreclosures, and the evaporation of millions of dollars in senior retirement savings. “We can’t let that happen again. We can’t repeat the same mistakes that got us here.’’

Bachmann, with Republican cosponsors Todd Akin of Missouri, Darrell Issa and Tom McClintock of California, and Bill Posey of Florida, plans to push forward with the repeal measure, even if its chances of passing Congress are slim. She feels the same way about health care repeal.

“What the House needs to do is take these votes, make a very serious and real effort to repeal these bills and put it before the Senate,’’ Bachmann’s spokesman Doug Sachtleben said.